Ball out of the Family 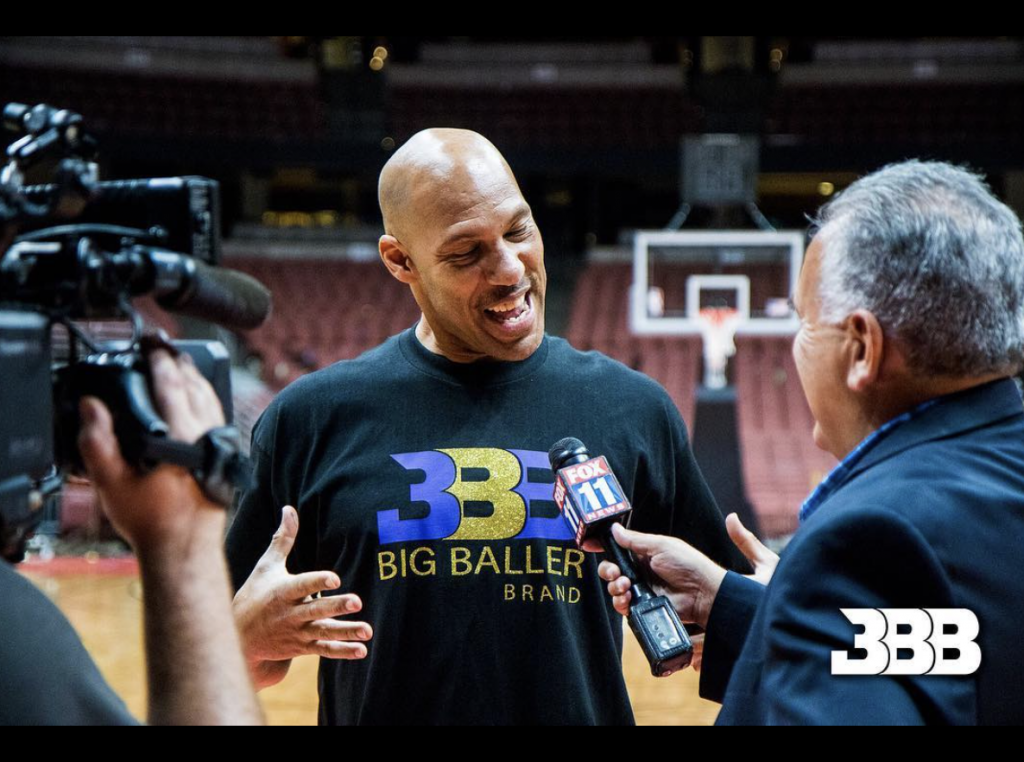 LaVar Ball, the delusional so-called ‘brand ambassador’ and creator of the Big Baller Brand (BBB) has undoubtedly lost his mind. Ball, who rose to fame by being featured in CBS articles, and SLAM magazine is a media fanatic who can’t seem to stand being out of the spotlight. His outrageous claims, such as “Back in my heyday, I would have killed Michael Jordan one-on-one,” and “I’ll tell you right now, [Lonzo] is better than Steph Curry” have taken the media by storm. Claims that Lonzo is better than huge basketball players first emerged when he was still playing basketball at UCLA in early 2017. These kinds of outlandish claims have the media attached to his personality. LaVar’s foolish claims about his sons, Lonzo, LiAngelo and LaMelo have increased his notoriety. Especially through the backlash after LiAngelo Ball, an ex-freshman at UCLA university got caught stealing a pair of sunglasses from Louis Vuitton in China late in 2017. Following LiAngelo’s arrest and suspension from playing basketball for the entirety of his freshman season, LaVar proceeded to make a vacuous image of himself. LaVar proceeded to not thank President Trump after he saved LiAngelo and teammates from possible jail time, sparking a spat between Trump and the family.

As seen on the facebook show Ball in the Family, the entirety of the Ball family puts a negative image on themselves and on the sport of basketball. The humiliation of LiAngelo’s arrest and the lack of recognition of the crime from LaVar is outrageous. Furthermore, it is even more shocking that the media is taking airtime to talk about the subject. Ball who has attention and fame for the wrong reasons, continuously bashes other sports stars and compares his sons to the talents of Steph Curry, Russell Westbrook and Magic Johnson. He has become the Kardashian of the sports press, as his fame is attributed to false claims and outrageous quotes.

After the incident, LiAngelo and LaMelo were moved by LaVar to play in the Lithuanian pro basketball league with 10 teams, through LaVar’s hopes for a high pick for LiAngelo in the 2019 NBA draft. On January 13th, in the boys pro debut for the Lithuanian team BC Prienai – Birstonas Vytautas, LiAngelo and LaMelo combined for zero points with a combined playing time of 15 minutes and 16 seconds. More recently, on January 24th, the fourth game of the Big Baller Challenge games, LiAngelo Ball had 39 points, and 10 rebounds and LaMelo had a whopping 43 points. The Ball brothers combined for over half the team points of BC Vytautas, as the team won the game 147-142 in overtime.

As of January 28th, in LaVar’s first game as head coach of BC Vytautas, they won 151-120 over BC Jonava, the current 6th place team in the second Lithuanian division. There was practically no defense, only offensive presence. During the game, LaMelo recorded his first triple-double in a pro-game, with 40 points, 11 rebounds and 10 assists. LiAngelo had 31 points, 8 rebounds and 5 assists. Also, there were only 2 minutes 52 seconds where LiAngelo and LaMelo were not on the court together. More importantly, LaVar now has the confidence that in his two games as some form of coach on BC Vytautas, he has never lost.

The most important object of LaVar’s career and brand is the publicity he receives and the brand portrayal in media. After receiving an F from the Better Business Bureau, Ball proceeded to blame Adidas and Nike, saying “It’s probably Nike and Adidas complaining about not getting their Big Baller Brand merchandise”. He also proceeded to state that the Better Business Bureau is “as outdated as Yellow Pages”. These ridiculous comments show the thoughtless behavior of LaVar and the horrible image that he is portraying of his family in the media.

After the infamous ZO2 basketball shoes launched, there was backlash on the huge $495 price tag, an LaVar tweeted “If you can’t afford the ZO2’s, you’re not a big baller!” However, this expensive price is only to get attention as LaVar’s marketing ploy was “It’s two things, stitching and glue.” This outrageous price for the ZO2’s screams a want for attention for LaVar, and a childish need to be in the spotlight.

The fate of Lonzo’s playing time leans on LaVar’s ability to behave. Lonzo has not been selected for the NBA All-Star Game, which was decided by fan, player and media voting. So far, LaVar Ball has managed to anger head coach Luke Walton of the Los Angeles Lakers and in doing so has jeopardized the possible playing time of Lonzo. Ball is undoubtedly ruining the face of family support in sports, as well as the sport of basketball itself. It is almost impossible to ignore the idiotic and comedic claims and horrible publicity focused around Ball and his brand.

Students at ASL are taught to have respect, responsibility, kindness, integrity and the courage to act. LaVar doesn’t act with respect towards his peers and he is not responsible. His actions not only reflect negatively on himself and his family, but on the sport of basketball itself and the fans of the sport. The lack of kindness towards coaches, players and others that impact LaVar’s life portrays a horrible image of LaVar and makes him seem completely unprofessional.

He is a poor reflection on the perception Americans abroad, and parents in sports. LaVar doesn’t understand the appalling image that he bestows upon himself and the damaging impression he leaves by hogging the press. Instead of monopolizing the media for fame through his senseless comments, LaVar should use his platform to make a positive image for himself and act as more of an ambassador for basketball abroad.