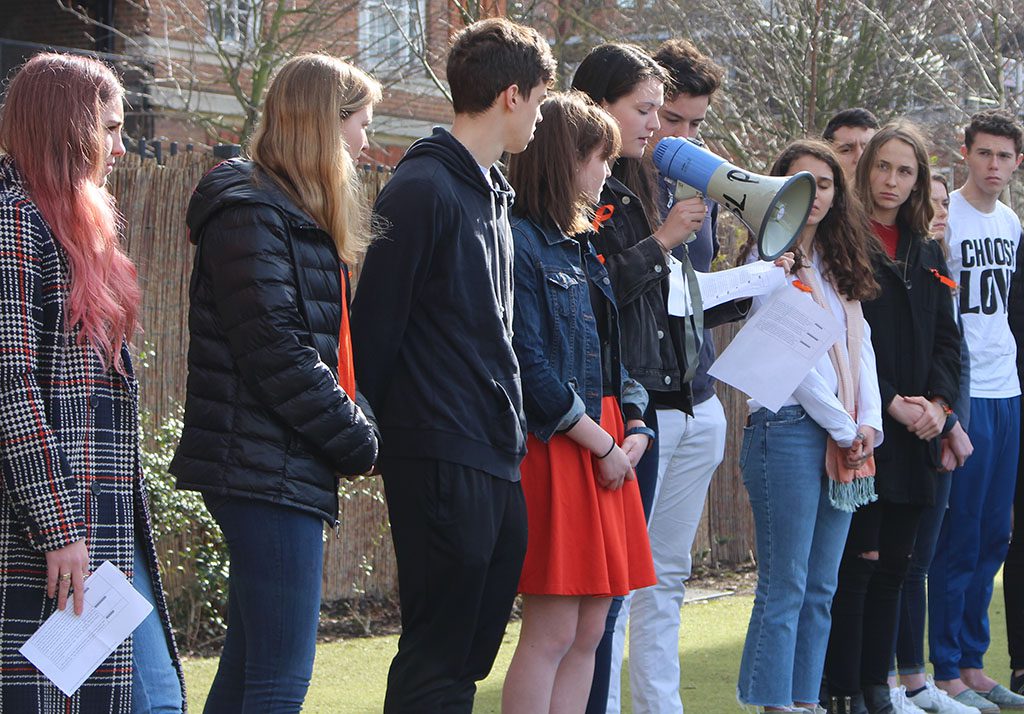 Students and faculty walked out of their classes onto Waverley Park from 10 a.m. until 10:17 a.m. today to commemorate the 17 lives lost at Marjory Stoneman Douglas High School in Parkland, FL on February 14, whilst also advocating for gun reform in the United States.

Students at ASL were not alone. Across the U.S. thousands of schools participated in similar protests. Those walkouts, along with the one at ASL, were featured across media outlets such as ABC News, Vox and CNN.

The walkout receiving global coverage signifies a success for Social Justice Council (SJC) member Cameron Lynch (’19). “Our purpose was to make news, make our name known and I think we’ve accomplished that,” she said. “I’m really proud of all the students who came and supported and were respectful of the cause.”

After speaking with Principal Jack Phillips, Director of Student Life James Perry and Head of Security Roi Yeffet, the SJC led and organized the walkout.

Phillips sent an email to the high school community explaining that the school has not taken a position regarding the reasoning behind the protest, but it has helped ensure the safety of the student-led event. He also wrote, “as always, we uphold our students’ right to a voice and an opinion, and commend their courage to act, their desire to effect change, and their efforts to make schools throughout the world safe places to learn.”

During the protest, SJC Co-Presidents Ananya Prakash (’19) and Amanda Welch (’18) explained the rationale behind the protest before introducing 17 students who spoke on behalf of the 17 victims. The speakers shared a biography about each person murdered at Stoneman Douglas.

Amy Raiole (’19) chose to participate in the walkout to honor the Parkland victims. “I was less focused on the political aspect and more on honoring the students’ lives that were lost,” she said.

Raiole felt that the speakers handled the subject well. “I felt it was really personal because my friend was actually one of the speakers and I thought it was incredible because she was very similar to the person who was killed,” she said.

Following three minutes of silence, members of SJC, including Maddie Kolaja (’18) and Welch, delivered speeches, which included a call to action and the letter that would be sent to Congress on behalf of those who participated today. “We stand here today across the Atlantic Ocean in London, England demanding gun reform. We demand that you pass legislation banning assault weapons, require universal background checks before gun sales and that you pass gun violence restraining laws that would allow courts to disarm people who display warning signs of violent behavior,” Kolaja said in her speech. “We are taking our safety in our hands because you, the adults in our government, are failing to do so.”

Lynch believes the event at ASL can enact change in the U.S., regardless of transpiring in a different country as the distance highlights the scope of the issue. “The purpose was to have change and not just sit back and watch people being killed in schools,” she said.

English Teacher Eve Berinati participated in the walkout to support student activism and express her thoughts on gun control. “First and foremost I participated because we could. We had a freedom and I think it’s important to exercise our rights. I walked out in honor of the lives that were lost not just in this shooting, but in them all, which were nearly 100% preventable,” Berinati said.

The prevention of school shootings resonates with Assistant Principal Karen Bonthrone, whose first year as a teacher coincided with the 1996 shooting at Dunblane Primary School in Scotland, where 16 children and one teacher died. “I went to school the day after it happened and… to see the fear on those students… was a memory I will never lose,” Bonthrone said. “As you know in this country, after Dunblane, they made the gun laws much tighter and, thankfully, we’ve never had a school shooting since then.”

As a teacher, Berinati appreciates the safety afforded as a result of gun reform in the U.K.  “I feel very safe walking into this building, which is the polar opposite of how I felt teaching at an American public school,” Berinati said.

Not all students participated in the walkout. Ludovico Barattieri di San Pietro (‘20), who is Italian, chose not to participate because he felt a limited connection to the political cause. “I do not really know anything about American gun laws. Walking out for me would… not [be] for gun control because I feel that I do not know enough about that and it does not really affect me,” he said.

Despite not joining the demonstration, Barattieri di San Pietro recognizes the reasoning for the walkout, however, feels more should be done for the global tragedies that occur daily. “I understand why people walked out in the school because it affects them directly because it is their own country. If that happened in Italy or London I would do the same thing,” he said. “I understand why the walkout happened, but it did not affect me and we should respect people who die all around the globe equally.”

For Science Teacher Jude Ruff, the walkout left a lasting impact. “In my 25 plus years here I have never had the opportunity to take part in something so moving, and so clearly aimed at making a change for a better world together,” Ruff said. “I’m proud to be part of a school where students take initiative like they did today.”