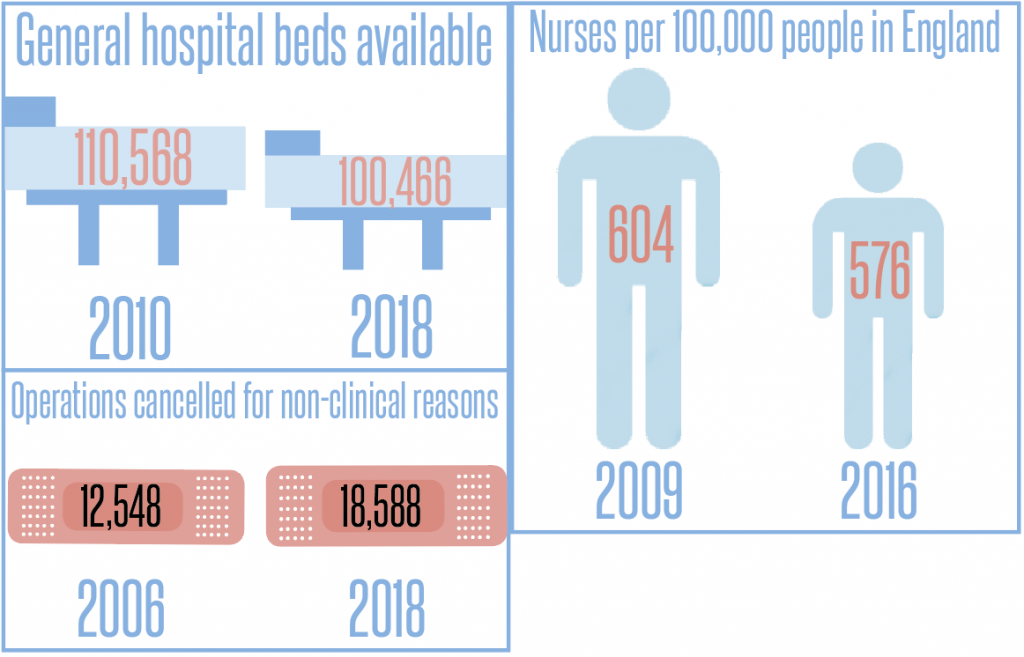 Despite the National Health Service’s benefits, the program has recently come under criticism for a lack of funding and shortage of staff and resources.

The National Health Service (NHS) was founded in 1948 as a source of free medical treatment accessible to every U.K. resident. The NHS ensures the wellbeing of the public, plays a role in the training of doctors and nurse and, according to the Office for National Statistics, it is also the single largest employer in the U.K. However, there has been a drastic shortage of staff, namely doctors, midwives and nurses according to The Guardian. In addition, experts point out that healthcare funding simply isn’t meeting targets. The English population are desperate to improve the current situation, with The Independent reporting that people are willing to raise taxes to fund the universal health system.

Indeed, accident and emergency (A&E) waiting hours are at their worst levels on record as Health Secretary JeremyHunt admitted that it had been the hardest winter for the health services. Marie Ogino (’20) relies on the NHS for annual check-ups and has noticed the ongoing crisis particularly when compared to private hospitals. “I know that there aren’t enough staff members…and a shortage of vaccines,” she said. In fact, The Guardian reported that there is a shortage of vital flu vaccines in parts of the U.K.

Although John Nation (’19) doesn’t use the NHS often, he is aware of the situation. “I have heard that some hospitals not being in proper operating condition to serve patients…especially during the winter,” he said.

Social Studies Teacher Duncan Pringle believes that there is a gross oversimplification of the NHS crisis due to rampant politicization. “The health service has been politicized from left to right and from one government to an- other government,” Pringle said. The Labour Party’s plan for the NHS had been to invest more money into the service to help it recover from cuts pursued by the government. Despite agreeing that the NHS needs a drastic in- crease in funds, Pringle feels that there needs to be more specific re- forms regarding how the money is being spent.

Former NHS employee and nurse Adam Bonnington said he is concerned about the investment in part-time jobs rather than full-time ones as The Telegraph reported in May that the NHS spends £3.7 billion on part time workers. “That obviously feels like a waste of funds, rather they could invest in a permanent nurse who wants to stay and work and take pride in their role,” Bonnington said.

Additionally, Pringle believes the same oversimplifications on the right of U.K. politics. The U.K. Independence Party had stated many times that immigrants have put excessive pressure on the NHS restricting local access. “It’s incredibly simplistic to state that the NHS is straining under the weight of immigrants and therefore, the local population cannot access it,” Pringle said.

However, a 2013 study by University College London stated that immigrants arriving in the U.K. since 2000 contribute 34 percent more to public services, such as the NHS, than they take out. In addition, according to a 2016 Full Fact report, the money that immigrants cost the NHS is insignificant to the costs of new medical technologies. Pringle believes that a reason for these oversimplifications could be people’s emotional attachment to the NHS. Free general healthcare is desirable so it is a sensitive political topic that no one can talk about without applying simplistic labels.

Bonnington also believes the lack of compensation of doctors and nurses could be the source of dissatisfaction among NHS employees. “From my experience of working in the NHS I feel that the pressure that nurses and doctors work under isn’t really reflected in the rewards they get financially,” he said.

Pringle and Bonnington also agree that the NHS crisis is much more complex than what politicians make it out to be. “We have to depoliticize the NHS and have a national conversation on healthcare,” Pringle said.

Statistics from Unison.org and The Independent