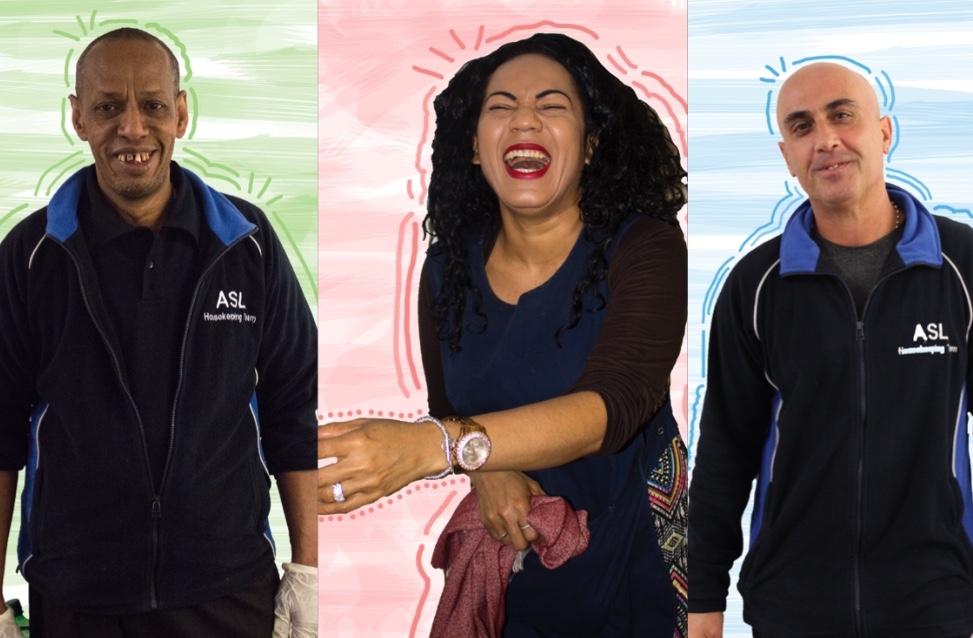 Inspired by journalist Brady Dennis’ 300 word stories, The Standard sought to capture the stories of those who often go unnoticed: the members of the maintenance staff.

Maritza Sanchez wants nothing more out of life than to see her three children well-educated, successful and happy. Motivated by this desire, about 10 years ago Maritza moved to London from Cali, her native city in Colombia, where she had lived her whole life.

Reminiscing on her sweetest memories from Colombia, she recalled relishing her mother’s homemade food: the spices, the flavors, the colors. “I remember how Mami was cooking.” She quickly corrected “Mami” to “my mother,” snapping back to reality, the far-away look in her eyes vanishing.

Maritza spoke slowly, carefully selecting the words that would do her mother’s character justice. “My mom, she is an example for all of us, my sisters and my brothers. Everything was really difficult in her time, but she always tried to fight for us, to find everything we needed.”

She was simultaneously and unknowingly describing herself: Maritza quit her job as a teacher, a job that made her happy, and moved to a foreign country, all to give her children an opportunity to learn English. To learn with freedom.

Maritza, the youngest of five siblings, took a leap and left home, breaking her family’s hearts and straying from generations of tradition.

With a smile so contagious my cheeks began to ache, Maritza spoke of her children. “My daughter Michelle, she is 24 now, she is studying medicine, she is going to be a doctor in the future. I’ve got Diego, he’s 16 and I’ve got Junior, he’s 11,” Maritza said.

Ensuring that her children retain their Colombian cultural identity has been a struggle for Maritza and her husband over the past near-decade. “Once we came to this country, [our children] are running faster, everything they do, they want to do it very fast. We say, ‘hey, calm down, take it easy,’.” As her children became increasingly engulfed in the pace of life in metropolitan London, Maritza reminds them to not let moments in life breeze past them unaware, and to keep their Colombian roots in mind.

Colombian culture is central to Maritza’s life. “I am a Latin American woman, you know Latin American people love music and dancing.” She giggled, gleefully, as she tells me about how she and her husband dance around her house together, without a care in the world. “My children say, ‘Mami, papi what is that? Stop it,’ and we say ‘Come here, come, come, lets move, let’s dance,’.” A day in her home is filled with movement, whether it is the merengue, salsa or bachata.

She returns to what reminds her of home: cooking. “Even though it is different what you cook, we use all the same ingredients as England.”

She was talking about home cooking in Colombia when she said this, but I couldn’t help but notice the connection. Maritza’s life in England is different to her life in Colombia, but the same family values, motivation for success, spirit for giving, and fun-loving nature remain close to her heart, no matter where she’s living.

There is something resembling fondness in the tilt of Abdul Yusef’s smile as he remembers his childhood in Somalia. The loud cafés filled to the brim with people standing outside in the sun. School children sprinting down the streets kicking footballs.

It is the relationships in Somalia that Abdul doesn’t think he can ever forget. “Our life is mostly in the home and street. Always we are in the cafés, we just talking, playing some games,” he said. “We love people, always helping people, very good with the guests, very, very good.”

With a little laugh, he tells me that Somalians love to stand, and that if they have the option to sit, they will still stand. Abdul tells it as a joke, but the look in his eyes make it clear that this is about something bigger; something part of his identity, part of his home. “If you see any two [people] standing up outside, 70 percent they are Somalians. That’s our environment, the chairs are always empty.”

He runs his finger through his hair, suddenly looking more tired, as he goes on to talk about life in London. “When you come to the West, it’s a different environment. Everyone by themselves. Life is just keep going, keep going, working. There is no closeness in things.”

But Abdul is not one to let himself be anything less than happy. He explains he still manages to find home and comfort in this city where everything is a little too distant. “The good thing about London, that there is a lot of my community, a lot of different communities. I learn a lot from that,” he said. “You feel little bit like you are home because we have our shops, we have our cafés, we have our restaurants.”

Abdul’s wide smile never drops as he describes the new people he has met in his 21 years in London. Even with a hectic life, Abdul knows he must take time to stop and just be. “You need that little bit gap to just be yourself. People must talk, must communicate, must learn from each other, must be friendly,” he says, gesturing to the space between us. “We lose nothing, we just increase our positivity in life, our energy and it’s good.”

Abdul is full of something light and content. It radiates through his words and his warm eyes that lose focus as he talks about the past. Clasping his hands tightly on the table, he leans forward as though telling a secret and says, “People are wealth. Some people think wealth is money, but people are really the wealth.”

For over two decades, Paulo Vagos was a fisherman in Peniche, Portugal, a peninsula on the west coast of the country. His life was the sea. He would go away on excursions out to the deep sea, for one to two months and never see land during the journey.

Fishing in the summer is pleasant, he shared. “The sea, the water is like that,” he said as his hand traced the calm ripples etched in his mind. Fishing in the winter is “very dangerous” he stressed. For a minute, his smile began to falter. “I feel very afraid, it’s very cold. Sometimes I can’t work, my hands can’t move, it’s impossible.”

He shivered as he spoke, like he could feel the ocean’s winds whipping through the English pod. “Then the water comes, sometimes 10 meters or more,” he said.

Being a fisherman for 20 years entails being a fisherman through 20 winters. He paints a vivid picture of the sea as he speaks. I envisioned a monstrous wave suspended above a little boat full of fishermen. One of them is Paulo.

Paulo explained how hours, even a day could pass with no fish in sight. “Sometimes we have to go to different cities for some fish. Sometimes, we find nothing, it’s bad.” Fishermen are only paid when they bring fish back.

Yet, Paulo loved to fish. “I like to see a lot of fish in the net.” These blissful moments of success gave him the satisfaction to remain afloat.

Whenever the fishing net tore, Paulo would go to the repair shop in town to get it mended. This is where his wife worked a summer job. “One or two times,” he said. It was only a matter of a few meetings. “Peniche is very small. Whether you see people on the beach or some other place, you’ve seen them.” Speaking of her with an unyielding grin, “we are good friends, a friend, a wife, it’s good.”

I asked about the rest of his family. “My son, sometimes, he thinks he’s like superman.” He recalled stories of his son’s childhood in Peniche. He starts laughing, the kind of laughing that makes you a little short of breath.

He recalls the time his son’s great-grandfather bought him a new bicycle. “He took the paint, and painted his bicycle.” He is clutching his side now, tears beginning to pool in his eyes.

Paulo loves Peniche. He talked about Peniche coming alive on the weekends. He talked about the colorful buildings, and the clear, blue water and the “best surfing in the entire world.” He pulled up pictures on his phone and his eyes flicked between me and the photo, relishing in our admiration. “It’s my city,” he said with a slight grin.