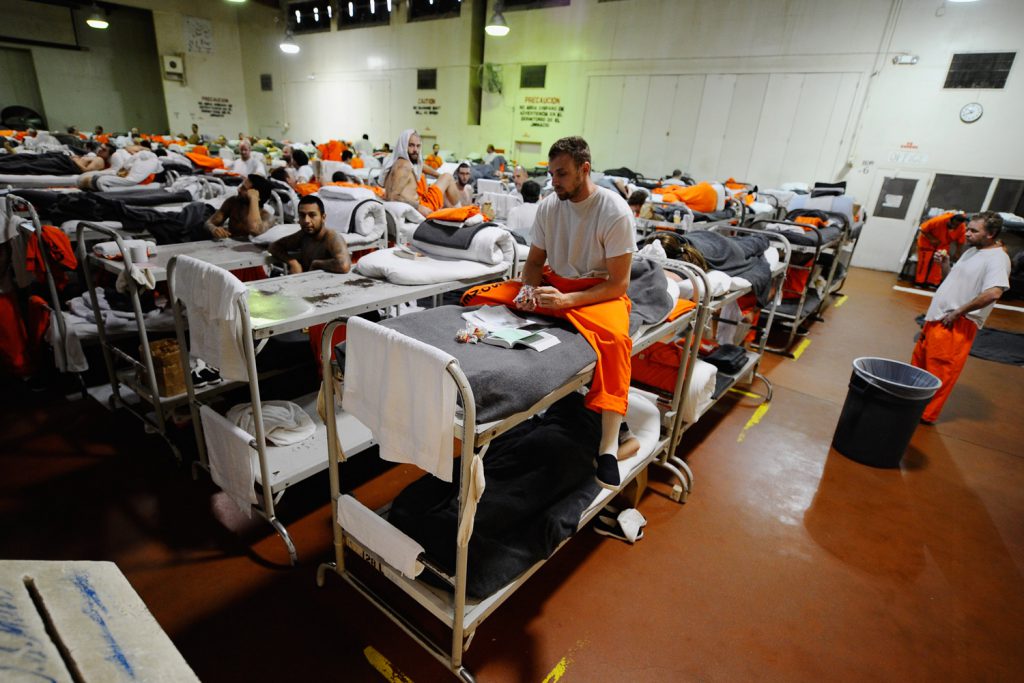 CHINO, CA - DECEMBER 10: Inmates at Chino State Prison, which houses 5500 inmates, crowd around double and triple bunk beds at a gymnasium that was modified to house 213 prisoners on December 10, 2010 in Chino, California. The U.S. Supreme Court is preparing to hear arguments to appeal a federal court's ruling last year that the California state prison system would have to release 40,000 prisoners to cope with overcrowding so severe that it violated their human rights. More than 144,000 inmates are currently incarcerated in prisons that were designed to hold about 80,000. (Photo by Kevork Djansezian/Getty Images)

An exploration into the bias of America’s judicial system and how it has led to prejudice against American minorities.

Stephon Clark was in his grandmother’s backyard when the police found him on March 18. They were searching for a suspect after receiving a call about car break-ins in Sacramento, California. Upon seeing Clark, a 22-year-old black man, the police shot him 20 times, taking his life, on the grounds that he was holding a gun. However, the only item he was holding was his phone. Criminal justice activist Danielle Phillips believes that the criminal justice system in America is a major issue for civilians. “The [2.2 million] people that we’ve incarcerated, that we’ve put into state prisons and into federal prisons, and the [reasons] that we put them in there is basically this massive human rights abuse issue,” she said.

Phillips grew up in Madera, California, in what she calls a “prison town.” She didn’t realize that it was abnormal for an 8-year-old to tour a women’s detention facility until she started reading about the justice system in the U.S. Seeing crowds of people in prison confused Phillips; at a young age she couldn’t comprehend the reason behind their imprisonment.

Phillips further explained the deep rooted problems that the U.S. criminal justice system brings to light, such as the biases at every level of prosecution and control. “I think that we desperately want to believe that it’s a fair and just system. We all want to believe the good guys are good and the bad guys go to prison,” she said. “The reality of that is that we as a society have decided that certain types of people should be policed.” Another statistic Phillips included in her presentation is that one in every three black males born today in the U.S. can expect to go to prison at some point in his life whereas one in every six Latino males, and only one in every 17 white males can expect the same thing.

In studying racial bias and wrongful execution in Human Rights Seminar, Anya Syed (’19) came to similar conclusions as Phillips.“There is this concept called ‘cognitive associations’ [where] people make associations based on the color of someone’s skin. So, for example, if a black man walks into court he’s more likely to be wrongfully executed and wrongfully convicted for this reason,” Syed said.

In Phillips’ Aequitas Day presentation with her husband, Principal Jack Phillips, she included some statistics to help people understand the severity of the issue. One statistic showed that more African-American men are in prison, jail, probation or on parole than were enslaved in 1850, before the Civil War began. According to The Washington Post there are currently 1.7 million African-American males under some form of correctional control, whereas there were 870,000 African American males enslaved in 1850.

For Social Studies Teacher Todd Rooks racial bias is increased in his everyday life. One day around Christmas about 12 years ago, Rooks, his mother and his brother were driving in the Best Buy parking lot in Newport News, Virginia when the police suddenly them. “[The police] stopped us because they said that they had reports that this car was stolen or this type of car had been stolen, which is just any excuse they give any black person whenever they want to stop them and suspect something is wrong,” he said.

Simularly to Syed, Rooks believes that everyone develops preconceived ideas about people based on their appearance. “We stereotype things because it’s our nature, and race just happens to be the biggest thing that you can see other than gender. We have such a stereotyped view that black is bad, evil and negative,” he said. “Whether you’re Black, White, Asian [or] Hispanic, Black gets attributed with bad… and so it changes your reactions and the way you approach things.”

Rooks was reminded of this racial divide when recently he and some friends stopped to ask three young adults how to enter a club on a night out. Two of the boys were black and one was white. The white boy joked that they needed to break the glass and walk through the door. The two black boys politely said that they didn’t know. Rooks believes that the black boys thought they needed be respectful because they were representing black people whereas the white boy was less concerned with this.

Due to the media, cases of police brutality have been brought to the world’s attention. “Over time [the racial profiling issue has] gotten a lot more prevalent in society especially over the past 50 years. People are starting to realize that people of color are being marginalized against and are always prejudiced against,” Syed said. “Lack of police training, lack of accountability, all of that culminates with this racial bias in the judicial system.”

Phillips explained that the crimes racial minorities are often conflicted for are common, undisputed actions for those in the racial majority. She believes many of the crimes that minorities are serving long term sentences for happen on college campuses every day. “I can walk to the store right in the middle of the night with a hoodie on and get skittles and no one is going to run me down,” she said. “We don’t realize that we’re not criminalized for it because of where we live, because of the color of our skin.’”

Despite the fact that this issue isn’t directly affecting everybody in the ASL community, Phillips believes it’s still an issue that this community should pay attention to and care about. “The Civil Rights Movement didn’t actually affect a lot of [white] people. Those lunch sit ins and those people drinking from separate water fountains, there was a big part of the country that it didn’t affect at all,” Phillips said.

Syed believes unjust incarceration rates will be an incredibly difficult issue to fix. “I think the only thing we can do is wait for people to become less biased and more impartial in general, and I think the only way to do that is to create a new foundation for the judicial system instead of one that’s built on racism,” she said.