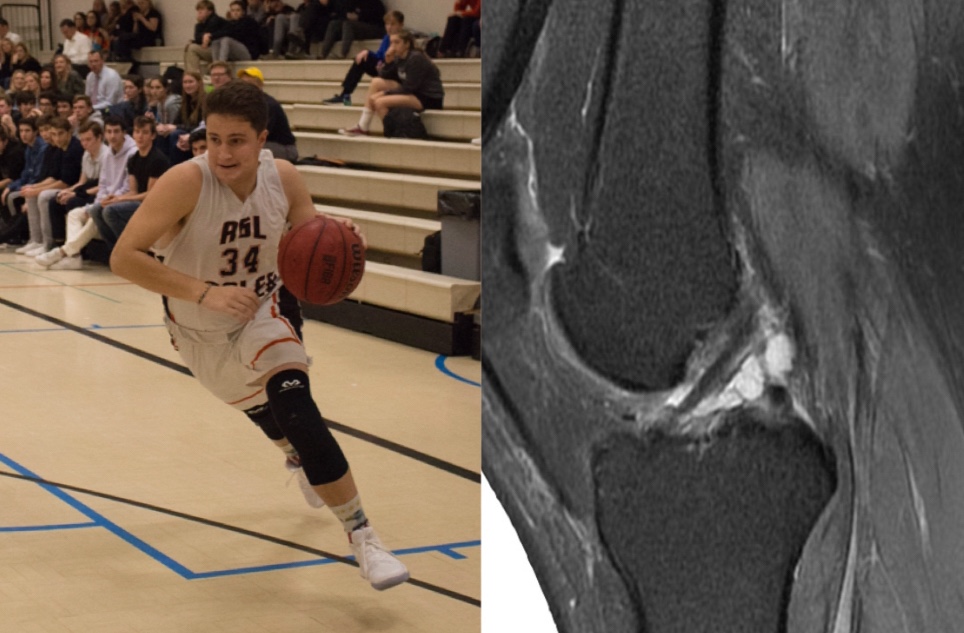 Three athletes with torn Anterior Cruciate Ligaments (ACL) discuss their injuries and how it’s affected life inside and outside of sports.

Running down the center of the rugby  pitch Russell Cornelius (’20) was tackled by an opposition player, as he does tens of times each match. However, this tackle was different, as he lay on the ground trembling in pain, he knew something was seriously wrong.

Cornelius, who earned his first varsity rugby appearance in Grade 8, suffered a torn Anterior Cruciate Ligament (ACL), along with a torn meniscus in his right knee on September 17. Cornelius is one of several student athletes this year who have torn their ACL and consequently have had to miss parts or all of their athletic season.

Unlike most ACL injuries, Cornelius wasn’t initially diagnosed with an ACL tear when he visited the doctor following the injury. Instead, he was diagnosed with a crack on his right femoral condyle, a bone in the same vicinity of the ACL. He originally received an estimated recovery time of four weeks.

After two months Cornelius was examined by his uncle, who is a knee surgeon, and was then diagnosed with a torn ACL.

Jake Perelmuter (’18) also tore his ACL this year and similarly wasn’t initially diagnosed with the injury. In the quarter-finals of the varsity boys basketball ISSTs against ACS Cobham, Perelmuter went up for a lay up and landed awkwardly on his knee. Initially after the injury, the athletic trainer at the tournament told Perelmuter that it was simply a hyperextension and Perelmuter “thought there was a chance that [he] was going to play the next day.”

However, the pain was too severe and he received a MRI scan after the tournament and was told he had completely torn his ACL.

Perelmuter will now have a 9- to 12-month recovery time, missing the spring baseball season. “It’s hard to miss the season. That’s the worst part about this, [missing] my senior year baseball season. Especially with this team and having so many people back from last year, with so many friends, and trying to go for a third straight ISST, that’s been really hard,” he said.

Cornelius proceeded to get surgery, but the whole recovery process has taken its toll on him both physically and emotionally. “I’ve never felt more atrocious in my whole entire life than having to [live life] and feel like I didn’t have a purpose because I didn’t have rugby,” he said.

Cornelius had a similar reaction to Perelmuter after hearing the news that he would miss the season, especially since it was his brother, Ryleigh Cornelius’s (’18), final year on the team. “It was honestly the worst feeling of my whole entire life, I’ve never felt more sad than missing playing senior year rugby with my brother,” Cornelius said. “It’s kind of been my dream since my dad told me about his times playing rugby in high school[at ASL].”

When Cornelius tore his ACL and he knew something was wrong immediately. However, Can Suyur’s (’20) injury was more of surprise. He injured his ACL in a JJV basketball game for ASL and Athletic Trainer Jenny Newell originally didn’t think of it as an ACL injury when it happened. “It wasn’t the typical mechanism of injury and his responses and testing was a little funny,” Newell said. Suyur, similarly to Perelmuter, has a 10 to 12 month recovery ahead of him.

Cornelius, on the other hand, only has a six month recovery due to the different type of surgery he received. Perelmuter and Suyur received a hamstring tendon autograft, a surgery that uses a tendon from a hamstring to replace the torn ones in the ACL. Cornelius, however, still had strands of his ACL left and was able to use the ACL of a donor who had recently died.

Although the surgery can be daunting due to the length and complexity, Cornelius wasn’t worried going in, but struggled more with his physical setback directly afterwards. “I’ve never not been able to walk, I’ve broken ankles and had other small injuries but I’ve always been able to get through it,” he said. “However, this time, I physically was unable to walk which was a new experience for me.”

Suyur, who plays volleyball and basketball for ASL, has also noticed how the recovery from surgery can be really difficult and disabling. “Being on crutches, I can relate to people who recently broke their legs or even lost their legs. It’s really a bad feeling, you rely on others because you can’t do anything by yourself,” he said.

Although the surgery was rather serious for Cornelius, he is not concerned with his ability to play sports again. “I was confident that my doctors would do their job and get me back on the pitch,” he said. “However, there were points where it seemed like a recovery was really far away.”

Newell believes that part of what makes the ACL so daunting is the reputation of the injury. “ACL injuries are different because of the stigma. Everyone knows about an ACL tear.  It takes a minimum of four months [to recover] and four months isn’t really realistic to come back to full contact play,’ she said. “A full recovery normally takes around six to nine months to get to a point where you don’t have to worry about your injury.”

Moving forward, Cornelius, Perelmuter and Suyur all plan to get healthy again as soon as possible, mainly for their love of sports. “Sports are my favorite thing. They [are] a release for me, it’s how I socialize… I just really want to get back playing sports again,” Perelmuter said.