Equalizing the playing field of grades 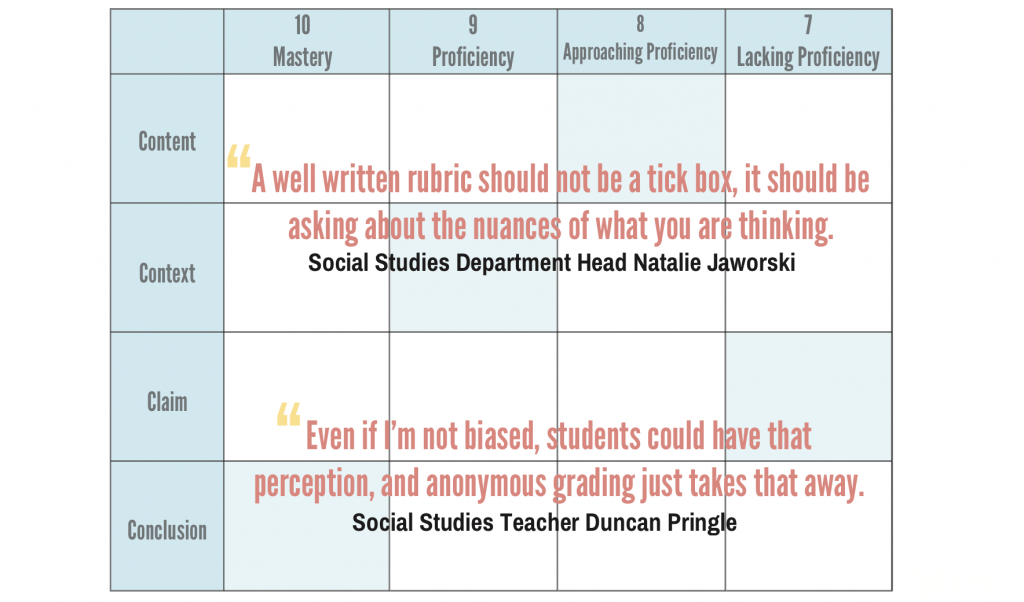 Providing clarity about expectations and preventing bias are the first steps to a fair grading process. Teachers and students shed light on how they maintain trust within the classroom.

In any classroom, having trust and a level of clarity between the teacher and students is essential to a fair grading process. Disagreements are inevitable, but limiting confusion and feelings of inequality are possible through a variety of strategies.

Social Studies Teacher Duncan Pringle began using anonymous grading, a process where the student’s name is replaced with a number or pseudonym, to avoid misconceptions of bias. “Even if I’m not biased, students could have that perception, and [anonymous grading] just takes that away,” he said.

Maggie Brosnan (’19) believes that when students sense that there might be a presence of a bias it makes them “feel that they can’t be held accountable for their work.” She believes that anonymous grading is effective as it eliminates the potential for bias, and the feeling of resentment and distrust within the High School.

When Grade 7 English Teacher Tracy Steege was a social studies teacher two years ago, she frequently employed anonymous grading. Steege began to use anonymous grading when ASL switched to standards-based, rubric-based grading, where students are expected to meet certain standards, and their grade is based on whether or not those standards are met.

Most students are familiar with these standards and their appearance on rubrics, but rarely take the time to think about the effect they have on ensuring a fair process. Head of the Social Studies Department Head Natalie Jaworski is an avid supporter of these rubrics, saying that “[they] actually equalize the playing field” and that with common grading standards, students understand what it means to achieve an “A” or a “D.”

When formulating a rubric for a summative assessment, the Social Studies Department uses a process called norming, where the teachers of a class will grade an essay anonymously, “then compare how each other scored it.” Finally, teachers sit and debate the fairest standards to hold the students to. Jaworski believes that it is important teachers understand exactly what they are marking for when grading papers, and thinks that rubrics and norming helps achieve this.

However, Jaworski acknowledges that there are some problems with rubrics. “Some students look at rubrics as a tick box, they have to do these things to get an A. A well written rubric should not be a tick box though, it should be asking about the nuance of what you are doing and how you are thinking. So, it’s not ‘I used three examples therefore I get an A’ it’s ‘how well did you use those examples’… I don’t want assignments to be tick box activities, I want you to use your brain,” she said.

Echoing Jaworski, English Teacher Miles Dunmore believes that instead of being seen as specific levels of success, rubrics should serve as a starting point for discussion between students and their teachers. “There is a good place for rubrics tailored to specific assignments, however, the rubric must be in the service of open, crafted, thoughtful conversation between the teacher and the student,” he said.

Dunmore wishes to foster creativity and believes that rubrics can make students fearful of thinking outside the box.

Similarly, Steege had to adapt to relying on rubrics when she switched to teaching English as she was no longer able to grade anonymously being able to tell who the author of the work was based on their individualized style of writing.

Looking to follow the development of her students’ skills, English Teacher Kim Zeineddine believes that rubrics are more effective than anonymous grading as anonymity does not allow her to see how her students’ work is improving and what her students are finding challenging. “You should be thinking about your students progress,” she said.

However, Brosnan feels as though anonymous grading should be used in every class to maintain confidence in the grading system. “Even if people don’t think that teachers at ASL are grading with a bias, I think that all classes should have that anonymous grading system because it forces everybody to feel that it’s their work that’s being graded and not them as a person,” she said.