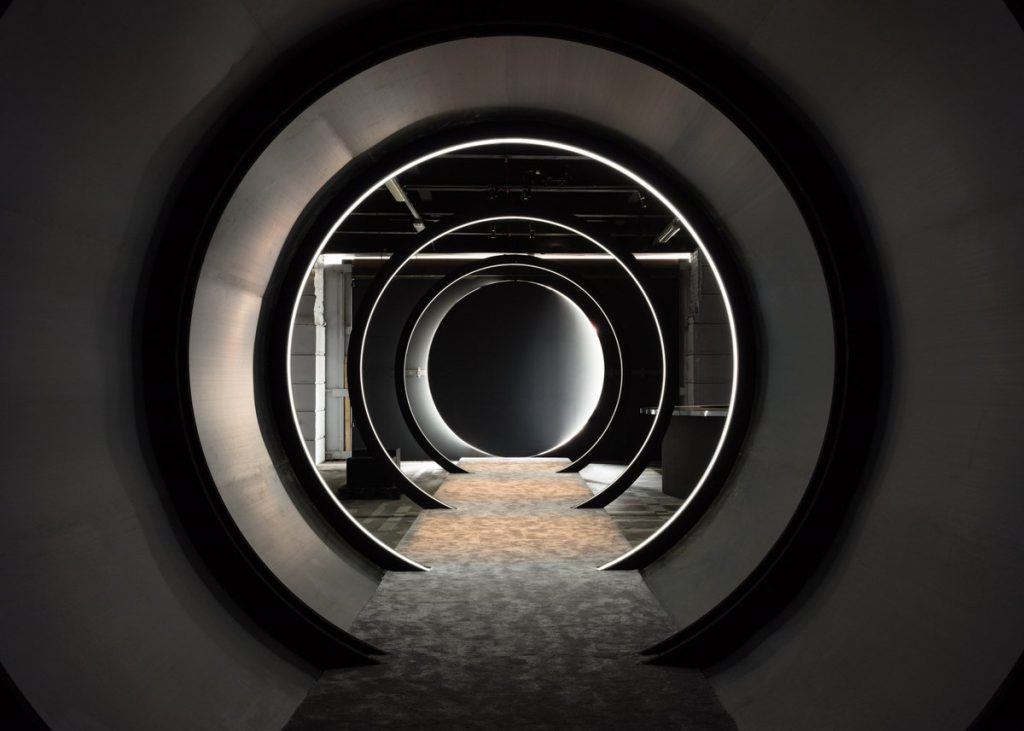 The entrance to "The Flipside"

Recently I strayed from my typical lunch plans and attended an exhibition that resided in the Old Selfridges Hotel. Accompanying Selfridges’ “Radical Luxury” project, “The Flipside” exhibition focused on the question of “what is luxury?” and seven brands, including Selfridges, had the ability to create a visually captivating, multi-sensory installation to showcase their visions.

??
The exhibition concluded on May 20, but it was a timeless experience. Even though the exhibition is over, Selfridges has created a video showcasing “Radical Luxury.” After watching the video, I had expected the exhibition to be similar, but the ideas turned out to be quite contrasting to the video, which challenged my thinking more.

The first instalment, by Selfridges, was meant to challenge the viewer visually through a series of mirrors and light patterns. The windows were covered in metal sheets with circular holes for light to filter through. This instalment was a great precursor for what was to come further on in the exhibition because it was simple, and gave viewers an understanding of the exhibition as a whole.

The second installation was a series of illuminated glass prisms, filled with electronics from the past, such as camcorders, record players and retro microwaves. This one was done by Loewe, a designer who I had not previously heard of before the exhibition. Another addition to some of the prisms were different colored poles which reside in some of their stores around the world, including their Selfridges location. They were a nod to the brand’s history. The perimeter of the installation was a curved black wall, distorting the viewer’s perspective of the space and challenging their vision, creating an all-around visual experience. I thought that the installation felt nostalgic, as I do remember a few of the electronics from when I was young, and really showed this idea in an aesthetically pleasing way.

In the following room, entitled The Libationary, the elements of smell, taste and touch were widely used. As I was led into a room by the tour guide, I was instructed to touch and smell various things on a table. The objects, such as twigs, cloves and oranges were correlated to a specific tastes and feelings. For the duration of my time in the room, I was given a sheet of paper to record my favorite flavors, and when I emerged from it, I was given a thin piece of rice paper that was soaked in a cocktail mixture of lemon and strawberries. I really liked how this installation linked all five of the senses. This section of the exhibition was sponsored by world-renowned bartender and restaurateur Ryan Chetiyawardana, also known as Mr Lyan. The personalized cocktails emphasized Mr Lyan’s idea of luxury being based on individuality. I was able to experience and receive something that was directly correlated to the objects I had recorded on the paper, something which had never happened to me before in an art installation, and was subsequently one of my favorite parts.

The next installation, by designer Thom Browne, challenged today’s perception of beauty. As the lights flickered and faded through a one-way glass box, my reflection became more and more distorted. While the lights illuminated the contents of the box, two caricature mannequins stood in the center, adorned in puffy white dresses. Because of the way everything was set up, they could only be seen whenever the viewer could not see their own reflection. This piece brought out how people’s perception of themselves is always more distorted than reality.

Another piece I really enjoyed was the Byredo water wall. The fragrance company showcased their idea of luxury by collecting water from around the world and storing it in opaque jugs. The jugs were complete with the location and theoretical expiration dates of the water. Using the expiration dates, Byredo gave the impression that water can “expire” and foreshadowed the time before that part of the world runs out of water. This one surprised me the most, because water is something that we don’t really think about when thinking about the luxuries of our everyday lives. Perhaps Byredo was trying to emphasize just that.

Arguably the most famous designer of the exhibit, Louis Vuitton chose to showcase luxury in the form of mini sculptures on rotating posts. Each post consisted of a different living environment, ranging from space to the deep ocean, and intertwined one of their famous items within each one. Hanging from the ceiling was a moon with the LV logo projected on it. Their goal was to demonstrate that travel and experiencing various types of landscape are a luxury.

The final installation I found intriguing was the sundial piece by Selfridges. Every five minutes, the lights revolved around the centerpoint, and the shadow of whoever’s standing there chases itself around that point. Because there is always some form of light on the stage, it gives the impression that the sun never sets. Additionally, the circular stage provides a place for everyone who wishes for the ability to be “center stage” and feel the light shining on them. This presented the idea that not everyone can experience luxury, which made me understand the word more in depth.

This exhibition made me think about what luxury means to me, and gave me a new perspective on that idea. It was also a very different experience to what I’d hoped it would be. Although I was very impressed, I felt like it served more of a moral justice than an aesthetic one, due to the fact that many of the pieces felt like they were trying too hard make a statement, rather than being visually intricate. I was more inclined to think about my actions and senses rather than to take a photo of each piece, which says a lot for me, since I’m always trying to take photos of everything I see.

Each company brought a different perspective to the driving question, “what is luxury?” In doing so, they were able to reach out to each individual attendee. Overall, “The Flipside” was definitely an experience worth missing a lunch period for.