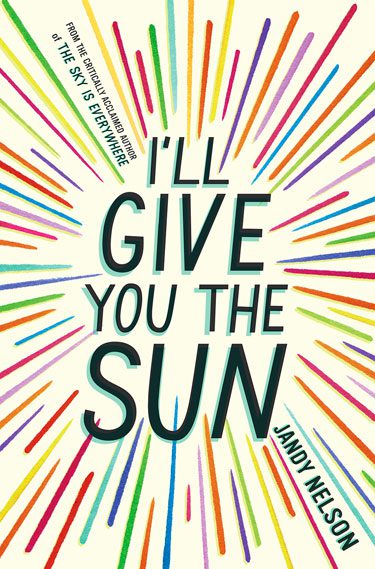 I’ll Give You the Sun by Jandy Nelson, the critically acclaimed author of The Sky is Everywhere, will give you more than just the sun. On top of warming you from the inside out, it will give you a whole new perspective on life and romance.

Jude and Noah are twins and best friends, two parts of one soul. Three years later, they’re further apart than ever, two halves of a soul bounding through space, ripped apart by a tragedy. I didn’t need to believe in ghosts to connect to the way Jude talks to her dead grandmother as she deals with being Noah’s “ex-twin.” Her pain seems to be unbearable until she meets a boy who’s a sensitive, cowardly, leather jacket wearing oxymoron. It is only then can she start piecing her story together.

I also didn’t need to be an artist to feel what Noah feels as he explains his life through drawings and intense emotions and as he falls in love with the boy next door. Their fierce longings and severe hardships guide Jude and Noah back to each other.

The earlier years of Jude and Noah’s lives are told through Noah’s perspective, and the later years told by Jude. Because of this, you never learn both sides of the story. They found themselves asking, who did their mom love more? Who was the most talented? What possessed them to hurt the other in their greatest times of need? Throughout this book, Noah and Jude explore these questions and many more, facing some of the hardest things life has to throw at them.

Somehow, Nelson puts love into words: passion filled, intense words that left me breathless. She paints love stories you can feel, but her book offers so much more than romance. She has put a new perspective on everything, one that can leave you staring off into space, contemplating how the world works. In Plato’s allegory of the cave, he describes a cave where people are chained down by their lack of will to learn and can be brought out of the cave to learn about different perspectives, if willing. Nelson brings all of her readers up out of the cave and into the light, as she explains how to remake the world.

This book is truly one you won’t be able to put down. It’s drenched with passion, warmth and relatability to everyone that believes in love, so much so that it becomes addictive in the best way. At the same time, it is something most people cannot relate to because finding your soulmate isn’t something that happens on a regular basis, which is what makes I’ll Give You the Sun one of the most unique books out there. It’s so good it’s almost impossible to put into the right words.