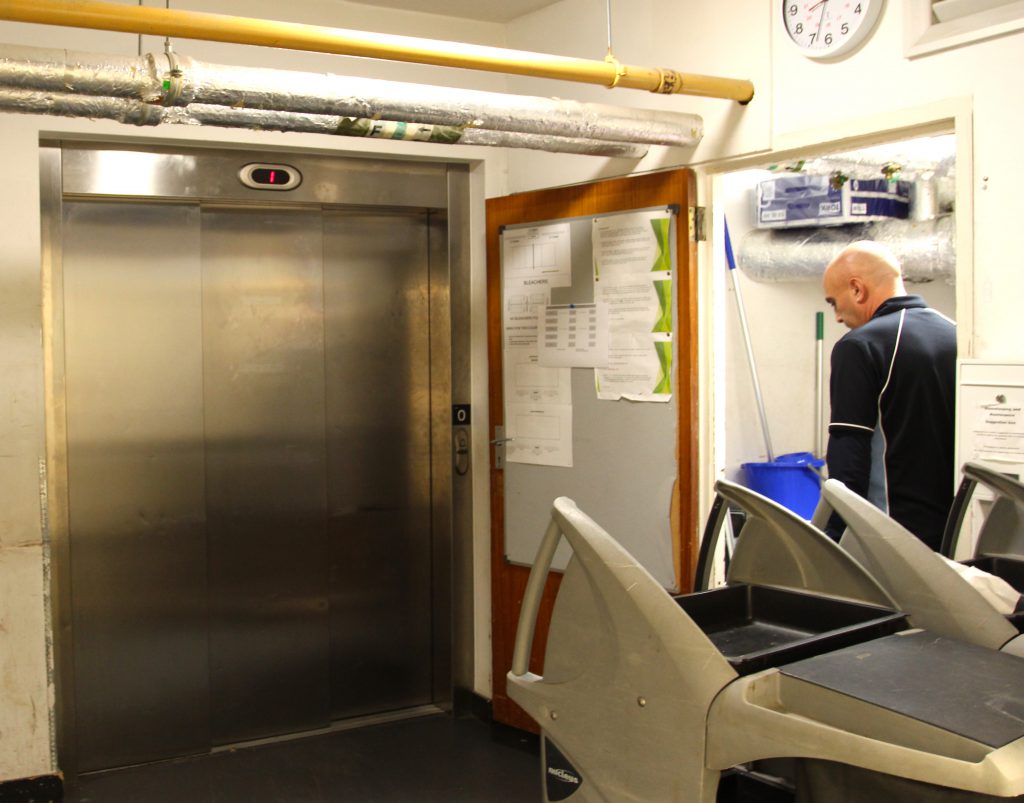 After a major part broke seven weeks ago, the school’s main elevator that is used for both passengers and moving goods such as food deliveries and trash between floors has been out of use. School supplies, such as reams of paper, have been harder to deliver to the different printers in the building, and food deliveries for the cafeteria and other items have been harder to obtain and transport.

In past years, when something in the elevator broke, the damage has been minor, and usually fixed within a matter of hours or days. Parts that are needed in order to fix the elevator in these circumstances are usually readily available.  “Some parts within lifts are interchangeable between different manufacturers,” Building Services and Maintenance Manager Dean Evans said. “The part that went this time you couldn’t use a different manufacturer… no U.K. stockist had it and no European stockists had it.” Evans said the part had to be made from scratch.

In cases when the elevator is out of use for an extended period while waiting for a repair, the school has ways to get extra help in carrying goods up and down the stairs. However, the one thing the school doesn’t have a fallback for is the passengers who need to use the elevator.

Some students, like Dylan O’Connor (’22) who is using crutches due to an injury, have had a longer journey to their classes with the absence of the elevator.

O’Connor said he’s also been late to school because of the longer route he faces up the stairs.

Even though the school can get extra help to carry goods and deliveries, taking care of them has still been a challenge. Items that many would rarely think about when going about their day, such as printing paper, haven’t been as readily available without the assistance of the elevator to make moving them around school easier. Various printers in the school were lacking paper due to the difficulty of carrying heavy supplies up the stairs.

Printing, Mailing, Good Inwards Controller Steve Hardy has been having difficulty due to the situation. Retrieving deliveries and loading printers with paper are both large parts of Hardy’s job, and without the elevator, his job has become much more strenuous. “Deliveries, taking paper around, it is a big part [of my job], and it does slow you down a bit,” Hardy said.

Aside from restoring printers and photocopiers with paper, Hardy also takes care of deliveries to the school. “It’s affecting us in all sorts of ways… deliveries have to be rerouted to the other side of the building, so they come in through Lower School,” he said.

He explained that due to the change of drop-off location for deliveries, which is usually near the elevator next to the Waverley Place entrance, drivers don’t always leave goods at the right place, which means that Hardy must retrieve them and take them to where they are needed without the assistance of an elevator. This journey can be physically unsafe for Hardy, especially if the delivery is heavy. “You can hurt yourself getting it up the steps,” Hardy said.

As of October 19, the elevator has been fixed. However, although the elevator is technically fixed and is accessible,n order to ensure it doesn’t break down again, goods that are too heavy aren’t allowed in the elevator. For example, large metal cages used to transport goods aren’t allowed on while small trolleys are.

Various plans have been made to make sure that such an incident with the elevator doesn’t happen again in the future. Director of Operations Jim Heynderickx said that in order to make sure that such a large break doesn’t occur again, large deliveries will be broken up into smaller trips on the elevator instead of one big trip, hence the current hesitance to allow bulky packages aboard.

Evans has a meeting scheduled in the coming week with the current service contractors to discuss which elevator parts are readily available, and which ones aren’t, in order to know which parts to hold on campus. “We would expect stuff would still break,” Evans said. “But we’ll be better prepared, knowing what’s available in the U.K., and what’s not available in the U.K.”