The Hate U Give: Defining What it Means to be a Black Teen in America 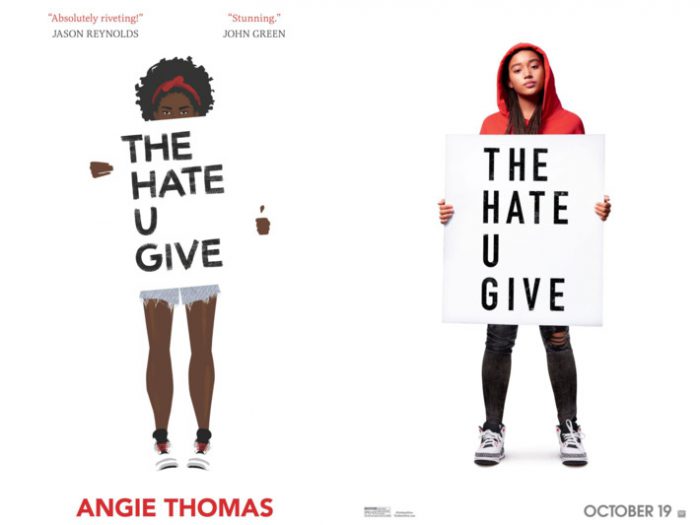 The Hate U Give (THUG) is the coming of age story of sixteen-year-old Starr Carter, (Amandla Stenberg) but is also about how injustice affects an individual and other communities. The film not only portrays the experience of being black in America, but also shines light on the differences between classes and races through a controversial police brutality case.

Originally an award-winning novel published by Angie Thomas in 2017, THUG was released in the UK on November 2nd and later directed by George Tillman Jr. Alongside Stenberg, there are many familiar faces in the film, such as KJ Apa, Sabrina Carpenter, Regina Hall, Russell Hornsby and Common: most of them well known for their involvement in other coming of age stories.

THUG begins with an introduction to Starr’s family, who live in the rough neighbourhood of Garden Heights, which is described as a ghetto and notorious for gang violence. The Carters can afford to send their three children to Williamson Prep, a predominantly white school away from the bad influences in Garden Heights. At Williamson, Starr is mindful of her language, behavior and mannerisms to avoid being stereotyped as an ‘angry black girl’ or ‘ghetto’ by her rich, white peers who have the privilege to act however they want. But when she returns to Garden Heights, Starr becomes a completely different person. She refrains from ‘talking white’ and struggles to fit in with Garden Height’s party culture.

On their way home from one of the Garden Heights parties, Starr and her childhood best friend Khalil (Algee Smith) are pulled over by a white police officer. Starr sits in the passenger seat with her hands on the dashboard. Khalil is outside with his hands up. He reaches through the car window to check on Starr and picks up a hairbrush at the same time. Officer 115 panics and assumes Khalil was picking up a weapon. 115 shouts. 115 shoots. Khalil collapses and dies on the road.

Both of Starr’s worlds are destroyed after she witnesses Khalil’s murder. Facing pressure from all over the community, Starr must choose between speaking up to get justice for Khalil or staying quiet.

While Garden Heights is in uproar over the murder of Khalil, the white students of Williamson Prep continue to be casually racist and ignorant towards the issues that minorities face. In fact, they use the phrase black lives matter as a way to trivialize the movement more often than the black characters do to uplift themselves, which I found interesting because it’s almost as if the white characters adopted the struggle of police brutality to make the issue about themselves.

In the book, Starr is depicted as a dark-skinned girl, so the casting of Stenberg, a biracial woman, has been seen as problematic among black women in particular. More often than not, Hollywood casts light-skinned women when a dark-skinned woman is recommended for a role, so the role of Starr would have been a perfect opportunity to include more color diversity in Hollywood. Although I agree with this point, I also believe that Stenberg’s celebrity status provided people with an incentive to buy tickets. To put it simply, Stenberg is a well-known actress, so her name sells.

As a response to the controversy, Thomas said she modelled Starr’s character after Stenberg. Despite not imagining the book as a movie, Thomas was inspired by Stenberg’s social activism, an important characteristic of Starr.

But after watching the movie, it’s clear Stenberg’s celebrity status and Thomas’ initial visions of her as Starr weren’t the only reasons she was cast. Stenberg’s powerful acting throughout the movie really conveyed the passion and emotion of her character, and proved she was worthy of the role. With this in mind, I feel as though the casting of Stenberg for the role of Starr was completely justified and the right decision.

Overall THUG was an amazing movie that kept me engaged the entire time.In fact, I actually cried once or twice. The first time I cried was at the death of Khalil. Although I knew it was going to happen, the rawness of the scene was emotionally overwhelming. The second time was at the very end of the movie when a plot twist occurs that I won’t spoil. THUG and films like it are promoting social change and activism by spreading awareness of the injustices minorities deal with daily, and it is important that it’s seen by all.