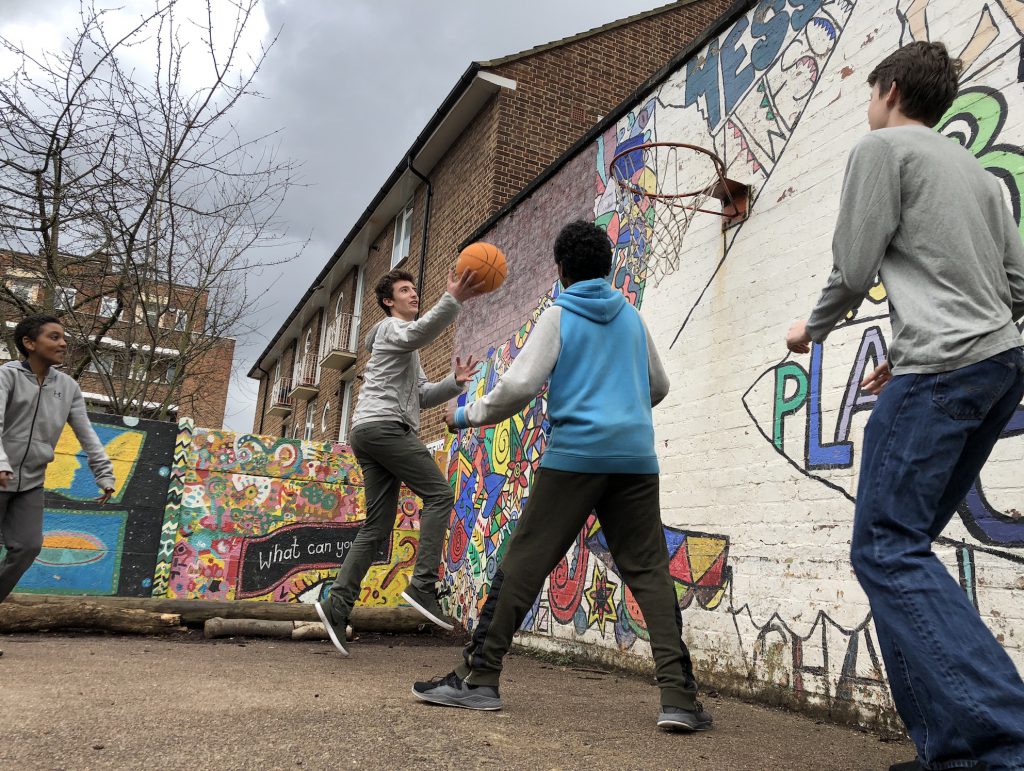 Minos Papadopoulos (’22) was walking through the busy hallways of the High School when the bulletin board outside Principal Devan Ganeshananthan’s office caught his attention. After seeing many of his own friends’ names on the sign-up sheet pinned for community partnerships, Papadopoulos was motivated to also write his name down. Despite not knowing what he was really signing up for, Papadopoulos took a risk that resulted him in making new connections and having new experiences. “You make new friends and it’s really fun that when you go there and they just smile and say, ‘Oh my god, Minos!’,” he said.

Papadopoulos thoroughly enjoyed his partnership at the St. John’s Wood Adventure Playground, because through playing with children he was able to connect and understand them better. After this experience, he believes that all students should volunteer at least once in their lives, whether it’s with the school or outside of school.

According to asl.org, community partnerships give students the opportunity to work after school directly with people from the broader London community. While many established community partnership opportunities are available for students, such as the Adventure Playground, Rugby Portobello Trust, Doorstep and the Winch, some limitations prevent all students who might be interested from participating.

One of the main limitations of volunteering is the physical size of the facilities and the number of volunteers that are required for each partnership. Even though community partnership availability has increased over the past two years, the demand keeps growing. Moreover, the signups often turn into a race, as the spaces are allocated on a first-come first-serve basis.

Director of Service Learning Brandon Block explained that the partnerships have already increased in size in the past few years to provide more spots for students. “We have made all the partnerships bigger and initially people thought that if people made the groups too big, it would make it harder for the experiences to be meaningful, but we haven’t had that feedback, even as we have expanded them to meet the growing demand,” he said.

Additionally, Block believes that students don’t need to fully rely on the ASL community partnerships program, and can branch out into the local community themselves if they desire to. Even though participating through ASL is easier, since transport and other resources are provided by the school, this should not stop students from signing up outside the community. Block suggested that students can participate in the partnerships during the summer if they missed out on doing them during the school year.

Jessica Swanson (’21) is a student who has continued her involvement in a community partnership, Doorstep, into the summer. Swanson believes that she was gifted various privileges at birth, and considers herself lucky; therefore she feels the need to help others as a way to give back, and understands that other people may not enjoy the same privileges and opportunities.

Swanson first signed up for the Doorstep community partnership last year. Doorstep is an organization that provides a safe environment for families who have undergone domestic violence, loss of employment or financial problems. Swanson’s involvement in the program is helping kids under certain circumstances by playing with them in a creative and educational way; providing them with a sense of belonging. This partnership helped Swanson understand that she truly enjoyed volunteering, helping to cement her decision to continue working with Doorstep into summer. “It was something I really liked doing. I wanted to stay in London and do some things around London over the summer, and I really wanted to extend the partnerships,” she said. “I have a quite good relationship with them now because I have been going for a bit.”

Spending time at Doorstep during the summer helped Swanson build on an already strong relationship formed by the weekly visits during the school year. She believes this enabled her to help the kids there on a closer, and more emotional level.

If a student doesn’t get a place at a partnership during the year, continuing the community partnership into summer isn’t the only way to get involved outside of the ASL community.  Finding an organization or community to help is also an option. Besides just giving up time to help the community, one is also gaining work experience. Charity shops such as Oxfam and Cancer Research U.K. offer unique pathways to learning responsibilities and obtaining skills vital in most jobs. Sophia Christodoulou (’21) has gained new experiences by working at a charity shop Shelter which has recently opened on the St. John’s Wood High Street. “I definitely gain work experience. Like I said, in retail, I have learned like how clothing stores work, and how they price things, how they organise the store and I think that’s really important information,” she said.

Volunteering at a local charity shop allowed Christodoulou to obtain new information about working in the real word, preparing her for the future. Christodoulou also believes that it makes a positive impact on society as the organization is non-profit and raises money for the community.

Additionally, Block believes that the SHINE program, which runs at ASL on Saturday mornings throughout the year, is the perfect opportunity to get involved in the community outside of community partnerships. SHINE is an education charity that provides local school children with resources and knowledge that will allow them to succeed later on in life. On weekends, it is more of a flexible setting, where students can play. Grade 7 Aid and SHINE Coordinator, Sean Ross, has explained that there are numerous spots for students to volunteer at SHINE. “For high school programs, volunteering at the SHINE program, we don’t typically put a limit. We had as many as 50 high school students involved, this year it is closer to  37,” he said.

It does not have as many limitations in terms of students who can participate. Ross further explained that students should branch out and not make the strain on the resources an obstacle that prevents them from participating. “Let’s aim for the ideal situation, rather than the limitations,” he said.