Community Arts Building one year on 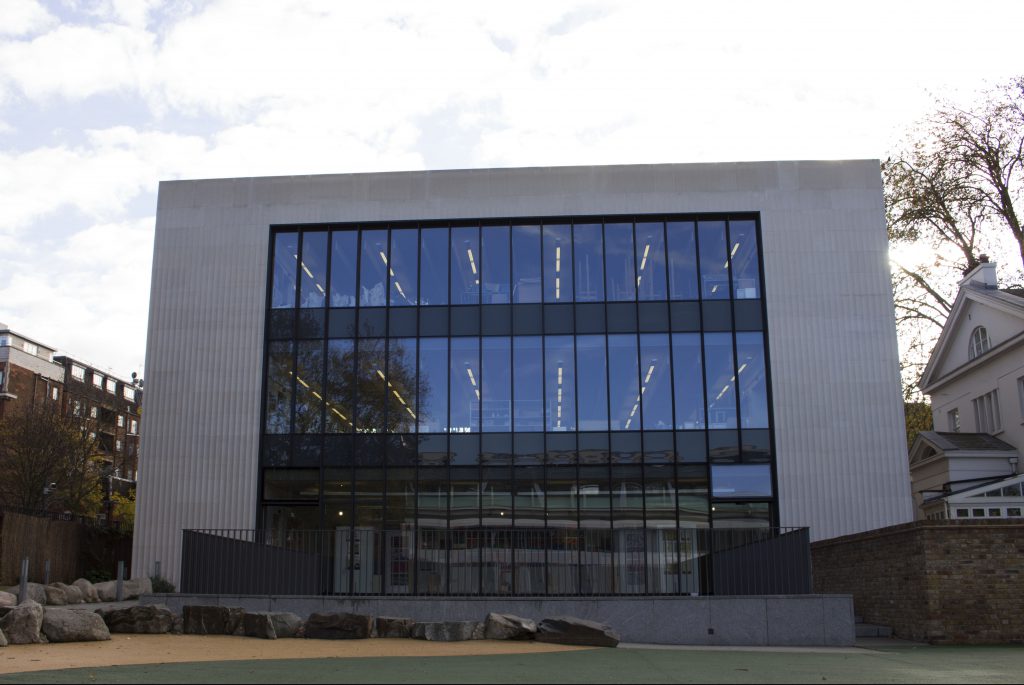 The Community Arts Building has been influential to the middle and high school art programs since its construction in 2015.

MS Visual Arts Teacher Salma Raza said, “There are really only pluses in having the art building. Just to have the space to be able to spread out and make work has been a true blessing.”

Previously, art classes took place where the middle school science wing is located now. The rooms were smaller and had only slivers of windows. “We felt the lack of light affecting us, affecting people even emotionally,” Raza said. Certain days her classes wouldn’t see any light, making students feel either down or particularly hyper. In the new art building, students feel calmer, their energy and mood balancing.

Additionally, Raza feels that teaching in the art building has allowed her to become more in touch with nature and being an art teacher. “I see the birds flying here. I see the trees change,” she said. “It’s just changed my whole relationship to London in a way and to my job and to working here.”

In general, Raza also said that people touring the school, who have to use the temporary side entrance, get a good impression of ASL. “[The art building] being the entrance is a really great thing for visitors because when they come in they’re first greeted with a really nice view of the school,” she said. People can see how at ASL there is a whole building devoted to the arts.

With courses ranging from Drawing and Painting to Photography to Ceramics, all art classes are taught in the Community Arts building. HS Visual Arts Teacher Jennifer Thomas believes that this creates the feeling of one centralized artistic community. “When you’re over here there’s a sense that we’re just a big visual arts community,” Thomas said. Throughout the four levels, the underground to the third, students share the space to create diverse forms of artwork.

Additionally, although some may say it’s isolated from other parts of the community, “[Students] get that sense of freedom over here,” Thomas said. “It’s a creative space.” Students can come to work and are separated from the stresses of the academic world.

This means that students like Shuma Niki (’21), who is a part of the Drawing and Painting II class, can utilize all the space to more easily complete their work. Niki believes that the building helps him to fully focus on his art. “It’s a nice space. It’s pretty big so I can just come in and paint,” he said.

Niki also thinks the classrooms are stocked with enough resources to allow him to do his best. “There’s a lot of tools that I can use to create art,” he said. There are paints, markers, paper and pencils of all different sorts.

Thomas notices in painting classes, however, that the room can become quite stuffy. “Sometimes, we would love to be able to open windows because if a lot of students are painting in here… sometimes the smell is quite strong,” Thomas said.

The decor inside the building is student-made art, with a portion of gallery space on the ground floor for bigger projects. “The students love the idea that they can have their work shown in a really beautiful gallery space with the lights on them and all of the framing and matting and name tags,” Thomas said. Teachers from grades K-12 have all displayed work in the space.

Sana Jumani (’19) was amazed by the building and this area for exhibits when it was first unveiled. “It was like, ‘wow I’ve never been in an art studio like this before. I’ve never been in a space like this.’ And I really liked that they had the gallery space on the ground floor so [teachers] could display your work,” she said.

Nevertheless, Jumani also recognizes a downside to the art building. “I have to allow extra time to get to class. So that’s kind of annoying, but it’s just like I’m used to it now,” she said.

Jumani also added that there were some more stark differences between the Community Arts building and the previous classrooms where she had taken Drawing and Painting I as a freshman. “[The old classroom] was so dark and it was so different in comparison to the art classrooms now which are filled with natural lighting, and they’re so much bigger,” she said.

Another student, Hudson Koyanagi (’22), who is in Film Video Animation, shared similar views to Jumani. “It’s more space, better facilities,” he said. “It’s just a nice improvement… [the building is] a much better setting for art classes.”

Koyanagi also thinks that the construction of the building was an all-round “success” and contributes to the school’s image. “It stands out a lot. It gives the school a better look,” he said. The design, including the windows and extra lighting, especially contribute to the image the school puts forward with the building, Koyanagi added.

On the other hand, he is somewhat tentative about how necessary the art building was in the first place. “The resources could have been used for other more useful projects,” Koyanagi said. “But, the outcome [of the construction] was quite good.”

After having done art during her whole high school career, Jumani, who is currently taking AP Studio Art, feels lucky to have been able to use the art building. “I feel very grateful that the school has facilities like that for the students – for art students, photography and even athletics underneath in the basement.”

Overall, the vast windows, gallery and variety of rooms, each for different kinds of art, are all part of why students and teachers enjoy the Community Arts building. In the future, there will be many gallery exhibits. However, only work such as drawings can be hung for now due to the space being used as a reception for the temporary Waverley entrance.