Yayoi Kusama‘s newest exhibition over promises and under delivers 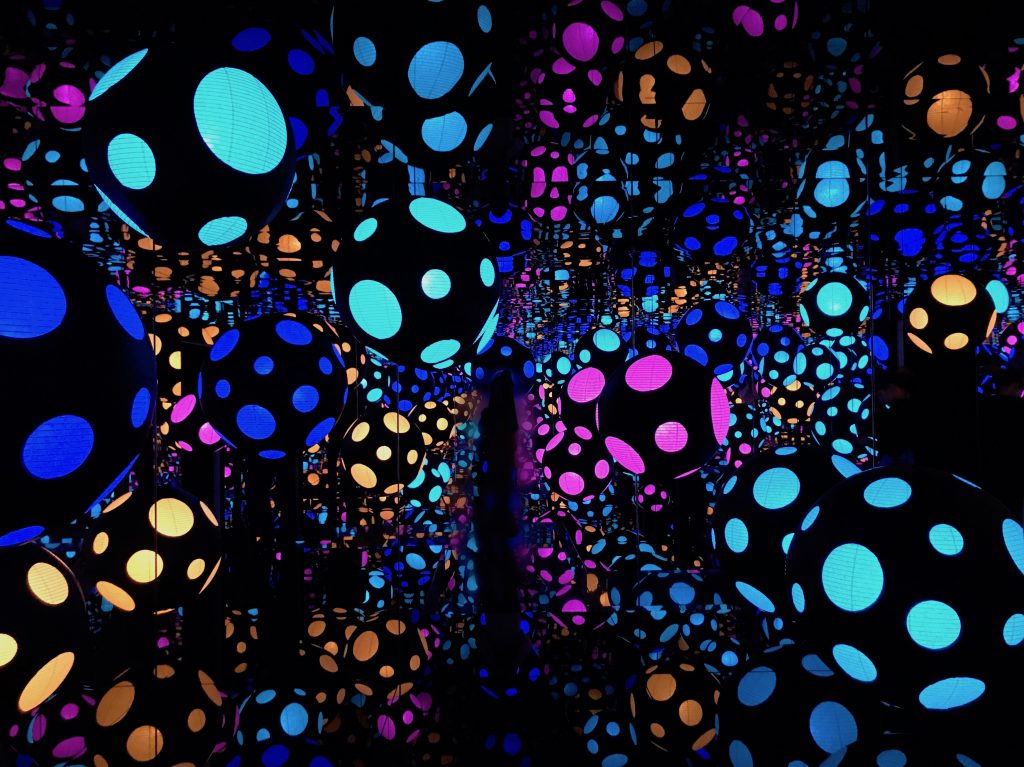 I’ve always found Yayoi Kusama to be an intriguing character in the art world. At almost 90 years old, she is known for her candy-colored wigs, hallucinations and vibrant works of art. With a career spanning almost 70 years and transcending movements such as Surrealism, Minimalism and Pop Art, she is uniquely singular in what she does.

Kusama’s name holds an ethereal and mystical place in my home. She is revered for her innovative and groundbreaking work by my parents, and a book of her art holds a special place on our living room coffee table. So, when I was given the opportunity to see her most recent exhibition at the Victoria Miro gallery in Hoxton, I was thrilled.

Kusama’s latest exhibition, The Moving Moment When I Went to the Universe, is rife with her famed gourd paintings and sculptures, as well as the latest rendition of her signature infinity rooms. The exhibition spans multiple floors and settings with the infinity room and the light-filled box one floor above, a series of paintings and sculptures below, a waterside gallery feature, and a collection of new creations and paintings from her My Eternal Soul series, which debuted in 2017,  in the building next door.

Beginning with Kusama’s newest infinity room, I found it to be the Instagram aficionado’s mecca– the perfect place to stop and take a selfie. It seems that the entire infinity room is designed for social media– you’re only given one minute in the light-filled space, the perfect amount of time to snap a picture. In fact, one woman in line behind me spoke with fear, “Are you sure we’re allowed phones in there?” However, what’s interesting is that the first of her famed infinity mirror installations debuted in 1965 with the exhibition Phalli’s Field, well before the digital age. Somehow over time Kusama’s infinity rooms, which initially made her famous, have made a home on Instagram.

Quite honestly, I felt a little bit cheated by this infinity room. Upon looking online and at the glossy images of my coffee table book, I was slightly disappointed by this exhibition’s infinity room. In years past, Kusama’s infinity rooms have given viewers a feeling of timelessness or weightlessness, as if one were traveling through a brightly lit galaxy or suspended in space.

However this time around, in the one minute that I had to take in the space, I felt slightly underwhelmed. Don’t get me wrong, there is something mesmerizing about the way in which Kusama expertly blends spheres of colored light and mirrors together. That being said, I felt as if I were standing inside of a glorified lava lamp, only to be jolted out of the hypnotic stupor I was in by the gallery supervisor telling me my one minute of time was up.

Downstairs there were only a few of Kusama’s gourd-themed sculptures and paintings. While impressive, I feel as if they didn’t fill the space well; there almost weren’t enough paintings for the space that gallery provided, making me feel as if the gallery were attempting to capitalize on Kusama’s fame.

I did find one set of paintings particularly impressive: A collection of yellow and black dots filling the canvas that looked like mirrored images of each other. Originally believing that Kusama used a stencil to create the pair of paintings, upon closer inspection, the paintings had a few discrepancies between them– showing that Kusama had painted each one with detail and precision. 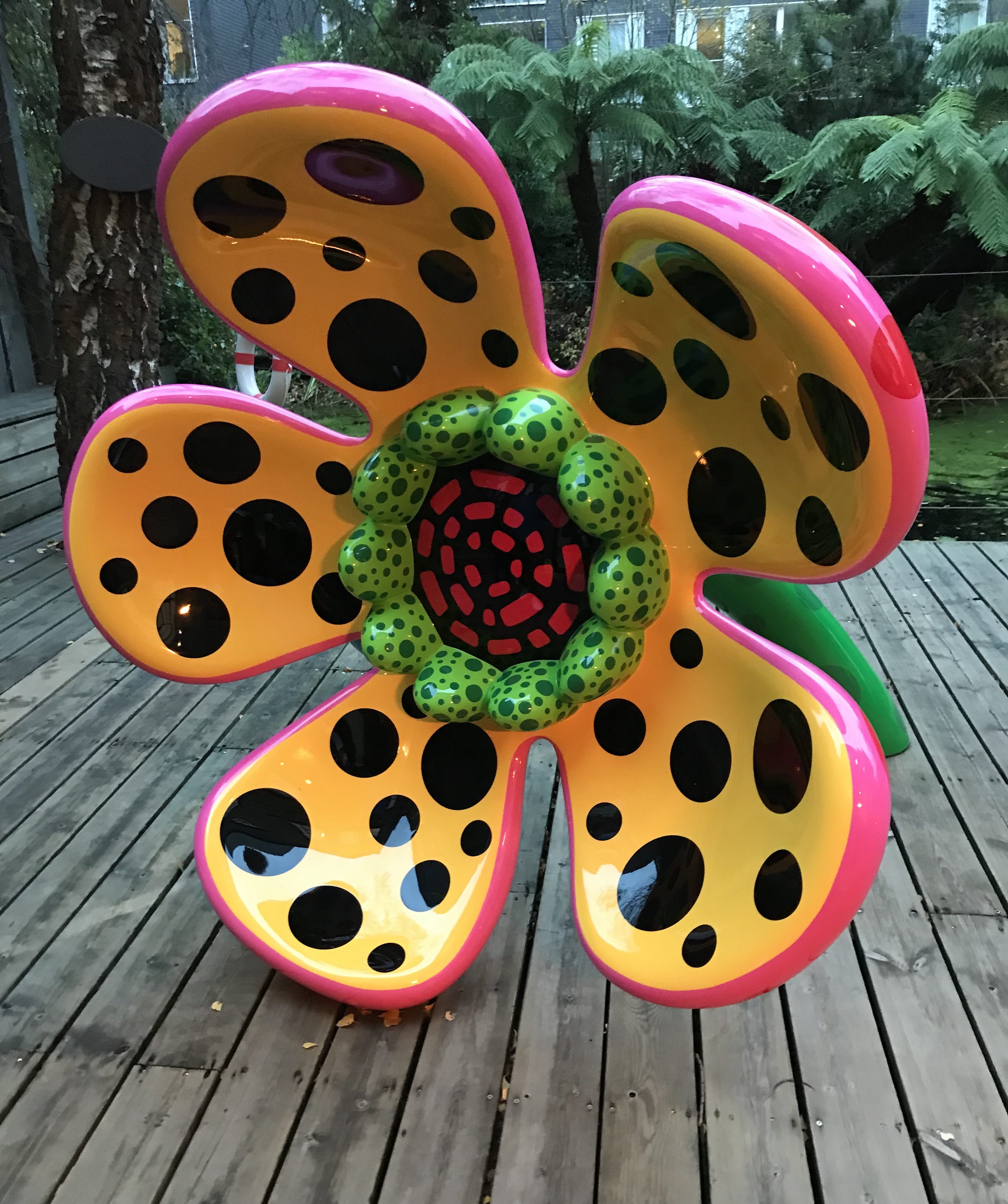 Outside there were three large flower sculptures made out of painted bronze, resembling the cartoonish flowers featured in Alice in Wonderland. The sculptures were painted in vibrant, neon hues and covered in Kusama’s signature polka-dot pattern, contributing to the overall playful and child-like theme of the exhibition and Kusama herself.

In the adjacent building, I was ushered up three flights of stairs to view new pieces of work and a few paintings from Kusama’s My Eternal Soul series. Spanning the entire length of one wall was about 20 five square meter paintings each uniquely eclectic and colorful.

This was easily my favorite part of the exhibition as each person fixated on one painting that seemed to reflect their personality. For my sister, Emmanuelle (’16), it was Adoration for Eternal Space, a painting with a large light pink negative space; for me, it was Garden of Women in Blooming Youth, a painting that was made up of three women mirrored, with halos of color surrounding them. The titles of each painting were poetic in their own right adding, once again, to the idea that Kusama is able to create an entire universe of her own.

On the whole, I was left with mixed feelings about Kusama’s exhibition. Clearly, she is an innovative and experimental artist. But somehow, her work has been reduced to something most people only deem as an Instagrammable opportunity, which I would like to believe is nowhere near her original intent.

The exhibition ends December 21, however, tickets are fully booked. According to the Victoria Miro gallery, if you look at their social media websites, there might be an additional tickets release. Entry to the exhibition is by free timed ticket only.
Photos by Alexandra Gers