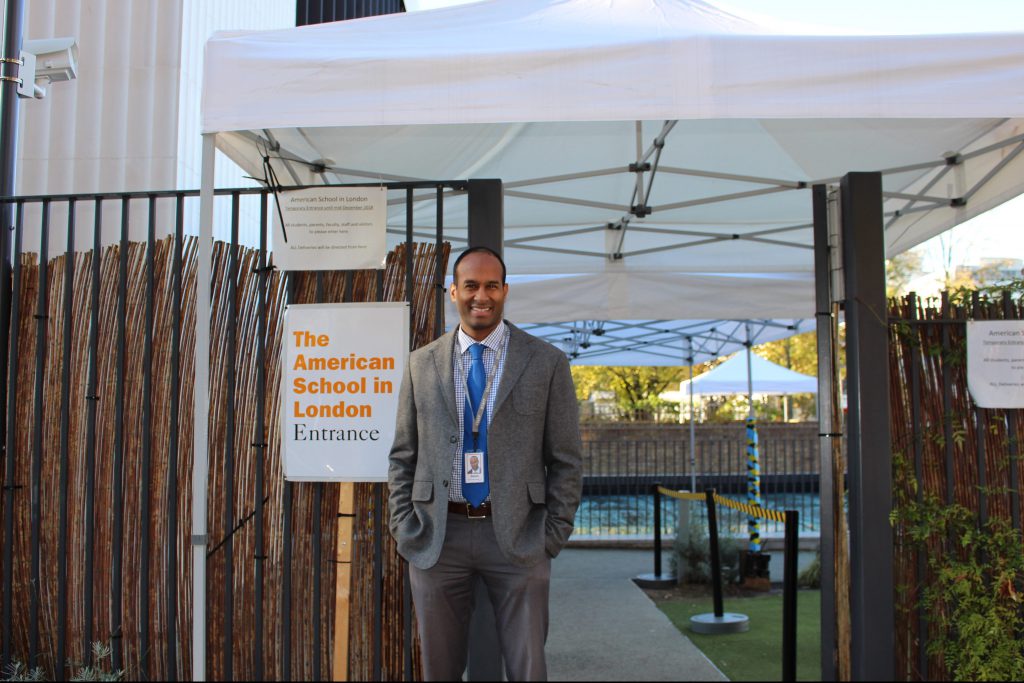 Staff Writer Anastasia Ruimy asks High School Principal Devan Ganeshananthan what his favorite memory from high school is and the lessons he learned.

Staff Writer Anastasia Ruimy: What is your favorite memory from your high school years?

High School Principal Devan Ganeshananthan: I grew up in [Bethesda], Maryland and was there pretty much from third grade until I graduated from high school.

In tenth grade, we had a very large snow storm and the schools were closed. So me and one of my friends, David, were making some extra pocket money by shoveling driveways. Where we were living, everyone had an individual house, and each person would have a driveway. We had, I would say, a business shoveling different people’s driveways.

The snow came on Sunday night. We knew that we were going to be closed for school on Monday. So Monday we were shoveling and the snow kept on coming, and we made a good amount of money. Then Tuesday came and school was still closed. We kept on shoveling, working maybe 10 to 12 hours a day. We didn’t have a machine, we were just doing it with our hands and a shovel. Wednesday came and there was another snowstorm that came so Wednesday school was closed again. Then on Thursday, the snow had stopped, but we had thought that we were going to be off, so I went to my friend’s house.

I walked there, it was a few blocks away, maybe a quarter mile away, early in the morning maybe 7 o’clock. I had all my shoveling stuff and my boots on and everything, I was ready to go. I didn’t have anything for school. And we had seen, then it was on the television, about the announcements for school to be closed, or sometimes there is a delay so it would be delayed by two hours or one hour or three hours. So we saw that our school was going to be delayed by two hours, not closed. We were very upset about that because we wanted to be shoveling snow. So we came up with the idea that we were going to call the television station and say that we were working at the school and that we have decided to close the school.

We called the television station and talked to someone there and we knew the person who would be calling so I said, ‘I’m such and such person, it’s been a very difficult decision but we’ve decided to go ahead and close the school system after all. The safety of the students is very important.’ So then they said, ‘OK, thank you for calling. Please hold on for a moment.’ I held on to the phone and then you could see on the T.V., at the bottom there’s like a little information ticker or ribbon coming, they flashed that the school is now closed. And so I was on hold, holding onto the phone for it felt like a long time, probably only two minutes, three minutes. And so then they transferred me to someone else, and they said, ‘Thank you so much for calling in, we just need the password.’ And I still remember saying, ‘Password?’ I didn’t know they were going to ask for any kind of password, but it makes sense. I still remember saying, ‘Pencil.’ They didn’t even respond, they just hung up the phone. And then we saw on the television channel that the person who was giving the news, had said that was misinformation about the school system, we’re sorry someone tried to call in about that. But for those two to three minutes, we had closed the school, which was amazing to think about from a student’s perspective.

Now it’s very different, it’s all electronic. In the States, you have to log into a website, you have to have multiple passwords. No one is able to do what we did. I was in high school right before the internet in the mid-’90s. So this was right before email, right before the internet became very large. I remember we went to school that day and there were a few students who were watching that television channel at the time that we had closed the school and the announcement came out. They were talking about it, they were saying, ‘Oh yeah, can you believe the school closed and then it was opened and what happened?’ And me and my friend David, we didn’t say anything. They didn’t find out. Today I just don’t think it would be possible.
Photo courtesy of Ganeshananthan Featured photos by Emily Forgash