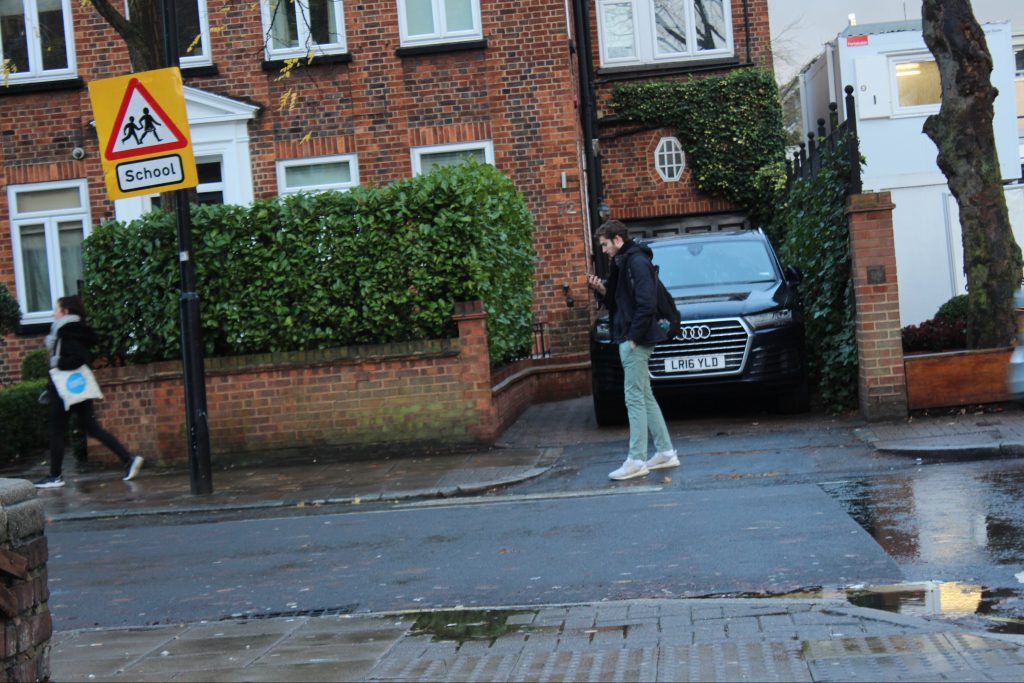 Muggings aren’t just a nightly occurrence, they can happen in broad daylight with the assistance of motorcycles. Katy Welch (’22) was near St. John’s Wood High Street after school in October 2017 with her friend, when she was approached by a person on a motorcycle. “I was watching something on my phone and I had my phone out, and then someone came behind me and grabbed it out of my hand,” she said.

Welch’s story doesn’t end there – she refused to let her phone go that easily. Instead, she “grabbed it back from [him], screamed really loud and ran away.” However, it seems that the thieves had planned for this type of reaction. “There was someone behind us that was trying to cut us off from the back, but luckily I sprinted out of there before he could do that,” Welch said.

Since there is no aggressive contact involved in phone snatches from a moped, targets can be of any age or size. Alvin*, an ASL dad, got his phone snatched and was almost robbed a second time. At 9:30 p.m. on a Friday in September, Alvin was waiting for his wife outside of The Ivy on St. John’s Wood High Street. Standing five feet from the corner of the road near the building, Alvin was checking some emails when “two guys on a scooter came by very quickly and grabbed the phone right from [his] hands as [he] was using it.”

Thieves attempted to grab Alvin’s phone a second time in Paddington about a month later while he and his wife were outside of a pub in the afternoon. Similar to the first incident, “a guy on a scooter came up on the sidewalk, but this time it was a single guy and he was dressed in a [fake] Deliveroo outfit. He was about to reach for my phone, when our dog lunged at [him], and he was so focused on [the dog] going after his legs, he wobbled and then peeled away.”

Alvin has made some changes in his phone usage in public since these two occasions. “One thing I’ve done since then is use earpieces because they’re really good with Siri. If I’m walking and I get a text I can just tap and say Siri read me the last text, and so I’m able to use my phone more and more without taking it out of my pocket.”

Welch has made similar modifications to how she uses her phone. “Now I don’t hold out my phone ever, I either don’t go on it or I keep it so that no one can see it. I definitely don’t put [my phone] out there anymore,” she said.

Alvin’s advice to students who get their phone snatched is to “let it go, it’s gone, don’t try and get it back, it’s not worth it.” Just because this tactic worked for Welch, doesn’t mean it’s the best course of action if one was to find themselves in that type of situation.

Instead, Alvin thinks you should try to wipe the phone. “Get a friend or a parent and call the phone provider: Vodafone, EE or O2, and tell them you’re phone was stolen and then they can cancel the phone,” he said.

Head of Security Roi Yefet agrees with Alvin and advises against people trying to take their phones back. “My advice to everyone streetwise is don’t be a hero. It’s just a mobile phone. It’s a bit annoying that someone is taking your belongings, but don’t be a hero. It’s not worth it,” he said.

Yefet often sees student and faculty unintentionally advertising their belongings. “As soon as [students and faculty are] passing our gate, their touching their mobile phones, listening to music or texting a friend. It doesn’t matter if you have a Samsung or an iPhone, they’re all in the range of £500 onwards, and that’s it, you’re a target,” he said.

Yefet believes that students and faculty should change their habits when walking in public to stay safe. “Be aware of your surroundings where you’re walking, plan your route accordingly and try to go with a group of friends together,” he said.

The Metropolitan Police also suggests staying aware. Their website says that it is important to “look up and look out” when in public. In addition, it says that it would be wise to activate security features on your phone that could help “wipe data, lock your handset or prevent a thief from restoring a phone to its factory settings from another internet device.”

Fortunately, the situation has been improving in St. John’s Wood, according to statistics that Yefet and the security team have been collecting. “[There] used to [be] three snatches per day, but now it’s one snatch per week. The reason for that is the Metropolitan Police ran a sting operation successfully, and they caught a couple of gang members which reduced the crime in the area,” Yefet said.

Despite these optimistic statistics, Yefet notes how it is still important to focus on safety in an effort to prevent these incidents. “It still occurs and we can see some on the [security] camera, it’s not done yet.”