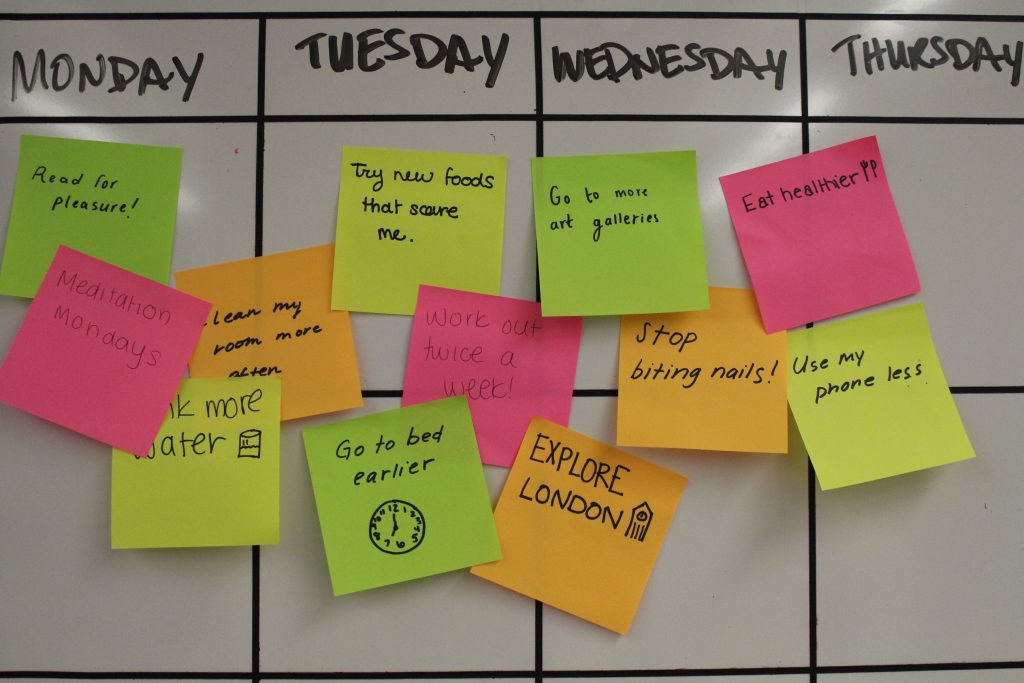 January is often a time for people begin to think about what they would like to accomplish for the rest of the year. When the clocks strike midnight on January 1, individuals around the world set their minds to achieving goals. However, as the year progresses, these resolutions can sometimes be dropped faster than the famous New Year’s Eve countdown ball in Times Square.

Even when people make goals and resolutions for themselves in the new year, sometimes they can be so challenging that they seem completely out of reach.

Similarly to Michaelides, Head Librarian Karen Field also feels that new year’s resolutions can be hard to keep. “When I was younger, I made so many unrealistic resolutions…to eat better, exercise, read more books…I just felt like I was just failing all the time,” she said.

According to an article published in Forbes in 2018, studies show that it takes approximately 66 days for a habit to become “automatic.” Therefore, if trying to achieve a goal that is challenging, the likelihood of someone keeping that goal until the end of the year is slim.

A Business Insider article claimed that 80 percent of new year’s resolutions fail by the second week in February. Instead of focusing on the steps to achieve the goal, people think about the goal itself, and how big it is rather than the steps they should take to achieve it. Therefore, many people decide to give up on it on their overall goals.

The same Forbes article claims that goals are more achievable if they come with immediate rewards. Focusing on a small, but achievable goal can motivate people to work more productively.

For example, Field decided her 2019 resolution would be to read more. “I made [this resolution] so I think I can do it. But also so that it’s challenging,” she said.

Just like Field, Michaelides chose a resolution she thought she would be able to achieve. “My new year’s resolution is to drink a liter of water everyday,” she said.”This year I decided to choose something that I could actually accomplish.”

The Forbes article further claims that starting a regular practice of these goals can encourage hearts and minds to work together and, in doing so, achieve a goal.

World Language Teacher Ting-Chi Li follows this concept when thinking about her resolutions. Li made sure to choose a resolution she knew she was able to achieve — to read more. “During the break, I made sure that I started a solid foundation, which happened,” she said.”I made sure that I read more regularly.”

Into the second week of February, it is the time where people tend to drop their new year’s resolutions. However, Michalides, Li and Field have all been able to keep up their resolutions. “I haven’t been drinking one liter, but I have been drinking one water bottle [a day],” Michalides said. Not only has she been keeping up her resolution, but she also feels healthier this year in general.

Just like Michalides, Field has also been able to keep up her resolution. “I made [my resolution] manageable, unlike what I normally would do. “My challenge is 40 books in the year, and I have done about nine,” she said.

Li has also been keeping up her resolution of reading. “I really try to remind myself to read a book…Reading books helps me to relax, switch off, refresh and recharge myself,” she said.

In order to keep one’s resolution this year, both Field and Li believe it is important to take the resolution in steps. “Make sure it [the resolution] isn’t too complicated,” Li said. Echoing Li, Field said “It’s good to break it down, so you can hold yourself accountable in smaller doses.”