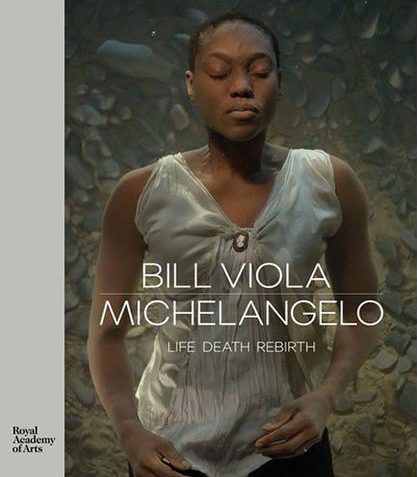 A video of a dying woman and Michelangelo’s auburn sketches of Hercules are not something you expect to see in the same exhibition, yet that is what happens throughout video artist Bill Viola’s Life Death Rebirth exhibition at the Royal Academy. Michelangelo, who since the creation of his legendary paintings on the Sistine Chapel ceiling and revolutionary David sculpture has been a household name, is redefined as Viola’s video work is paired with Michelangelo’s to create an intense environment for anyone stepping into the dimly-lit rooms of the exhibition.

The theme of the life cycle is consistent throughout the exhibition as from the moment they enter the gallery visitors are met with a video showing man sinking into water and slowly drowning. While it was unexpected for the exhibition to begin with a brazen display of death, it is understandable as to why The Messenger was the first installment. Despite being only middle-aged, the video’s subject is not fighting his fate as he sinks but is instead accepting the most inevitable stage in anyone’s life: death.

The experiences and span of all lives differ, hence it was clear from that point that there were not going to be any similar or singular narrative works in the exhibition at all.

Michelangelo’s work is first featured in the second room, as one lit wall of the room is adorned with his drawings featuring Mary and Christ, such as The Virgin And Child, along with The Taddei Tondo: a marble sculpture in the middle of the same wall, depicting similar characters and concepts as its surrounding sketches. However, the same room also included some of Viola’s own video art. One piece, Nantes Triptych, documented the reality of the moments before birth and moments before death as three adjacent panels displayed these fundamentals.

These are messier or unappealing to see in reality, yet contrastingly, Michelangelo’s sketches, which are on the opposite wall to these videos, depict biblical births and sacrifices which are continuously praised. While to me the piece demonstrated how similar the actions of birth and death are to the true start and suffering of Christ, everyone else there seemed fixated on how morbid it is to watch someone at the end of their life or how awkward it is to watch a woman giving birth.

The installment a few rooms on, Slowly Turning Narrative, quickly became a favorite. Occupied by a massive spinning screen in the center of the room, plain on one side and reflective on the other, it is initially startling. It was a struggle at first to make out the revolving projection on the walls, which seemed to turn too quickly to fully take in the image. Simultaneously, another video was playing on the plain side of the screen, hence it took a while to gain a rhythm of shifting focus to the walls or the screen. As hypnotic as it was to follow either the turning projection on the walls or the projection of a face on the screen, the audio that blared as the screen made its repetitive revolutions was even more engrossing. “The one who controls. The one who believes. The one who observes. The one who sleeps,” are a few of the commands repeatedly uttered by a man. Hearing a voice whilst watching the screen turn over, and over, and over again felt like I was being lulled into a trance, totally immersed in the concept of the endless life cycle.

[perfectpullquote align=”full” bordertop=”false” cite=”” link=”” color=”” class=”” size=””]“The exhibition undeniably highlights the timelessness of birth and death as it creates an unforgettable experience for the viewer – the art is there to submerge the patrons, not to just be viewed by them.”[/perfectpullquote]

The final installment of the gallery was undoubtedly the grand finale, even if it was in the smallest, busiest room. This piece tests the viewer’s patience as the entirety of Tristan’s Ascension (The Sound of a Mountain Under a Waterfall) must be watched before Fire Woman begins to play on the same panel. The first video resembled a body, perhaps a soul, rising up into the light, which is a classic interpretation of ascending to heaven.

However, Fire Woman was a different story entirely. The silhouette was dressed in flowing clothing as if they were robes of a nun, and I’m almost certain that I heard a giggle from another patron about how strange it would be if a nun did descend and defy the norm.

Throughout the exhibition, there were no rooms consisting solely of Michelangelo’s work, as each room either paired his work with Viola’s work, or staged Viola’s work on its own. Although Viola’s work uses a modern medium along with modern subjects, Michelangelo’s work could have been given as much emphasis in the actual exhibition as it was in the description for the event. Nevertheless, the entirety of the exhibition displays birth and death in a new light as it creates an unforgettable experience for the viewer – the art is there to submerge the patrons, not to just be viewed by them.