Making it through March 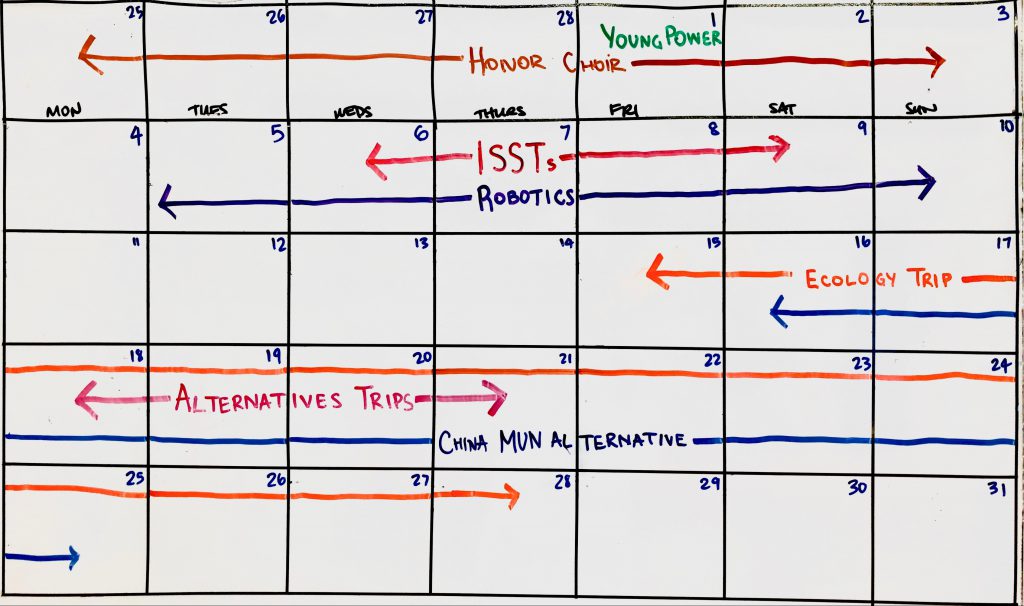 When people think of March Madness, they often picture basketball brackets and the NCAA. But the madness isn’t only felt on college campuses in the U.S. Many students have recognized that March at ASL has a madness all of its own and is increasingly a time of chaos and stress. ISSTs, robotics, Honor Band, Honor Choir and the addition of the Alternatives trip consume much of students’ time, along with their regular schoolwork.

As a freshman and a member of the robotics team, this is Charlotte Fink’s (‘22) first experience of the High School’s ‘March Madness’, and she attested to its busyness. “It’s definitely been hectic so far. I have a lot going on just mainly with school and robotics, and also with my community partnership,” she said.

The Ecology: Expeditions class traveled to South Africa for their two-week field trip from March 14 to March 28. The class broke into two groups of six to travel around the Drakensburg Mountains and the iMfolozi Reserve, where they were disconnected from technology and hours from the nearest cities. Through backpacking in these remote areas, students observed wildlife and learned how the human relationship with the planet has evolved over time. • Photos by Ivan Hauck

Fink added that this was very different from her experience in midde school, when her school work and extracurriculars never seemed to clash. “In middle school, you really didn’t have those time commitments like you do in high school,” Fink said.

From Monday to Wednesday, Fink normally gets home at 7:30 p.m. and finds managing her time to be stressful.  “Once I’m done eating and catching up with family I’m really tired because it’s usually 8:30 or 9 and then I have to do my schoolwork. So it’s definitely challenging because I’ll get to sleep around half past 11 on a good night,” she said.

Kaito Arai (’19) participates in a multitude of different extracurriculars, many of which involved a weeklong trip including Honor Choir, Robotics and Music Tour, which took place from April 4 to 7. These trips hindered Arai’s ability to keep up with his workload, similar to many other students. However, this year was different from others. “It was strange because I didn’t have too much to do this year. I didn’t have much homework, just mostly tests that I had to make up,” Arai said.

Carrie Kim (’22) participates in both robotics and band and was on Music Tour. Kim is worried she will find it difficult to have the school week starting the following day. “I think it’s difficult when school trips extend into the weekends because then I have less time to catch up with my work before school starts again,” she said.

Fink feels that the school could manage this better in order to make it less stressful for the students. She thinks that “teachers need to be more aware that students are committed to things after school and that assigning 3-4 hours of work per night is not possible for many students. And if [students do the homework], then it’s at a detriment to their mental and physical health.”

“We do need to revisit what our expectations are,” Assistant Principal Karen Bonthrone said. Some students feel overwhelmed with the amount of work when coming back and are not able to do everything that expected from them.

In order to combat this, Bonthrone hopes that the absence sheet helps students to get on top of what needs to be done beforehand so that they can plan accordingly. “No matter what, kids who are out when class is still continuing are going to have to do catch-up at some point,” she added.

Kim found the recently moved Alternatives trips to be a nice addition to the already-busy period. “The Alternatives trips were very helpful because I had a weekend before and after to catch up on all the work that I needed to do, and I think that it was nice that we had a break in the middle of March that the whole High School went on so that I didn’t have to make up even more work,” she said.

Arai didn’t enjoy the shift in date of alternatives to March from early October. He believes that there is too much going on in the High School during that period. “I don’t think this only because I had several trips, but I’m guessing for juniors, it sucks with standardized testing and college applications. I don’t think they should do it then anymore,” Arai said.

Bonthrone said that a big reason as to why alternatives was moved was “to try and relieve at least some of those trips. The thinking behind it, was to try and relieve the pressure so students who are missing school for things like the ecology trip aren’t missing out.”

Bonthrone realizes that due to trips students may feel overwhelmed, however, she also realizes that “it’s not fair on the people who are sitting in the classroom to be just sitting there twiddling their thumb.”

However, Kim doesn’t feel as if the trips were too draining. “This March, I was on a lot of trips which took up a lot of time, but I think that if you handle your schedule well, it isn’t hard to manage all of the work that you get,” Kim said. “There isn’t necessarily more expected from me during March than there is in other months, and although I missed a lot of school, I felt like I still had the time to handle it all.”

Similarly to Kim, Arai doesn’t believe that there is too much expected when he goes away on trips. “The teachers usually know that you’re going to get busy on these trips. So they don’t really have high expectations for you to actually compete for work I’m supposed to do,” he said. “Although I miss a lot of school and work this time of year, it’s worth it to me,” Arai said.
Cover photo by Quinn Whitman
Photos from @aslrobotics and Ivan Hauck