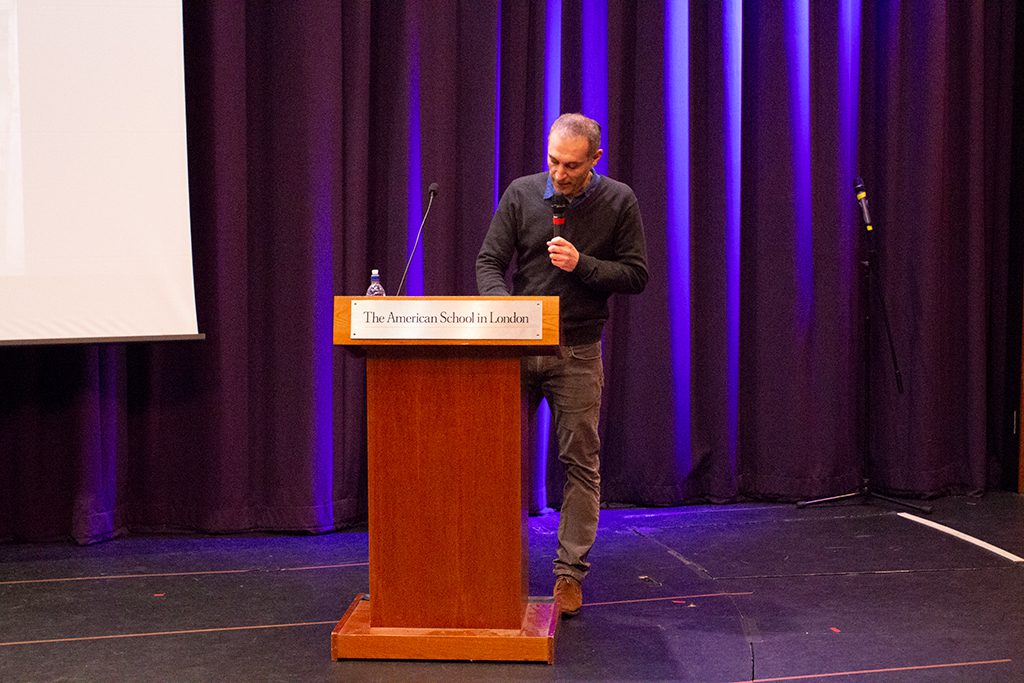 Author and this year’s Bergeron Fellow Ben Faccini draws inspiration from his migratory upbringing as he tries to help others find a voice through education. Faccini grew up across France, Italy and England, before attending university at King’s College, Bristol University and Padua University in Italy. Because of his many relocations, Faccini does not consider himself to be from one place. “I naturally relate to people who feel they are spanning various cultures… it’s the story of my life, trying to fit in,” he said.

Faccini’s first job out of university, where he studied literature, was in education. “I worked for UNICEF and UNESCO, working for kids who had no form of education at all. It’s what they call a non-formal education, so outside schooling,” he said.

Faccini describes his initial work there as documenting, supporting local projects, charities, NGOs, governments and fundraising. However, Faccini’s work gradually transitioned toward more direct education work. “Though I never taught street and refugee kids directly, I was involved in putting together education programmes for them and making sure the successful ones got replicated by governments,” he said. Faccini would ask himself questions such as, “How do you get someone to learn when there’s no structures or school and they can’t read or write?”.

Once Faccini began writing more seriously and published his first novel, The Water Breather, in 2002, he began to teach more directly. “I worked for a charity called First Story here in the UK which helps promote creative writing in challenging schools (where most kids are on free school meals). I sort of developed my approach to teaching there and then I applied it to Writers’ Seminar at ASL,” he said.

Faccini has made a commitment to empowering others to find their voices and tell their stories. “I personally believe that everyone has something to say and I think everyone has both a unique perspective and a story,” he said.

Faccini’s upbringing has also inspired the content of his writing. He mentions identity as a major theme in his body of work, describing himself as someone who is equally interested in character and plot. “I investigate characters and think about stories based on those,” he said.

Regarding his own writing process, Faccini feels that “fiction is very much about having a voice in your head.The characters come alive in your head and you want to give them space and somehow they push you in different directions,” he said.

Faccini also emphasized the importance of incorporating perspective into writing. “I think it’s very important to anchor everything in personal experience so you know what you’re dealing with. Even if you’re writing about a very different experience but somehow there’s a kernel of truth that’s true to you, it gives your work that extra edge.”

However, Faccini also recognizes the barriers that prevent many people from writing or even beginning to put pen to paper. “I think what happens is that a lot of people get very self conscious about writing. They sort of get blocked and feel as if they can’t do it or they have nothing to say,” he said. Faccini believes that the solution to this is simply to “get something down.” “You could have two or three words on the page, but at least that is something which can take you somewhere else. If there’s nothing, then you have nowhere to start,” he said.

With his involvement in classes at ASL, Faccini pushes students to think spontaneously in order to avoid feeling blocked from inspiration and thought. “I think that the thing that has influenced me most with my work at ASL is the concept that all writing relies on being attentive to the world, to coming up with ideas, to channelling personal experience in order to find a voice, to giving constructive feedback and confidence in one’s own opinion as a writer,” he said.

Faccini cites the reason for these roadblocks as being that “people don’t realize how much they know about themselves or they distrust themselves.” This is also where Faccini’s interest in education comes into play. “Once you get something down you begin to spark a train of thought…  I suppose what it is is tricking the mind, which also goes back to education where so much of it is about how you think about yourself and how much you become aware of how you’re learning,” he said.