The Standard • 29th May 2019 • https://standard.asl.org/12340/news/food-gaming-banned-in-learning-commons-to-promote-study-environment/ 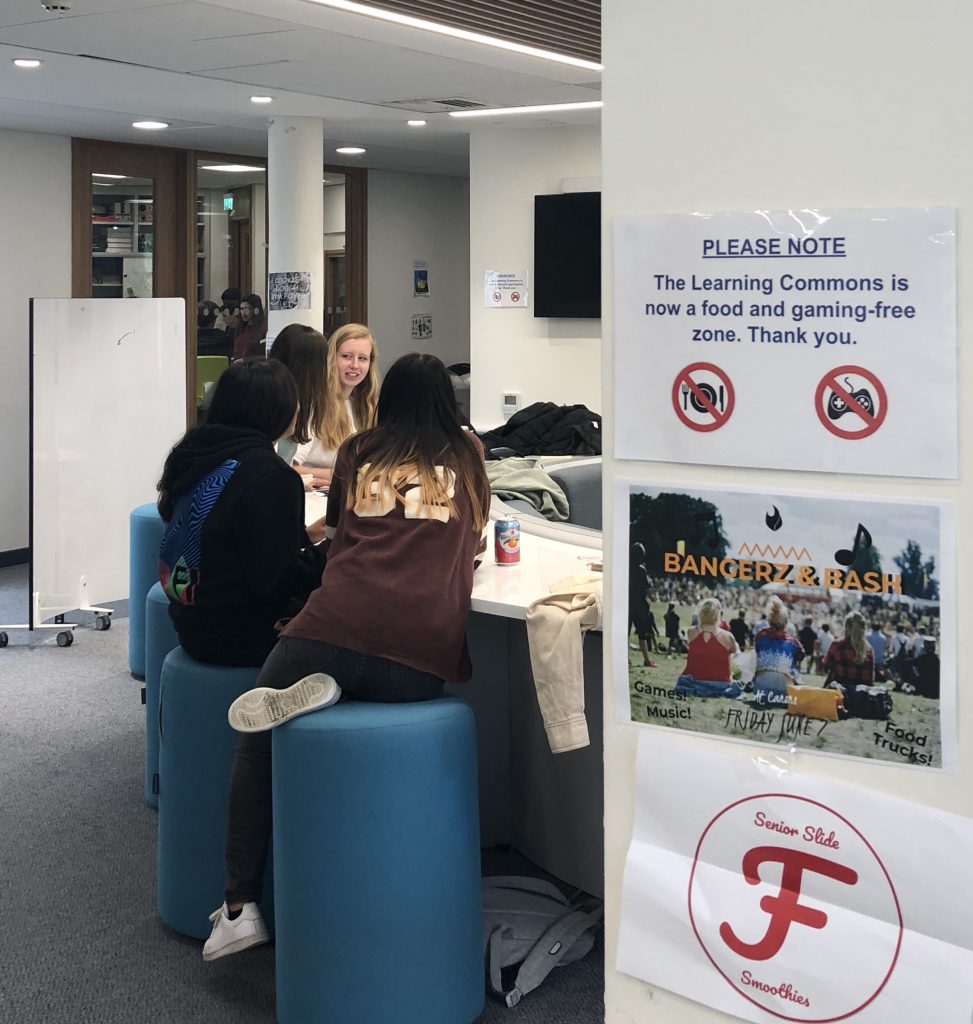 Following complaints from teachers, students are no longer allowed to eat food or play video games whilst using the Learning Commons. These changes come in response to the frequent untidiness in the space, in addition to the Learning Commons not being used for its original intent: a space for collaborative learning.

George Yardley (’21), who uses the Learning Commons to play video games and socialize, understands why the rules were put into place. Yardley described the space as “disgusting” due to the fact that the couches were stained with leftover food and gum.

Similarly to Yardley, Nico Schmidt (’21) believes that the ban on food is important because students tend to leave spills or food residue uncleaned. “If you look at the couches they are absolutely disgusting from people spilling food on them and people leaving their trays for other people to pick up,” he said.

Along with its untidiness, Schmidt believes the Learning Commons was not being used in the way that was intended. Before the rules were introduced, it was rowdy and “people just were playing games on their laptops,” he said, making it distracting for students trying to learn or talk with teachers and peers.

Computer Science Teacher Livia Piloto found it frustrating that a space designed for meeting with teachers and collaboration was being used for gaming and socializing. “It’s called the Learning Commons for learning,” she said.

Echoing Piloto, Director of Student Life James Perry said the vision for the Learning Commons was no longer being upheld. “The purpose of that space was truly to learn,” he said. “Ultimately, we wanted to build a space that was conducive for idea generation, maybe it’s catching up on an assignment, doing some reading, or just thinking, talking, or just chatting with friends.”

Rachel Brooks (’22), a member of Student Council involved with discussions regarding the decision to ban gaming and eating and explained that students were initially going to be given a warning, though the administration ultimately decided to implement the ban in order to create a quieter and cleaner learning environment.

In her opinion, the two uses of the Learning Commons (recreation and learning) could not co-exist because of the amount of noise from students playing games.

In addition to the noise, Perry also cited the general uncleanliness and the occasional smell from food led to the implementation of the rules. “We thought that these were the two biggest things that really led to it not being conducive for learning,” he said.

However, Yardley does not think the new rules will help the lack of learning or solve the problems with how the space has been used. He recalled a recent visit after the rule change when students were playing games and eating.

Brooks hopes for the current rules to instill a culture in the Learning Commons for the future that won’t need as strict restrictions on food or gaming, while maintaining its goals. “Once students realize that the reasons these rules were put in place [was] to make it a study space rather than a social space… next year [the administration] would consider taking the rules away,” he said.

Perry said that “frequent abusers” of the rules could ultimately face the SFDB for Code of Conduct infractions, but he “would like to think that the students would enforce [the new rules] themselves.”