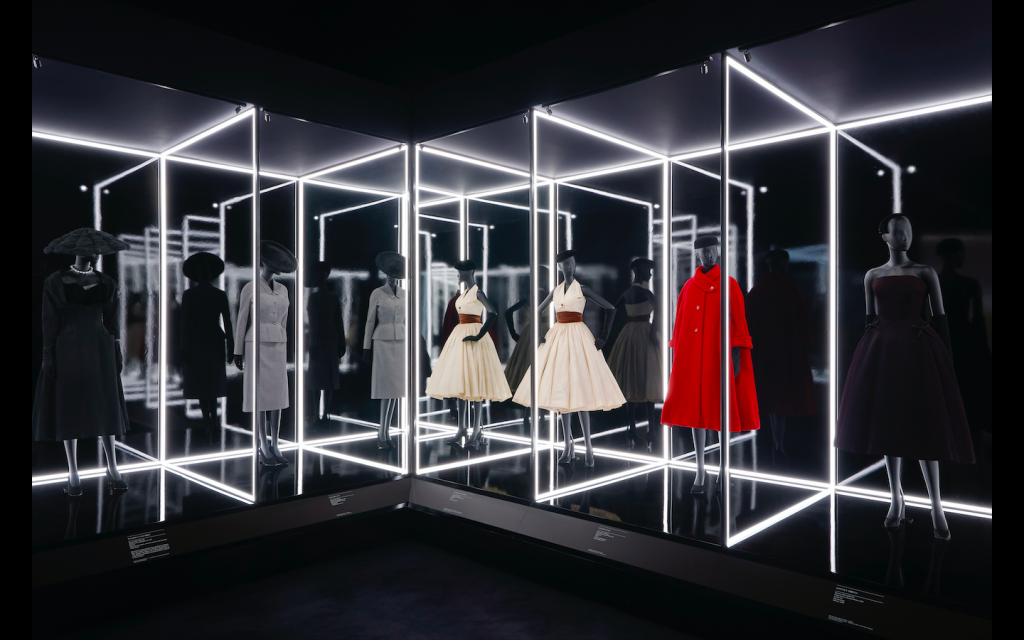 What to expect at the Christian Dior: Designer of Dreams exhibition at the Victoria and Albert Museum was initially a mystery. Christian Dior SE usually flies under my radar except for the occasional trip to Selfridges or on advertisements in the tube. Previously exhibited as Christian Dior: Couturier du Rêve at the Musée des Arts Décoratifs in Paris, the installation garnered widespread acclaim until it closed in January 2017. However, since February, the exhibition has been reinstalled at the V&A to honor Britain’s influence on the designer. Additionally, some of the pieces showcased were designed by other artists under the direction of Dior as a visual representation of his success.

Each of the rooms is decorated according to a specific Dior style or period in the designer’s life. These scene changes helped the visitor to better understand Dior’s life and the inner workings of his thinking, as well as the legacy he left for future designers.

The first room, The New Look, focuses on how Dior changed the fashion industry through his innovative style. My eyes were immediately drawn to an outfit in the center of the room: a white jacket with a black striped skirt. One of Dior’s earliest works, Bar Suit (1947), introduces us to the life and style of Dior. It was one of the simplest designs of the exhibition but helped me to understand the elegance of the display.

Dior’s design choices often played with structure and proportion to express attitude, which caused many to debate them upon initial release. These critiques caused Dior to develop a series of 22 collections that defined his tenure as creative director for the House of Dior. In The Dior Line room, he plays with different dress shapes to prove that they look good on all women– no matter their size or body type.

The “H” Line was deeply critiqued for the belief that Dior was suppressing curves in his garments, something I also observed within this specific collection. Constructed in an “H” fashion, the pieces tended to be tighter around the waist and flowing out at the bottom and top, giving it an “H” shape.

Many of the dresses in this room were showcased in what seemed to be a “runway” style, as the outfits were lined up with lighted panels like a runway, showcasing them each individually. This presentation allowed me to fully appreciate each dress individually— something I couldn’t always do during the exhibit.

By the time I walked into the next room, Dior in Britain, I had already become accustomed to the more minimalist designs created by Dior, so this room was a pleasant surprise. The dresses in the room brought out the true Anglophile in Dior and matched the British style of the time. Much like New Look, Dior in Britain featured a single dress in a glass case, backed by a wall of 13 dresses inlaid. This dress was adorned with sequins and much more color. It was easy to to visually observe Dior’s love for Britain through the dresses he created.

Inspired by his mother Madeleine’s Belle Époque clothes, as well as his love for the 18th century,  Historicism drew inspiration from the splendor of Versailles. Usually, when thinking of world famous designers, 18th-century gowns do not cross my mind. Of the outfits displayed in this room, some included more non-traditional styles such as strapless pieces and bigger gowns. One of the gowns that struck me the most was the Look 43 Coat-Dress, which was not designed by Dior, but one of his mentees in 2005. Many of the pieces seen were mentees of Dior, instead of his work. It was an inspiring piece due to the intricate stitching around the collar and down the skirt.

Dior travelled a lot, and it made a considerable impression on him, as well as the other designers at House of Dior. The exhibition highlighted the effects of the designers’ travels to China, Egypt, Mexico and India. These inspirations were boldly exhibited in the Travel section. It was in this part of the exhibition where pieces were made by Dior’s successors to show the similarities and differences in their designing style. One of the most memorable was the Escaramuza Ensemble Dress designed by Grazia Chiuri. Featuring the Christian Dior label on the sash and skirt, this outfit is unlike the others and caught my attention. It was the first to fashion the designer’s name on the piece, suggesting it was created more recently.

My favorite room, The Garden, was inspired by Dior’s work to be more floral and brighter, using flowers as a source of imagery. The entire room was decorated like a scene from Alice in Wonderland, creating a more childlike and fantastical appearance than the other rooms.

Overall, the entire exhibition was dazzling and quite an experience to be had. It is definitely recommended for any person who loves fashion and wants to learn about the legacy of Christian Dior, or anyone who wants to go to a fun exhibit on a lazy Sunday afternoon.