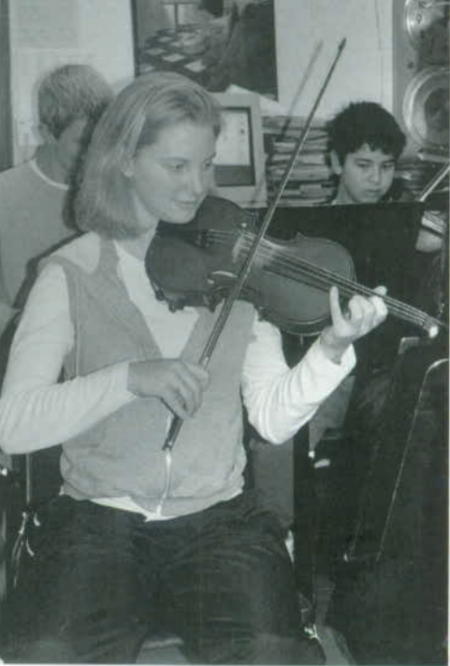 Emily Wasley (’00) will be the commencement speaker at High School Graduation on June 8. Wasley is excited to be standing with the Class of 2019 and “the students of the future.” Like many students at ASL, Wasley grew up in London, despite keeping her heavy American accent. Wasley’s parents taught at the school before she was old enough to attend classes. “My mom tells this really funny story of my first day of kindergarten where I got into really big trouble because I [redirected my class],” she said. “I was so excited; [I thought] ‘Oh, this is my home I know where to go!’ and I didn’t tell the teacher and all of a sudden all of her students were gone.”

When recognizing the opportunities ASL provided her, she realizes that none of it would have been possible if it weren’t for her parents being teachers. “Because my parents were teachers, my sister and I were given financial aid and I don’t think we would have been able to come to ASL if we hadn’t had that,” she said.

A pivotal time for Wasley was her senior year Ecology trip to the Imfolozi Game Reserve and Drakensberg Mountains in South Africa. “As a kid, I was always a tomboy and was a big rock collector, so I knew I had a fondness for the environment. But it wasn’t until my senior year of high school where I went with [Science Teacher Bill Kenney’s] ecology class to South Africa for two weeks,” she said. “[This] launched me into my love for protecting the environment and making sure that the resources that we do have are preserved.”

After graduating, Wasley attended Hamilton College and majored in public policy and environmental studies. Wasley said she really got interested in “brownfield redevelopment,” which is cleaning up previously contaminated land that can then be reused for other purposes depending how much of the land can be restored.

When Wasley graduated college, she didn’t have a job but moved to the Washington D.C. area in order to get a job in the environmental policy field. Wasley moved in with friends from college and got a job working on “phase-1 and phase-2 environmental side assessment,” which is similar to brownfield development.

While she was at her job, she was simultaneously looking to attend a graduate school. “While I was there I did some research into grad school and was thinking that [the company] could pay for [a portion of it] because I didn’t have much money at all,” she said. “I ended up getting into [George Washington University], so I was going to night school while consulting during the day,”

Another significant moment in Wasley’s life was actively trying to save the planet through an opportunity presented by a professor. “During grad school, one of my professors recruited me to work with him at his transportation [and] land use planning firm, which was fun because I got a different perspective from ‘land use’ clean up [and] how to develop communities that have access to [various forms of] transportation,” she said. The land planning firm essentially looks at how to use land in the best way possible in order to build new infrastructure.

Wasley started working at the company Booz Allen Hamilton Holding Corporation to help the U.S. Environmental Protection Agency track data on its usage of resources like water, energy, recycling and green purchasing.  While at Booz Allen, given their pretty significant consulting support, Wasley said they have expertise in ‘wargaming’.” Wargaming is the company’s way of opening a discussion up for people to look at potential futures, and how to prepare for those potential futures. Wasley said that wargaming is traditionally used for wars and threats to national security, so she adapted this practice to look at the nation security implications of climate change.  These potential futures are hypothetical situations in which they predict environmental effects and how they can problem solve early on.

This set Wasley on a pathway, which allowed her to investigate climate related risks as well as finding ways to adapt to the changing climate.

Then, Wasley was recruited to work for the U.S. Global Change Research Project in the White House, which is made up of 13 teams, primarily science based agencies.

Within this role, she was hired to be the Adaptation Science Lead, which was basically the science-policy translator between the science agencies who were less familiar with how climate change was going to affect their facilities, operations, supply chains and communities and with the climate science communities who were developing the science.

This job stood out to Wasley, who had a great experience with her role. “This was probably the most fun I had on a job because it was connecting the communities with the climate work, which I really love,” she said. The reason she liked is because she said she used the best available science to inform hypothetical futures. An example of a hypothetical situation could be if Texas was hit by a hurricane. If this hurricane left the state in a considerable drought, more migration would occur. They would see what the cascading effects that could potentially happen were and how they could prepare for those situations.

Wasley’s work with communities affected by environmental disasters lead her to the idea of personal resilience and how to persevere in the face of adversity. She also strives towards understanding how people can thrive in times of uncertainty and what are the traits that people have from other experiences that allow them to get through difficult situations. “With a lot of the impacts that we’re facing like the wildfires in California or the mudslides and hurricanes [along] the gulf coast, there are a lot of people suffering from climate trauma,” she said. This trauma can from losing their homes, their jobs or their family members, but, she said that if they have services provided to them or they have a tight-knit community and they have family close by, it tends to be those folks who are able to make it through the trauma they have endured.

Around two weeks after the 2016 U.S. Presidential Election, Wasley said she was worried about her job security if the Trump administration were to not invest in any climate related projects or infrastructure changes. This led Wasley into becoming a pilates instructor to have as a backup job just in case she ended up without one. “I now teach pilates, which is a wonderful release to not have to think about politics or work, I just get to be there helping out others and connecting with people,” she said.

Wasley’s biggest challenge used to be the political struggles, but now she feels that there are so many people voicing their concerns about climate change because more people understand that the impacts are already happening.

Currently, Wasley said that the biggest challenge she faces is working to have people invest in solving more long term problems rather than just investing in solutions that’ll be helpful for six months to three years.

Despite the destructiveness of climate change, Wasley recognizes that “the fact that climate change forces us to work collaboratively and across so many different disciplines and at various scales is what I really love about my work,” she said. “Getting to connect with so many different people while working is the best part of my job.”