Rethinking how we approach societal change 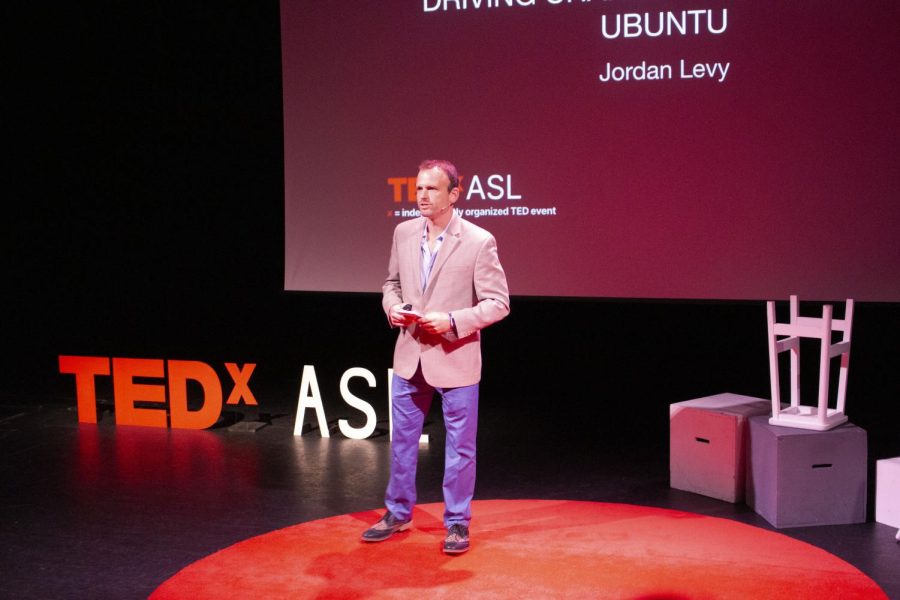 Jordan Levy speaks to the high school during the TEDxASL conference. He spoke about his experience with Ubuntu Pathways, a nonprofit organization who helps impoverished communities in South Africa.

My main takeaway from the TEDxASL conference Sept. 24 was a mental dilemma. After the TEDx conference, I felt inspired, intrigued, and conflicted. The point of the conference was to focus on change. The theme was “The Times, They Are A Changin,’” and many different speakers told stories about their experience enacting change.

The whole theme of the introduction to the conference was about youth entering the world and having the chance to inspire change.

It is undoubtedly true that our voice as the youth of the world is growing. With the rise of social media, issues spread and people join together in ways that weren’t possible prior to the growth of the internet.

Monday, Sept. 23, just a day before the conference, Greta Thunberg, a 16-year-old from Sweden, spoke to the U.N. Climate Summit Sept. 23. She was an exact demonstration of the power of the youth in today’s society, exactly what the TEDx conference illustrated to me.

When reflecting on the conference, I was always relating Thunberg’s speech to how the different speakers addressed their experiences with societal change. For me, the way she went about it hindered our ability to make progress.

After watching her speech her tone really stuck out to me. She said “People are suffering. People are dying. Entire ecosystems are collapsing. We are in the beginning of a mass extinction, and all you can talk about is money and fairy tales of eternal economic growth. How dare you?” she went on to say “how dare you” three more different times during her short speech.

The general statement of her address is sensational. She’s standing up for our generation and our future. However, whether it’s her actual opinion or just her rhetorical strategies, I worry it has moved us in the wrong direction. By shaming previous generations, wide-scale societal issues and categorizing these issues in an ambiguous way, it doesn’t provide a framework for actual change. She lost productivity in her radical strategy.

This approach was also taken by Giacomo Manca di Villahermosa, a climate-activist and member of the group Extinction Rebellion, at the TEDx conference. He shamed the current stereotypical goals of an adult to create a life and livelihood for themselves. He connected how having a financial job, a family and then moving to the suburbs is destroying our future and planet.

The whole concept of shaming ambiguously isn’t the right way to make change. This reproach of a common stereotype turns people against each other. By sticking to such a dramatic ideal against a common livelihood, particularly with the demographics of the viewers of the conference, he’s turning this issue into a battle. Also, these people he’s demonizing are likely the ones to be effective in the change he wants to see take place. Thunberg missed on this too. There is no reason to demonize people who currently have the power to make change.

Rather, Jordan Levy, who spoke about his work with nonprofit organization Ubuntu Pathways, identified real proven ways to make change. He spoke about how change is a continuous process, stressing the importance of relationships to support the difficulties that can come through charitable work. When he mentioned his work with seriously impoverished areas of South Africa, he never shamed the fact that apartheid existed, or accused the government of letting people live this way. He simply identified the issue and worked to better it.

Similarly, Michaela Lavi (’21) spoke about encouraging hope in times of turmoil. She started off her TEDx talk remarking on how she was called a terrorist for merely being Israeli. This literally reinforces the statement that the large-scale youth are missing. She felt attacked and felt no sympathy towards the person who called her that or the Palestinian regime. She went on to discuss how she felt being in Israel with her hands overhead, lying on the ground while missiles exploded in the air above her. It was only at this moment that she realized the connection to the other side of the conflict. She said that while she was witnessing missiles fly above her head, she thought of all the Palestinians who were doing the same thing.

Then, Lavi spoke about a summer camp called Seeds of Peace. Here, she engaged in dialogue with people who were both Palestinian and Israeli. Her overarching message was reinforcing the power of relationships and dialogue in developing hope and striving for change.

Lavi clearly identified how to correctly inspire and cultivate change. She showed from experience the paralyzing power of hate, and instead, she described the useful power of relationships and connection.

Simply put, as a generation, we must fix our approach to change. We must strive to work together with those in power, or simply other individuals, to develop connections to meaningfully impact the world. Instead of shaming, it must be productive, focused ideas and dialogue in order to better society. We must plan, try, adapt and try again. Let’s use our voice to cultivate a team effort, rather than a battle.