Students travel in London with alternative groups to bond, prepare for trip 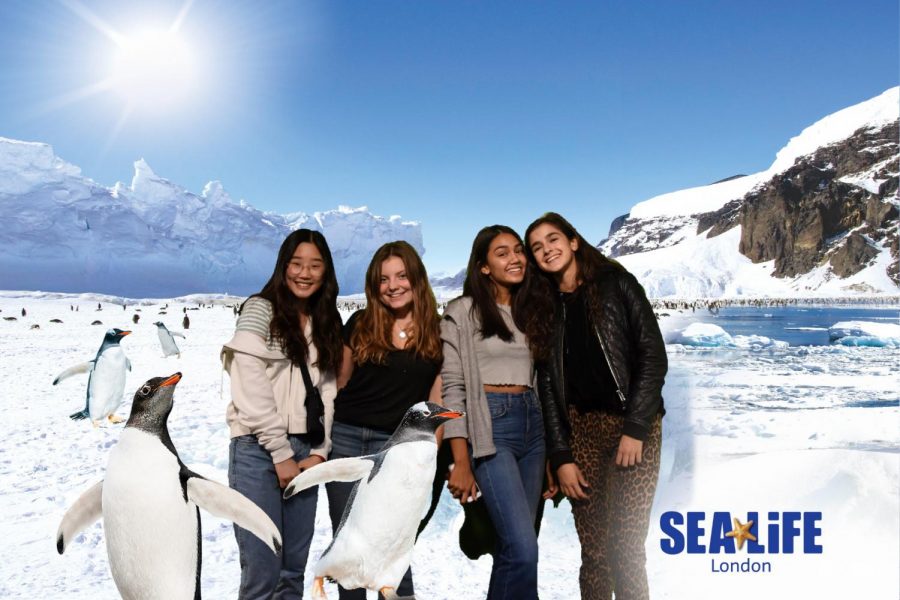 Amber Auh ('21), Solenne Jackson ('21), Helena Hansen ('21), and Amelia Learner ('21) (left to right) pose with the animated backdrop at Sea Life Centre London Aquarium. They're on the alternative called "No Substitute for Water" that went to see the aquarium in preparation for their trip in March.

Students visited various places around London on the afternoon of Friday, Sept. 27 to prepare for their alternative experiences in March. These activities ranged from looking at street art in Brick Lane, traveling to aquariums, to engaging in a yoga class.

The new timing of the alternative program with the addition of more group bonding fulfills one of the aims of the alternatives program, which, according to ASL’s website, is to “nurture relationships and build a community.”

For Ethan Otero (’21), participating in the half-day alternatives allowed him to get to know his group better. Otero is part of the Cracking the Code alternative and traveled to the Science Museum to visit the “Top Secret: From Ciphers to Cybersecurity” exhibit. “Most of the time, we did activities with code-breaking, though I did the activities with people I had just met…I was able to meet new people and get along with old friends,” he said.

Similarly, Mona Marouf (’21) said that the half-day allowed her to become friends with people in her group. Marouf is a part of the Measure of All Things: Renaissance Art & Science, and is traveling to Florence in March to look at art and science. In preparation, they traveled to The Wallace Collection to look at art made during the Renaissance.

The highlight of Marouf’s trip was meeting new people as they were able to “discuss what was going on in their lives at a stressful time. It was nice to take a break,” she said.

Moreover, for Otero, though the half-day didn’t adequately prepare him for the actual alternative, making friends made him feel more comfortable with his group.

In contrast, Marouf said that the excursion prepared her for future alternative days, as the experience “mirrored what they will do when in Italy,” she said.