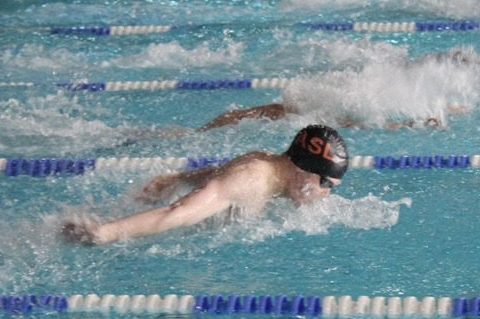 Jackson Olin ('20) performs the butterfly for ASL during a swim meet. Olin will be a part of the swim and dive team at Boston University.

Competitive swimming always has been a part of Jackson Olin’s (’20) life. Now, his swimming career is continuing at Boston University after committing on Sept. 29.

After having a list of schools, Olin decided on Boston University because he wanted a swim program where he could be an impactful member of the team and also be at a great academic school.  “I wanted to be a big fish in a little pond and then go to a good school as well,” he said.

In early September, Olin went on an official visit to Boston University and realized that it was the school for him. He met the whole team and some of the other commits that were considering Boston University. “Within a day, I had like 50 new followers of every single person I met, which was pretty crazy,” he said. “I really liked everybody there, including the recruits, which is a huge reason why I committed.”