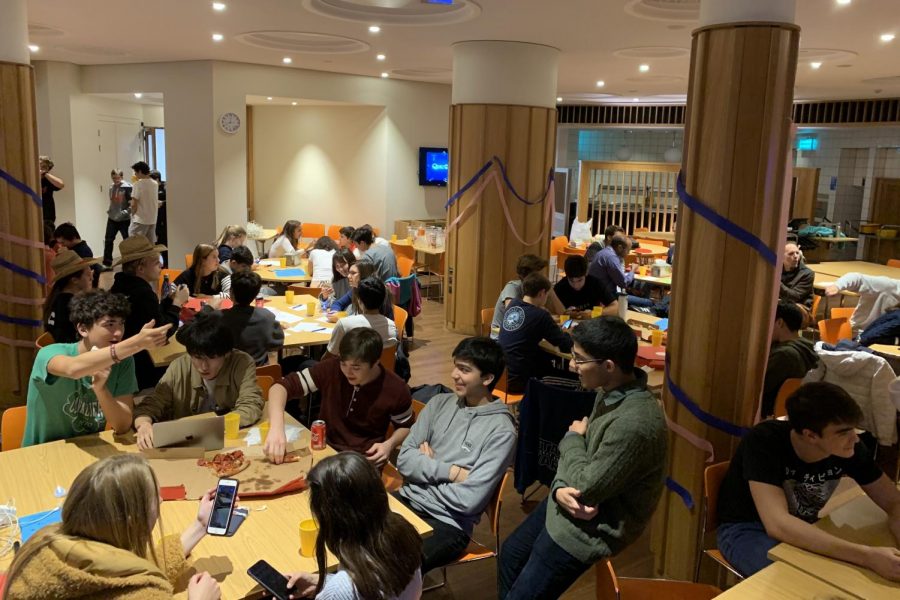 Student teams discuss possible answers to a quiz question. The Quiz Night event occurred Oct. 4. It was organized by the Student Council and run by outside contractor QuizQuizQuiz.

The annual High School Quiz Night was held Oct. 4, planned by the Student Council. This was the second time the event was run, after being piloted in fall last year.

Quiz Night was organized by the Student Council and run by an outside company called QuizQuizQuiz. Approximately 75 students participated in the event. The winning team was awarded a set of Starbucks gift cards as a prize.

Student Council Advisor Tony Bracht thought that the event went well. “The Quiz Night was really fun for the students and the teachers that participated,” he said. “I liked… the enthusiasm and the energy of the student body. They all seemed to be engaged and having a good time.”

AJ Laurienti (’21), whose team won the quiz, especially liked the format of the night. “I really liked the variety of questions they gave to us,” he said.

Bracht noted some potential for further improvement for next year’s event. “I would love to see a larger group there, since we have the capacity for 20 teams, and we [only] had 10 teams,” he said.

The timing of the event created some problems with organizing the event. “It’s always tricky to find a time in the calendar that can maximize the participation of students,” Bracht said. He further referenced sports commitments and the SAT that occurred the next day as potentially causing a more depressed turnout.

Laurienti was pleasantly surprised by his team’s victory, and had a good experience with the quiz night. “I really enjoyed that experience.”