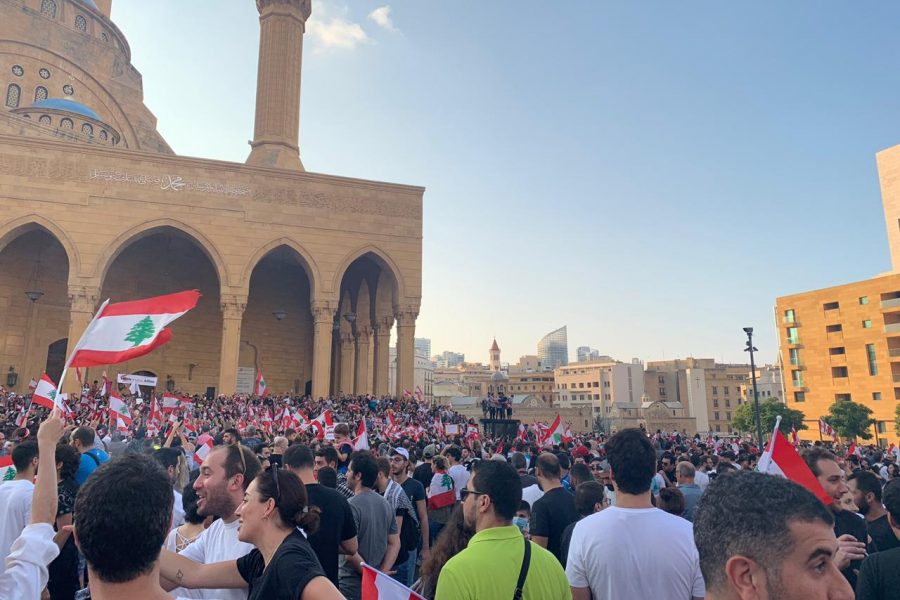 Citizens gather in front of Mohammed Al Almin Mosque in Beirut, Lebanon. Those connected to the country have been protesting daily all over the world since the original protests started Oct. 17.

Following the introduction of a tax on the use of WhatsApp calls, the majority of Lebanese citizens took to the streets Thursday, Oct. 17, to protest. Although the government immediately repealed the tax, the protests soon turned from a simple financial-based protest, to an ongoing anti-government revolt.

It is now the eighth day of anti-government protests in Lebanon, yet the country is not the only location of this uprising. All across the world over the weekend of Oct.19, millions of Lebanese citizens living abroad took to the streets near their embassies to show support for those back home.

Tiala Bassatne (’20) joined her mother and cousin to protest outside the Lebanese embassy on Saturday, Oct. 19. Members of her own family have been protesting in Lebanon throughout the past week as well.

She said it is imperative to show support for those protesting in Lebanon at the moment.

“Even though I have never lived in Lebanon, I consider it my home and will always stand in solidarity with my people, no matter how far away I am,” she said.

Bassatne said that she believes that the protests have deteriorated from the initial fight against the WhatsApp tax to a multitude of other injustices the Lebanese people face. She said that protesters are looking for their guarantee to freedom of speech, funding for education, sufficient resources including water and electricity, higher salaries, and environmental attention.

“Our biggest demand is for the corruption to end and for mandatory elections to be held before the end of the year,” she said.

To move the country on, Bassatne said that there must be a total reform in the government structure.

“Unless a miracle happens and our politicians become concerned for the nation and not just themselves for once, then, there needs to be a complete reform in government. she said. “Whether that be changing the current policies and systems of governance, or most importantly, who’s in charge,”

If Bassatne were able to say one thing to the Lebanese government at this moment in time, she said she would tell them to “Get your s— together or get out. I would say ‘excuse the language,’ but there is simply no other way to put it.”

Bassatne said she believes that the protests must continue unless concrete change is made.

To the protestors and to the Lebanese who wish to see changes in their country, she would say to them, “At the end of the day, we are one country, one people, and I love you all. We cannot give up.”