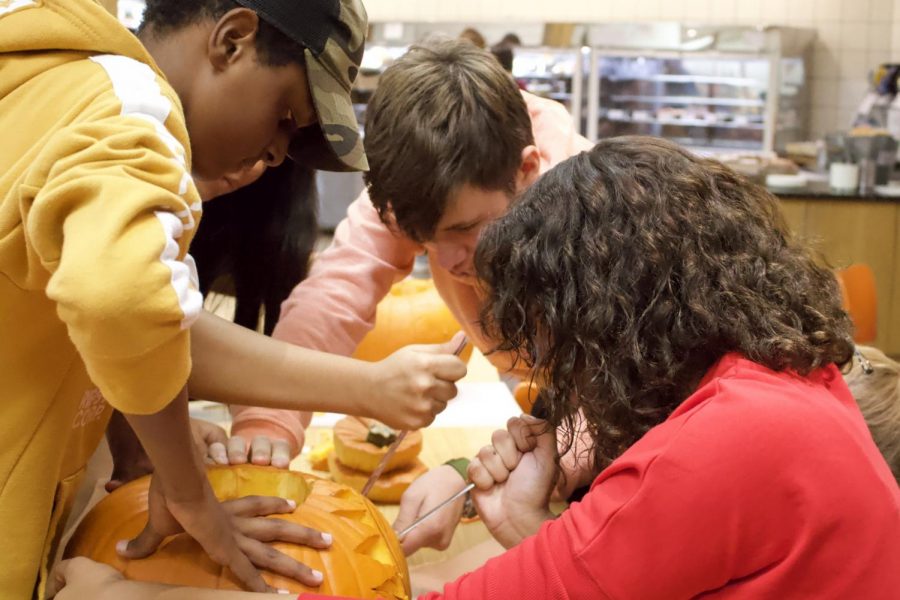 Ninth grade students from the Pringle advisory work on carving their own unique design into a pumpkin for the Halloween pumpkin carving contest Oct. 29. The pumpkins are on display at the table in Top Orange, and the winner will be announced Thursday, Oct. 31.

Students in Grade 9 carved pumpkins in the spirit of Halloween during conference time Oct 29.

Working in advisory groups, students had the chance to bond over an activity that celebrates an American tradition.

Students had to come up with creative designs together for their pumpkins and carve them in twenty minutes. Advisories competed against each other in the hope of winning the privilege to have open-campus one week earlier than the other freshmen advisories.

Dolma Lama (’23) found the pumpkin carving engaging, even though she had never done it with her friends before.

“Pumpkin carving was something very new to us and everyone had a great time with their advisory,” Lama said.

“We hit some bumps in the road, but overall we managed to achieve our goals of getting the freshman advisories to bond together,” he said.

Currently, the carved pumpkins are on display at the table in Top Orange, and a poll was sent out to the high school to elect a winner.

The winner will be announced Thursday, Oct. 31.