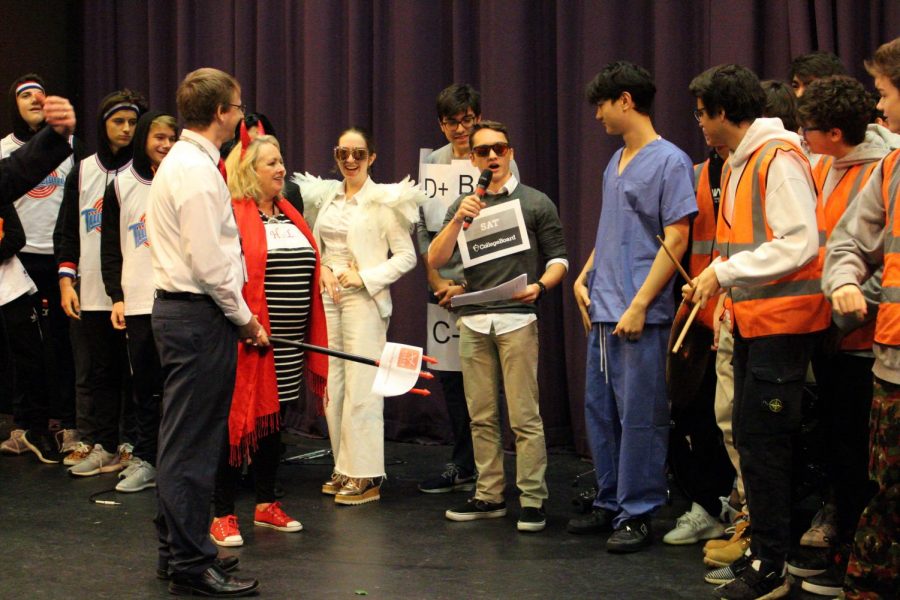 Pete Grieg ('20) speaks in front of the crowd during the Halloween assembly. Grieg dressed up as the AP exams that were lost by College Board earlier this school year.

The High School Halloween assembly took place in the School Center on Oct 31. The assembly started with a scare cam recording, which was followed by a Brooklyn Nine-Nine-themed video, put together by the Senior class of 2020.

Elena Stathopoulos (‘21), who was a member of the audience, spoke highly of the assembly.

“I think that the competition that they always do is fun, as you get to hear from people that you might not have necessarily heard from before,” said Stathopoulos.

Stathopoulos also said that she “thought that the assembly was really fun and was able to bring different grades together.”

To conclude the assembly, the student band Out of Commission performed two pieces and Eli Anderson (‘22) played his original song, “Cigarette Butts.”

“It was really exciting cause whenever I perform my heart beats really fast and I get really nervous, but in the end, it’s what I live for. I love it,” Anderson said.

“I liked how behind me there was apparently, I didn’t realize, some lighting there,” he said. “It was in the background.”

Throughout the entire assembly, the audience was cheering, laughing, and clapping.

However, Darren Morris (‘23), Student Council representative believes that the assembly did not go exactly as planned.

“We didn’t prepare as early for the assembly as we would have liked. I think it would have gone a little smoother if we had started planning a few weeks before than we actually did,” he said.

Stathopoulos agreed with Morris on the organization of the assembly.

“I think that the transitions weren’t that smooth and there was a lot of time between the competition and when the band performed,” she said.

However, Morris felt that the assembly was an overall success.

“We thought it went pretty well,” he said.