Celebrities should be voice for social issues 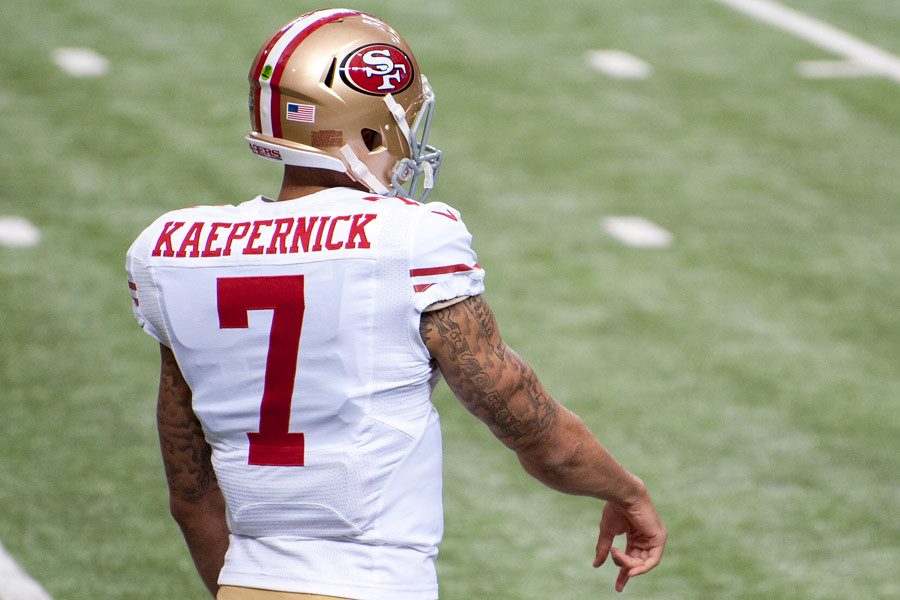 Colin Kaepernick is a leader in the movement against police brutality in the U.S. and kneeled during the national anthem of many football games in protest.

If just one celebrity endorsement can boost the sales of a company’s product by 4% almost immediately, according to Forbes magazine, how much awareness could be made with one post about a social cause? Or even an Instagram story?

Celebrities have huge groups of people following them on social media, so everything they say and do can be influential. Due to their large public following, celebrities, no matter their claim to fame, should be using their platform as a voice for social change and awareness, as staying silent and ignorant about social causes has harmful consequences.

In October, American singer Demi Lovato accepted a free trip to Israel. According to Rolling Stone Magazine, Lovato was reportedly paid $150,000 by the Ministry of Jerusalem Affairs to post content from the trip and be baptized in the River Jordan.

On her Instagram, Lovato described the trip as “… an amazing opportunity to visit the places in the Bible growing up” and wrote, “There is something absolutely magical about Israel.”

After, Lovato faced backlash from fans who claimed her posts were insensitive to Palestinians. Lovato did not address the Israel/Palestine conflict during her posts or after returning to America. The Israel-Palestine conflict is complex, as it originates from the two nations claiming the same land as their own.

In a since-deleted Instagram story, Lovato apologized to her fans..“No one told me there would be anything wrong with going [to Israel] or that I could possibly be offending anyone,” she wrote. “With that being said, I’m sorry if I hurt or offended anyone, that was not my intention. Sometimes people present you with opportunities and no one tells you the potential backlash you could face in return. This was meant to be a spiritual experience for me NOT A POLITICAL STATEMENT and now I realize it hurt people and for that I’m sorry.”

Although Lovato’s intentions weren’t to offend Palestinians and those who support them, her actions cannot be undone. Taking this trip alone was a political statement, no matter the motive behind it.

Additionally, if Lovato didn’t support Israel in any way, then she would not have traveled to the country.

On the contrary, Rapper Nicki Minaj was scheduled to travel to Saudi Arabia for a concert at Jeddah World Fest July 18. However, she pulled out of the show to support the rights of women, the LGBTQ+ community, and freedom of expression.

“After careful reflection, I have decided to no longer move forward with my scheduled concert at Jeddah World Fest. While I want nothing more than to bring my show to fans in Saudi Arabia, after better educating myself on the issues, I believe it is important for me to make clear my support for the rights of women, the LGBTQ community and freedom of expression,” Minaj said to the Associated Press.

In Saudi Arabia, gender segregation is heavily enforced in many public spaces. However, regulation of other practices has since become more flexible, such as women being permitted to drive and attend events in sports stadiums. But, homosexuality is still illegal with punishments of fines, torture, capital punishment, and life-time prison sentences.

Both Minaj’s fans and human rights organizations heavily praised her for speaking up against oppression in Saudi Arabia and showing solidarity with oppressed groups in the country. Thor Halvorssen, President of the Human Rights Foundation, said, “We are grateful to Nicki Minaj for her inspiring and thoughtful decision to reject the Saudi regime’s transparent attempt at using her for a public relations stunt.”

Not only do I agree with this statement, but Minaj’s refusal to perform in the country inadvertently increased awareness of the oppression of minority groups in Saudi Arabia.

Minaj’s withdrawal from the festival and statements about minorities in Saudi Arabia was widely discussed on social media and online news, which allowed people who were otherwise unaware of these issues to learn about them.

Also, personally, as a Nicki Minaj fan, I felt more respect for her as an artist and a person after finding this out because it shows she values people’s rights more than putting money in her pocket.

Although there is no clear evidence of Minaj’s actions having a direct impact on public opinion, there are plenty of examples of celebrities who have.

I’m writing this post about the upcoming midterm elections on November 6th, in which I’ll be voting in the state of Tennessee. In the past I’ve been reluctant to publicly voice my political opinions, but due to several events in my life and in the world in the past two years, I feel very differently about that now. I always have and always will cast my vote based on which candidate will protect and fight for the human rights I believe we all deserve in this country. I believe in the fight for LGBTQ rights, and that any form of discrimination based on sexual orientation or gender is WRONG. I believe that the systemic racism we still see in this country towards people of color is terrifying, sickening and prevalent. I cannot vote for someone who will not be willing to fight for dignity for ALL Americans, no matter their skin color, gender or who they love. Running for Senate in the state of Tennessee is a woman named Marsha Blackburn. As much as I have in the past and would like to continue voting for women in office, I cannot support Marsha Blackburn. Her voting record in Congress appalls and terrifies me. She voted against equal pay for women. She voted against the Reauthorization of the Violence Against Women Act, which attempts to protect women from domestic violence, stalking, and date rape. She believes businesses have a right to refuse service to gay couples. She also believes they should not have the right to marry. These are not MY Tennessee values. I will be voting for Phil Bredesen for Senate and Jim Cooper for House of Representatives. Please, please educate yourself on the candidates running in your state and vote based on who most closely represents your values. For a lot of us, we may never find a candidate or party with whom we agree 100% on every issue, but we have to vote anyway. So many intelligent, thoughtful, self-possessed people have turned 18 in the past two years and now have the right and privilege to make their vote count. But first you need to register, which is quick and easy to do. October 9th is the LAST DAY to register to vote in the state of TN. Go to vote.org and you can find all the info. Happy Voting! ???

Through an Instagram post, she encouraged her 112 million Instagram followers to educate themselves on the candidates running in their state and vote for a candidate who most closely represents their values. “For a lot of us, we may never find a candidate or party with whom we agree 100% on every issue, but we have to vote anyway,” she wrote.

In the 24 hours after her post, voter registration across the United States spiked, and 65,000 people registered to vote, according to the Guardian.

This clearly shows the impact one celebrity had on the elections, as although not all of the 65,000 people would have been Taylor Swift fans or followers, it is impossible to deny how impactful her voice was.

The list continues, from American football player Colin Kaepernick kneeling during the national anthem to protest racism and police brutality in the U.S. to media personality Kim Kardashian taking a law apprenticeship, meeting with President Trump to discuss prison reform and assisting with the release of wrongfully convicted individuals from prison.

With that in mind, we shouldn’t ignore the professionals who dedicate their lives and careers to social issues I have listed in this article, or ones similar, and solely depend on celebrities as a voice. However, public figures need to utilize their platforms as their wider audiences provide them with the opportunity to educate, motivate, and inspire large numbers of people.