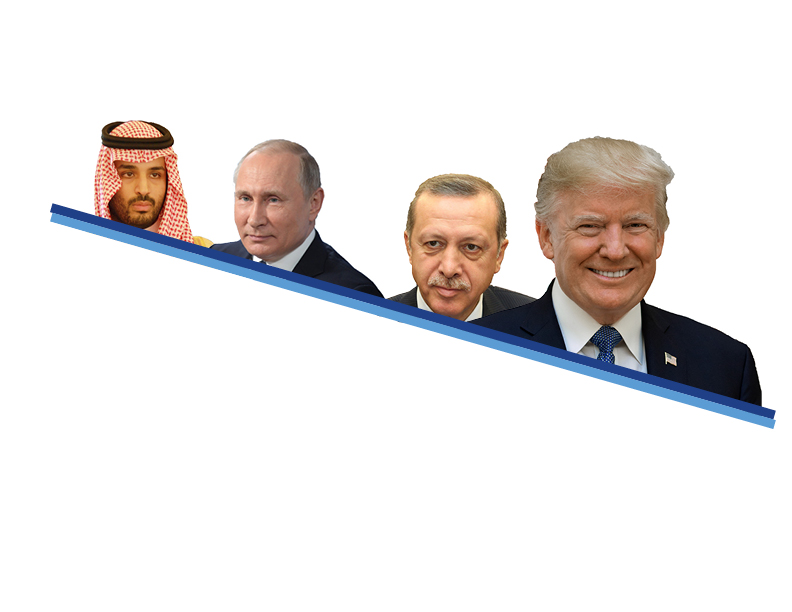 While many presidents have met and negotiated with tyrants, predominantly in the hopes of ceasing their destructive actions, and bridging the divide between them and the global community, Trump has done all but that. (Photos used with permission from (left to right): Wikimedia Commons, Kremlin.ru, The Cancellery of the Senate of Poland, White House)

While many presidents have met and negotiated with tyrants, predominantly in the hopes of ceasing their destructive actions, and bridging the divide between them and the global community, Trump has done all but that.

Photos used with permission from (left to right): Wikimedia Commons, Kremlin.ru, The Cancellery of the Senate of Poland, White House

Though he is a controversial figure in American politics, one thing about President Donald Trump that is indisputable for Democrats, Republicans and Independents alike is the unorthodox manner in which he conducts himself. This appears in the way he communicates information, the people he surrounds himself with and, most prominently, how he approaches foreign policy.

The principles that govern his strategy on the global stage have baffled both his staunchest critics and most loyal supporters. Not only has Trump chosen to bash and betray our closest allies, such as the Kurds in Northern Syria, but he has openly and enthusiastically embraced autocrats around the world.

While many presidents have met and negotiated with tyrants, predominantly in the hopes of ceasing their destructive actions, and bridging the divide between them and the global community, Trump has done all but that. He has instead validated their presence and sought to appease them through both rhetoric and policy, often at the expense of either American or European interests.

The young Saudi prince, who inherited power from his father in 2017, has drawn international condemnation for propping up a brutal civil war in Yemen that has led to mass famine and murdering Jamal Khashoggi, a journalist critical of his rule. However, Trump’s admiration for Mohammad Bin Salman (MBS) couldn’t be more obvious.

In the two years since assuming his presidency, he has gifted Saudi Arabia nearly every strategic goal it had been hoping to obtain. He has instructed the Department of Defense to provide logistical and military support for the country’s horrific and ruthless conflict in Yemen, where U.S.-made weapons have been used to target schools and hospitals.

Trump’s decision to pull the U.S. out of the Joint Comprehensive Plan of Action, designed to prevent Iran from acquiring a nuclear weapon, appeased radical factions within the Saudi Arabian government. This has sparked further unrest and violence in the region.

Perhaps most strikingly, Trump was MBS’ sole defender when it was revealed that MBS ordered Khashoggi’s violent execution at the Saudi Arabian consulate in Turkey. When a bipartisan group in Congress attempted to block further military assistance to Saudi Arabia, citing this murder and a host of other atrocities committed in Yemen, Trump vetoed the bill, standing alone in his defense of the Saudi  Arabian leader.

The long-standing president of Russia, though isolated by the majority of western politicians in Europe, has seemingly forged an ally with one man: Trump. In just three years, the president has, either through malice or his own incompetence, overwhelmingly advanced the foreign policy interests of America’s greatest geopolitical foe.

He has openly bashed NATO member countries, the military alliance designed to deter Russian aggression towards mainland Europe, for supposedly not paying their fair share in defense spending.

In a sharp break from U.S. policy, Trump even threatened to withdraw the U.S. from the treaty altogether, something Russia has craved ever since NATO’s foundation in 1949.

More recently, Trump’s seemingly erratic decision to withdraw U.S. troops from Syria, which went against the recommendations of diplomats, generals, and experts alike, has provided Russia with an opportunity to command a greater foothold within the Middle East.

Their military has begun to move troops into areas once held by U.S.-backed Kurds, who have been driven from the region. This will create space for their Iranian and Syrian-government allies to occupy this land, further splintering hopes of a democratic, unified country.

Throughout his term, Trump has shown himself to be incredibly submissive to the President of Turkey, particularly with regard to the U.S.’s Middle East policy.

Though Turkey is a member of NATO, Erdogan has increasingly grown fond of warmer relations with Russia, the alliance’s main adversary. Turkey’s military has increased its cooperation with that of Putin’s, conducting joint patrols of Syria, and rebuffed the U.S. by purchasing large orders of Russian fighter jets and weaponry.

Trump, however, is indifferent towards the drift of Turkey, both militarily and politically, towards Russia. His removal of troops from Northern Syria allowed their military to ransack once-democratic Kurdish regions, torturing and killing prominent political figures.

Through a destructive and illiberal foreign policy that harms allies and embraces autocrats, Trump has weakened America’s standing on the global stage. His presence has given autocrats free rein to continue their undemocratic behavior, as American global leadership that once condemned them has now run astray.