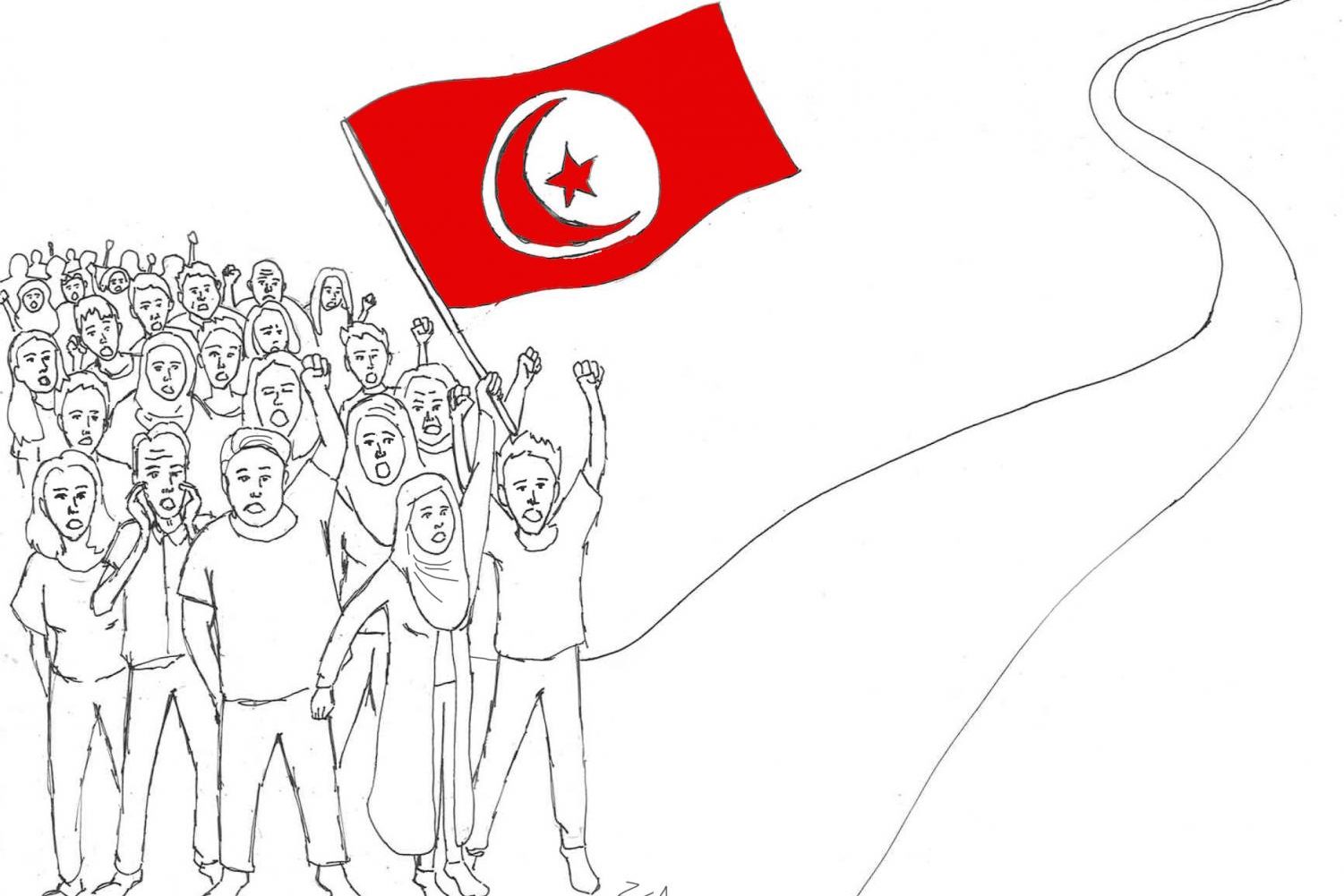 Nine years on from the Arab Spring, its initiator, Tunisia, is the only country that has emerged as democratic. The country’s path to democracy has been flawed, yet remains a strong example for nations in the region. (Illustration by Zainab Shafqat Adil)

Nine years on from the Arab Spring, its initiator, Tunisia, is the only country that has emerged as democratic. The country’s path to democracy has been flawed, yet remains a strong example for nations in the region.

Tunisia must remain on democratic path

It’s been nine years since Tunisian citizens uprooted their oppressive government and began the series of pro-democracy revolts that became known as The Arab Spring.

On Dec. 17, 2010, when fruit vendor Mohamed Bouazizi self-immolated following harassment from police, he became a symbol for the excessive force used by the government, and the lack of citizens’ freedoms.

This catalyzed the protests which focused on ousting President Zine El Abidine Ben Ali for his autocratic rule, and in just two months, he fled the country. Tunisia subsequently created an uproar for democracy that reached neighboring countries. Protesters in Egypt, Syria, Libya and more followed in suit and challenged authoritarianism in Northern Africa and the Middle East.

Initially, the possibility of taking power from corrupt autocrats and giving it to the people seemed possible.

However, nine years on, Tunisia is the only nation that has emerged as democratic.

Its Arab Spring counterparts are engulfed in a variety of precarious conditions, including civil war, a return to dictatorial rule,  and general instability.

Despite this, Tunisia is in its formative years of establishing a government that aims to abide by democratic ideals.

As a result of The Arab Spring, the  country held its first democratic elections to form a constituent assembly in 2011.

Since then, the country has continued to exercise practices of a democracy. Restrictions on speech and excessive use of police force has diminished. In 2014, a constitution was adopted.

From Tunisia’s initial independence in 1956 until 2011, there were only two presidents. Just last month, Kais Saed was sworn in as the new president of Tunisia, the second since The Arab Spring.

Tunisia’s current success is imperative to sustain the long term possibility of democracy in the region.

The Oct. 23 election resulted in a 72.3% of the vote in favor of Saed, a retired professor who has no previous political experience.

Saed, a self-described independent, played off the socio-political climate by running on an anti-corruption campaign that garnered support from youth who became disillusioned with Ben Ali’s crooked ways.

Saed’s commitment to diplomacy and improving the economy managed to get him the presidency.

However, he now has the responsibility of actually reforming the country.

The future of this young democracy is contingent on the growth of the economy.

However, unemployment rates have remained consistently around 15% since the initial spike up to 19% during The Arab Spring, per CEIC data.

While oppressive, Ben Ali’s government provided strong economic reforms that caused Tunisia’s GDP to triple from 1986 to 2008, per the United Nations. It is essential that the citizens do not become disillusioned with the initial effects of the revolution on the economy.

Kais Saed now has the responsibility of actually reforming the country. ”

Given its fragile state, validation from other democratic nations would benefit Tunisia.

On Oct. 29, The European Council passed a movement that gave Tunisia the Partner for Local Democracy status. This special status creates a platform for the EU to work with Tunisia’s government to facilitate a strong, committed shift to democracy.

In an area where some countries are in civil unrest, Tunisia could model a successful transition and become a stronghold for democracy.

As politicians work toward solidifying parliamentary practices, public opinion must not wane. While oppressive, the presidency of Ben Ali offered stability. Yet, Ben Ali also committed various human rights abuses and remained in office for over three decades. To condemn autocratic leaders, it is essential that the democratic leaders succeed.

While students in London may overlook the relevance of Tunisia’s government, I encourage people to see the means of connection. Tunisia’s youth swayed the vote in favor of Saed.

As I grow older, I hope to see my peers think about the importance of exercising the democratic freedoms we have.

According to The Economist’s Democracy Index, Tunisia is a flawed democracy. If successful, Saed’s presidency will weigh heavily on the country’s future. The people have made their way onto a path toward more democracy. Now, as the country embraces change, sight of the end goal must not falter.