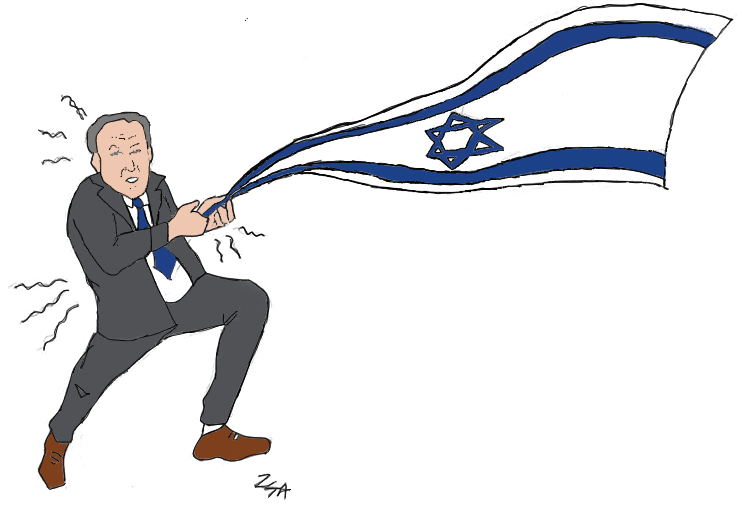 Israeli Prime Minister Benjamin Netanyahu has been in office since 2009, and previously held the position from 1996 to 1999. Netanyahu is currently under investigation for corruption and fraud. (llustration by Zainab Shafqat Adil)

Throughout her time living in Tel-Aviv, Israel, it was apparent to Daya Benami (’20) that she was living in “a country at war.” She recalls being in a park with her mother in 2014 when a bomb siren went off and they had to take cover.

“You lie on the ground and you hear the Iron Dome hitting,” Benami said. “In Israel, every house has a bomb shelter and you kind of have to be prepared for anything.”

Benami said during Netanyahu’s time as prime minister, Israel has been “moving further and further away from democracy.”

“In terms of basic rights of expression, almost every single newspaper is either censored or owned by the government,” Benami said. “I definitely think it is a militant state.”

On the other hand, Israeli student Laura  De Beer (’20) said that he has promoted extensive economic growth. According to HAARETZ, under Netanyahu’s leadership, the GDP has risen an average of 3%, the national debt has fallen by 60%, and unemployment is at a record low.

“Netanyahu has a lot to be proud of,” De Beer said. “He became Prime Minister when Israel was being crippled by the great recession. Ten years later, Israel’s economy is one of the world’s biggest.”

However, Liam Hamama (’20), who lived in Israel, the biggest issue with Netanyahu’s government has been its failure to promote peaceful negotiation between Israel and Palestine. Before Netanyahu was first elected in 1996, a peace treaty was close to being formed between the two countries.

When a country is in a situation of active conflict, democracy is definitely on the decline.”

“Netanyahu ended that [trety], which I think was entirely wrong,” Hamama said.

During the period between Netanyahu’s terms, Hamama said that Israel was once again close to having peace with Palestine, but, once re-elected, Netanyahu reinstated his stance.

“He’s expanded settlements and expanded human rights violations against Palestinians,” he said. “It has become less and less viable for Israel to ever have peace.”

Similarly, Benami said tensions between Israel and Palestine have worsened under Netanyahu. She emphasized a growing deprivation of Palestinian rights, especially in the Gaza Strip.

“Under his decade long [term] bilateral dialogue and movement towards peaceful negotiation with Palestine has diminished,” she said.

In contrast,  De Beer said she disagrees with the statement that Netanyahu does not promote peace in Israel. She said that in past discussions with Palestine, Israel has attempted to compromise but the Palestinians sometimes want more than what has been offered.

“Israel has given up a lot in these discussions. It’s just the other side [Palestine] sometimes will want more unfavorable things for Israel and will not accept a halfway mark,” de Beer said. “Overall, Netanyahu does promote democracy and that is something that in Palestinian lands they do not have.”

Although Netanyahu was re-elected in April 2019, he was unable to form a coalition, which has led to a series of subsequent elections. As he is under criminal investigation, Netanyahu is determined to hold onto power to avoid going to prion, which Benami sees as evidence that the system of democracy is “incredibly flawed.”

“[The elections] are a huge economic wound for Israel and even now it’s unclear who the prime minister is going to be. I think that puts the country in a lot of turmoil,” she said.

Hamama said that, by questioning the legal system and attempting to alter it to work in his favor, Netanyahu is bringing Israel further away from democracy.

“He is trying to argue that there is something fundamentally wrong with the legal system in Israel … which is entirely filled with people that he voted, so he is questioning a system that he supported in the past just because it is going after him,” Hamama said.

Also, he said the bigger issue in Israel is not the Prime Minister, but the public perspective on Palestine as a whole.

“The majority of people who vote in Israel are very right wing and they don’t believe in human rights for the Palestinian people,” he said. “Even if Netanyahu is replaced it’s not like the person who replaced him is suddenly going to want peace with the Palestinians and withdraw from the West Bank.”

For Benami, the Israeli-Palestinian conflict has been a catalyst for a deterioration of democracy in Israel.

“When a country is in a situation of active conflict democracy is definitely on the decline,” she said. “Democracy in Israel is definitely being sacrificed for the sake of fighting a war.”

However, De Beer views Israel as a “thriving democracy” citing the fact that a wide variety of backgrounds are represented in politics, including Arabs, orthodox Jews and liberals.

“What Netanyahu tries to do is to really bring Israel back into the international community,” De Beer said. “I think he definitely promotes democracy in Israel. If you look around the Middle East, Israel is the only democracy and that says a lot already.”