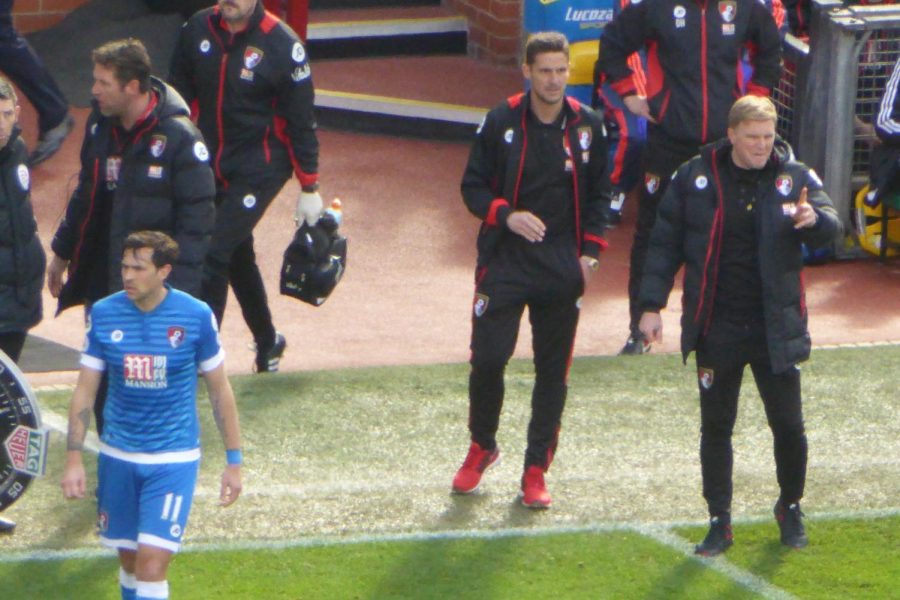 Eddie Howe (right), who is currently the manager of Bournemouth is a prospective manager for Manchester United. Bournemouth are currently in 7th place in the premier league.

The main problem for Manchester United is their current manager Ole Gunnar Solskjaer.

Out of the 50 games that Solskjaer has managed the club, he has lost 21. Compare this to Jurgen Klopp, who manages Liverpool – he has operated in 155 games and only lost 20 of those games so far.

Solskjaer should’ve been sacked from the club by now.

The only reason he has stayed is that he is a club legend. Having played for Manchester United in the 1990s into the early 2000s when they were one of the best teams in the world, Solskjaer has become a legend amongst fans at Old Trafford and the Manchester United community. But, he is losing respect from the fans because of his poor managerial performance.

Previous United Managers, such as Jose Mourinho and Louis Van Gaal, have had better success at this club than Solskjaer has. Both were given worse squads than what Solskjaer has now, yet they were still able to be successful.

A great example of this is the 2017/18 season under Mourinho, where United had a struggling squad with less star potential than the team of this year and still managed to finish in second place in the Premier League. If that is something Mourinho can do, why can’t Solskjaer?

Someone who is very much qualified and suited for the role of Manchester United Manager is Eddie Howe.

The current Bournemouth FC manager has been having recent success with the club. In his opening 11 games, he has led Bournemouth to four wins, four draws and three losses – putting them in 7th place in the table.

Since 2015, Howe has managed Bournemouth to be an established Premier League club. Every year they have been moving up in the table from 16th in his first season to 9th in the next season.

With Howe and Bournemouth, something that has been crucial to their success is their implementation of young English players.

Over the summer, United signed a pair of English defenders in Harry Maguire and Aaron Wan-Bissaka. With Solskjaer, United doesn’t have a system and tend to switch formations and tactics with every game, restricting the potential of these new players.

If Howe was brought in, he could put a philosophy of play into place by putting in tactics and formations.

With his recent success at Bournemouth, it seems like it would be seamless to integrate his style of play into this United squad and boost hopes again for the fans.

Another positive with the edition of Howe is the transition to the club. The Premier League is undoubtedly the hardest football league in the world. Every week is a new competition, and wins are never set before the game.

Take the Italian League, for example, there are three dominating forces in Inter Milan, Napoli, and Juventus, but besides those are teams who are unable to compete.

This year already, we have seen the small bottom half of the table teams in the Premier League take down the top tier teams. Norwich beat Manchester City 3-2, and Brighton beat Tottenham Hotspur 3-0.

The Premier League is more wild and spontaneous than other leagues.

Managers coming in from other leagues have been known to struggle with their team because of the more intense and physical nature of the Premier League. Howe would easily fit right in not just to the system of Manchester United but to the Premier League as a whole.

Howe would also embody the image of Manchester United.

The most exceptional manager of United and in the Premier League of all time was Sir Alex Ferguson. Coming into the role of the manager in 1986 and retiring in 2013, Sir Alex Ferguson won 36 trophies in those 26 years.

When he started managing the club, he was around 45 years old. Similar to Ferguson, Howe is 41 years old. Howe and Ferguson share the same charisma. Both are U.K. natives, starting their managerial career very young after a playing career, and are both British men who haven’t been around Manchester United in a very long time.

Howe would be the ideal manager for Manchester United in the future. He’s had early success with an upcoming team and has managerial experience in the Premier League. Howe carries the tactics and footballing philosophies to lead Manchester United better wins if they are to sack Ole Gunnar Solskjaer.