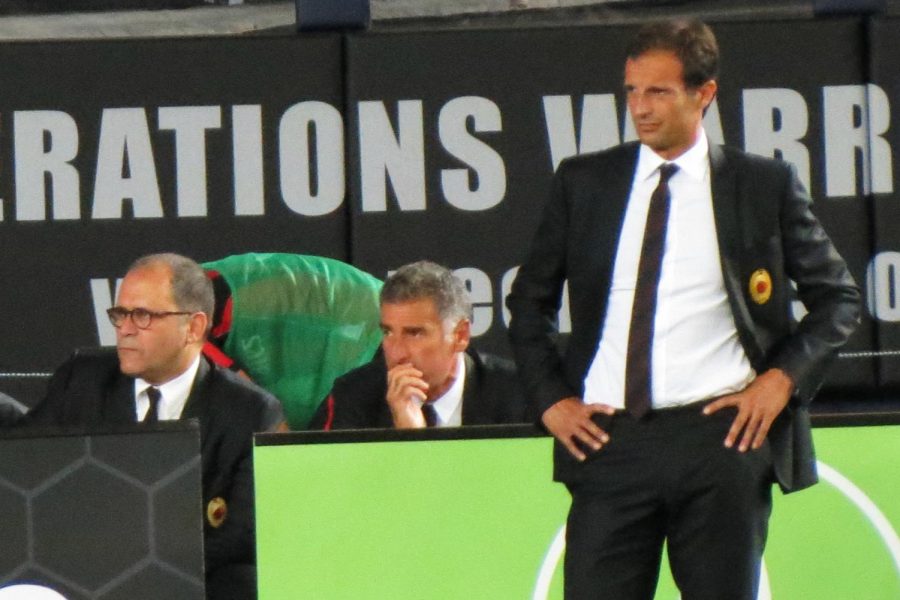 Massimiliano Allegri is another option to replace Ole Gunnar Solskjaer as Manchester United manager. He has managed AC Milan and Juventus FC previously.

Manchester United manager Ole Gunnar Solskjaer recently completed his 50th game as the team’s manager. The team suffered a disgraceful 1-0 loss against Bournemouth on Nov. 3. The loss is Solskjaer’s 21st loss at United, and it’s the clubs worst start to a Premier League season since 1988/1989.

The bad form has continued throughout Solskjaer’s time at United, and change is most definitely needed.

United need a manager who can control the team, read the opposition and place a strong structure into the side. No one fits this description more than Max Allegri.

The former Juventus manager won five straight titles for the Serie A side before resigning as manager. Not only does Allegri understand how to win at a big club, he was able to transform Juventus into playing world-class football.

United have not only struggled to win matches, but they’ve struggled to play quality football. Their playing has been slow, boring, and it seems the team has forgotten how to attack. Allegri is very tactically intelligent, which would be perfect for United.

All of Allegri’s former teams mastered the skill of keeping possession, which in the Premier League is really important. Bringing this possession-based football to Manchester United would allow the team to control their matches, which they haven’t been able to do under Ole.

Another reason why Allegri’s tactics fit United is because of his former teams’ ability to counter-attack. A counter-attack is when a team wins the ball back from a defensive position then attacks the opposing team quickly while they aren’t fully set up.

While at Juventus, Allegri used the counter-attack often and effectively to score goals. This counter-attacking style would fully suit United because they have players such as Daniel James, Marcus Rashford, and Anthony Martial have lots of pace and can beat their defenders with this ability.

Counter Attacking is the only thing that has worked this year. Therefore it wouldn’t make sense to take it out of the arsenal of attack. Allegri’s counter attack would perfectly fit United’s players.

The reason Eddie Howe shouldn’t be the United manager is quite simple; he isn’t ready for the job. Don’t get me wrong, I think Eddie Howe is an excellent manager, but he wouldn’t be good for Manchester United.

Howe has managed Burnley and Bournemouth, both small market and mid-table teams. Being the manager for Manchester United is one of the hardest jobs in the world because of all the pressure and all you have to endure. I fear that Eddie Howe’s lack of experience will come back to haunt him if appointed manager.

Max Allegri has coached teams such as A.C Milan and Juventus, two of the biggest clubs in all of football. He would be able to handle the pressure because he has dealt with it before and has the experience.

The other reason I wouldn’t want Eddie Howe as Manchester United manager is because he reminds me of David Moyes.

Moyes was appointed as United manager in November of 2017 and was sacked 10 months later. The club finished 7th during his only season as manager. He managed Everton before being hired by United. The reason Moyes reminds me of Hoye is because, like Howe, Moyes coached Everton, who aren’t as small of a team as Bournemouth but definitely aren’t a football giant.

They both did quite well with their respective clubs but nothing extraordinarily special. Therefore, just like Moyes couldn’t handle the pressure coming from Everton, it is terrifying to think what might happen if Eddie Howe is appointed as manager coming from Bournemouth.

Not only is Eddie Howe not experienced enough for the job, his resume isn’t strong enough, in my opinion. Since 2015/2016, Bournemouth’s first full year in the Premier League under Howe, Bournemouth have finished 16th, 9th, 12th, and 14th.

Even though Bournemouth don’t have the strongest squad, if Howe is as skilled as a manager as he is made out to be, then you would expect him to be able to get his team to perform better, and clearly his teams form has been quite mediocre.

Overall, Eddie Howe’s lack of coaching a big club and mediocre record is why he shouldn’t be United manager. Max Allegri’s winning background, experience, and well thought out tactics are why he should be appointed next Manchester United manager if they are to sack Ole Gunnar Solskjaer.