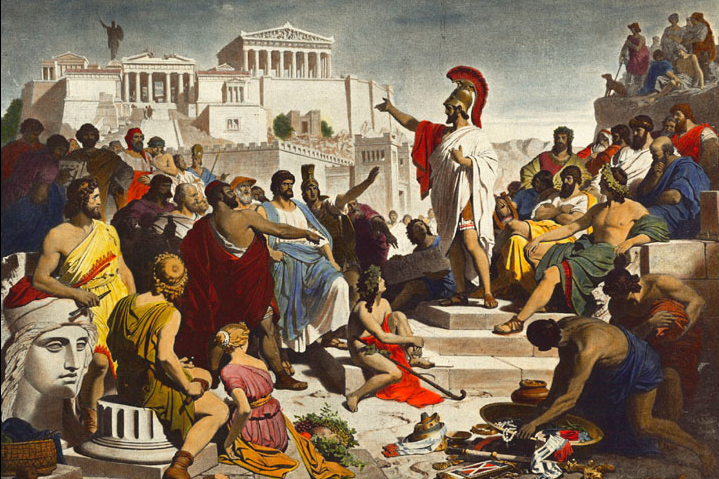 (Photo used with permission from www.ancientgreekbattles.net)

Photo used with permission from www.ancientgreekbattles.net

Perhaps one of the greatest revelations of the Grecian age was that of democratic governance. At this early stage in organized  human society, we had discovered that social institutions could only function if the consensus of the greater population had a say in how they were run.

Fast forward 1000 years and the noblemen of the court of King John came to the same conclusion: a government run to serve the interests of a singular man or minority of the royal court was not one under which they wanted to live. Again, in 1689, at the cusp of the enlightenment movement, the people of Britain, looking past the feudalistic nature of their prior existence, also came to the realization that a productive and just society could only function if the people were able to have a say in the proceedings of government.

From there, the idea of democracy blossomed, with the 18th century seeing a pivotal shift in governmental philosophies. The successful American fight for secession breathed light into the notion that bureaucratic imperialism no longer had to be the way of the land and the subsequent French Revolution revealed that feudalistic servitude did not have to prevail.

Nowadays, most of us are proponents of the idea that we should all have a say in government. However, the question that history has not definitively settled in the minds of those of us living in the present: How should people have a say?

The word democracy is often  thrown around in the rhetoric of our populist political campaigns. It has become a rhetorical buzzword standing in for any system which governs with a component of popular say. This has caused the meaning of the word to be diluted, a dangerous lack of clarity. It has caused people to conflate the representative with pure democracy.

The truth is, that democracy as a system of government is extremely dangerous. History has time and time again shown us that if the balance between popular consensus and government control shifts too far to the former, mob rule can triumph. James Madison warns of this phenomenon in his contributions to the federalist papers, defending representative democracy, warning that “A common passion or interest [could] be felt by a majority, and there is nothing to check the inducements to sacrifice the weaker party” (Federalist Paper 10).

However, this notion of pure democracy giving voice to the mob is not just a theoretical one spouted in intellectual debate. History has seen the balance shift too far toward the people before. In postwar Weimar Germany, for example, an aspirational Adolf Hitler was able to rally a considerable amount of the voting populous around the common concerns of an estranged people. His dangerously nationalist platform was voted for by approximately 6.4 million people. Hitler was able to rally the mob to his benefit allowing him to rise to the position where he would have an opportunity to seize power.

Even in America, mob rule, as a result of a dangerously democratic system on the state and county levels have seen egregious injustices done. A great example of this was the plight of the Mormon people of Missouri. Residents of Nauvoo elected anti-Mormon officials, and through mob protests, drove them out of the county.

This is the same with the historic plight of African Americans especially in Reconstruction and Jim Crow, forced to live under unconstitutional and unjust laws on account of mob pressure from disapproving white communities. The annals of history testify to the truth that a government of any variety, dictated by direct democratic consensus can cause injustice to be inflicted on those who do not fall under the demographic favored by the mob.

The fundamental issue of government predicated on pure democracy is that it’s naively presumptuous of human nature, of the human collective’s sense of justice and morality. It silences any opinions which diverge from the minority and has a propensity towards oppression of those dissenting viewpoints. Instead, human societies require representative democracies, that see all voices contribute to legislation, that see to the preservation of group accountability and which see to the elevation of the better angels of our nature.