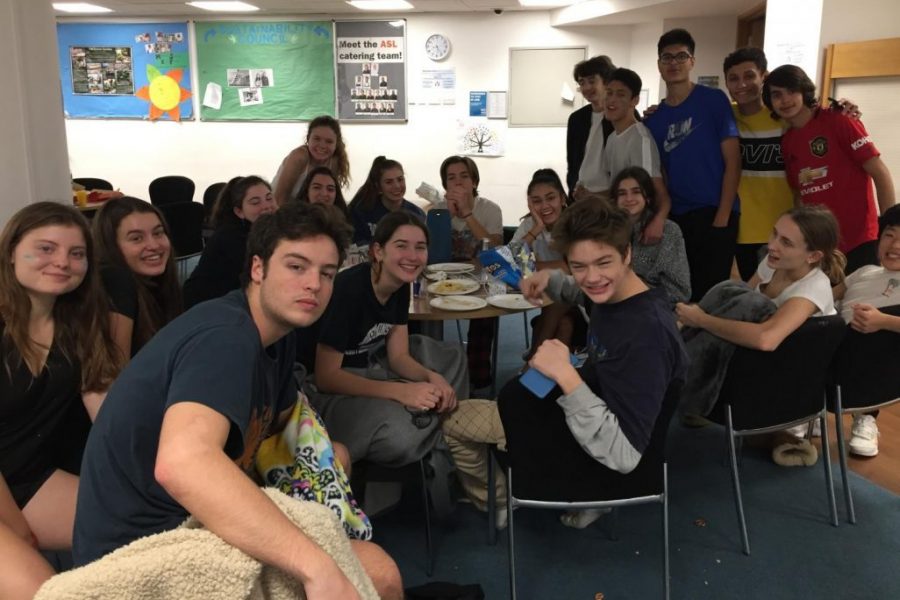 Grade 11 students bond in the Theater Foyer during the night of the Lock In. Aside from pre-organized activities, Grade 11 students had a substantial amount of downtime throughout the event.

The Junior Lock-In took place Sat., Nov. 16. The annual Grade 11 event aims to open up fixed friend groups to establish more lasting and meaningful connections between students. During the Lock-In, the Grade 11 class is locked inside campus throughout the whole night, encouraging students to engage in various community-building activities.

The Lock-In began with the whole Grade 11 class attending the High School play Les Misérables, where the class supported their Grade 11 peers alongside other High School Students who performed. Then, students regrouped with their advisories to take part in trivia quizzes and to compete against one another in an attempt to build the tallest tower from sticks and marshmallows.

The advisory competition was followed by a game of dodgeball, for which students prepared by applying face paint and other color-coordinated gear to support their advisory teams during their matches.

Students also took part in a multitude of other activities. The Student Council, Grade 11 Dean Jennifer Craig, and other teachers were responsible for organizing the Lock-In schedule which included a silent disco, basketball, movies, karaoke and dodgeball – all of which were accompanied by snacks and pizza at Midnight.

While the event organizers aimed to create an amenable and relaxing environment, Ellie Mankarious (’21) said that the program needed to be more tightly packed with activities.

“The activities were fun, but I thought that maybe there could have been a few more activities. I know that after the first silent disco and after the dodgeball, people were a bit bored because they didn’t know what to do,” she said.

Benjamin-MacDonald said that a key part of organizing the event was the integration of expectations and opinions of different class members.

“We picked some people from different friend groups and we had a meeting with them. We went over the plan with them and we asked what they think we should do or if there are any specific things that would be beneficial,” she said. The Student Council aimed to incorporate as many perspectives as they could to ensure that this event was a highlight for students.

For the most part, Grade 11 students positively reflected on the Lock-In. Mankarious said that, overall, the Lock-In experience was exceptional as it truly helped the class of 2021 become a more connected grade.

“Going into it, I really felt like I was quite close with my grade, but it was nice to get to know people on another level…It’s nice to be able to spend quality time with people without having to be in a crazy school environment as we are in most days,” she said.