Bergeron Fellow reflects on the power of storytelling 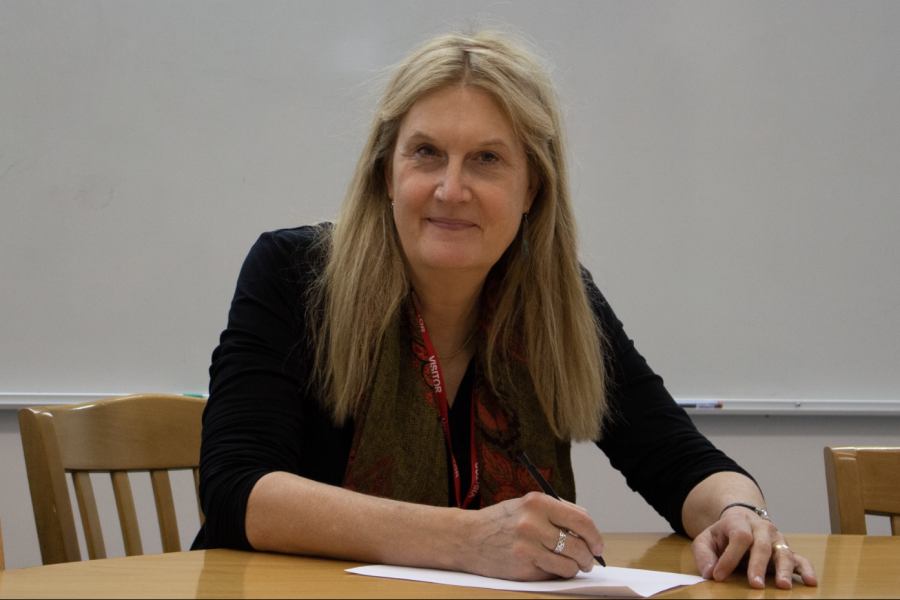 Author and activist Jennifer Finney Boylan discussed how she finds inspiration for writing and her stuggle with identity as a young person. Boylan has been writing for The New York Times since 2008 and became a bi-weekly columnist in 2016. Her memoir "She’s Not There: A Life in Two Genders" was published in 2003 and was the first book by an openly transgender person to become a national best seller.

“I want people to think of writing as the most fun thing you can do,” Bergeron Fellow Jennifer Finney Boylan said. “It’s more fun than playing video games, it’s more fun than riding a roller coaster, and the more you work on something, the more it reveals itself to you.”

Boylan is a memoirist, op-ed writer for The New York Times and a professor of English at Barnard College. She is also a transgender activist. Her best-selling autobiography, “She’s Not There” details her life as a transgender woman.

Arriving to school on Nov. 12, Boylan spent the week working with students and teachers as part of the Bergeron Fellowship. Established in 1996, the annual fellowship hosts a writer-in-residence for a week to work with Middle School and High School English classes.

Boylan had known about ASL for a while through Head of College Counselling Anne Richardson, who is a family friend. Richardson had been a college counselor at Kents Hill School in Maine, where Boylan’s two sons attended.

However, Boylan heard about the Bergeron Fellowship in 2017 when she received a letter from Head of School Robin Appleby, outlining the position and asking her to come in November.

During her four-day stay, Boylan attended seven High School classes, met with four student groups, and had lunch with the English Department. She also addressed the whole High School and Middle School on Nov. 12, gave the Bergeron lecture on Nov. 13 and was available for the rest of her time to meet one-on-one with students and faculty.

Since the majority of Boylan’s work takes place in universities, she said that she usually speaks to a self-selecting group of people who are actively interested in either journalism or gender issues. Consequently, Boylan “never knows what to expect,” when speaking to large assemblies of high school students.

“You shouldn’t be surprised if some of the students don’t want to be there or if they think that talking about transgender issues doesn’t effect them or that they might be skeptical about or embarrassed by [transgender issues],” she said. “I’ve had some experiences where I’ve felt a little like I was the diversity poster child who was being dragged onto the stage and I don’t particularly like speaking to people who don’t want to listen to me.”

Although Boylan was expecting students to be respectful and interested, she said she was overwhelmed by the extent that students were engaged and “was really moved by the school.”

“I wasn’t expecting it to be an audience of such interested and sophisticated students,” she said. “To tell you the truth, I was really blown away by it.”

What moved Boylan the most during her time at the school was lunch with a small group of Middle School students. Boylan said that she had only spoken to middle school students twice before as younger students are not a demographic she is usually set up with.

“This group of students was so curious and optimistic and hopeful, there wasn’t a shadow of cynicism on them,” she said. “[Older] people can get really jaded and sarcastic and sometimes a little bit mean. I can’t tell you how cool it was to be with this group … it left me feeling like there is real hope for the future.”

Outside her work as an activist and teacher, Boylan has been writing for The New York Times since 2008. She was initially contacted, while publishing a memoir about growing up in a haunted house, to write a column for Halloween. The New York Times then asked Boylan to write campaign updates for the 2008 U.S. Presidential election from the state of Maine where she was living.

“Once I’d done that I had kind of become a regular, I just lucked out to tell you the truth,” she said.

In 2016 Boylan was asked to start writing a column every other week.

“I think they wanted to have a transgender person’s voice on the page … so that’s my beat, but I also have a pretty wide open mandate to write about whatever I want,” she said. “I write about LGBT issues but I also write about dogs and pizza and cocktails so it’s a good gig.”

“To know yourself is not something you can do in a day or in a week or in a year. Your heart, your soul, it really takes a long time to reveal yourself.”

Boylan said that her writing process involves completing multiple drafts of every piece. She said that this is equivalent to a musician practicing their instruments and that she enjoys rewriting.

“I am a maniac on the subject of revision,” she said. “I think that the best writing happens at the second and third draft stage if you let yourself look at what you’ve done with honest eyes and with a dedication to making it better and different each time around.”

Describing her writing style as conversational, Boylan said that this helps her connect with all readers despite their familiarity with her topics. She said a fan once wrote to her saying “the funny thing about you Jenny Boylan is you seem almost like someone a person could know.”

“For a lot of people, straight people in particular, there is a sense that transgender people are distant and exotic and unknowable,” Boylan said.

As a result of her de-emphasised description of being transgender in her memoir “She’s Not There,” Boylan said some members of the transgender community did not enjoy the book. One transgender reader in particular rolled their eyes and told Boylan, “that’s the kind of book you would give your mother.”

“I guess they meant it as an insult but I took it as a compliment … that this particularly difficult terrain could be made accessible to someone who really doesn’t know anything about it,” she said.

However, Boylan has not always been confident in her identity. Attending a conservative all boys high school in the Philadelphia suburbs that was “basically arranged around football and wrestling,” Boylan struggled immensely with her desire to be a woman. Not yet knowing what the word transgender was, Boylan describes the uncertainty for what her future would hold as “paralyzing.”

Despite the fear and hardships she faced as a teenager, Boylan said that those experiences have made her who she is today.

“I would like to say it would have been cool if I could have lived a different life but on the other hand it’s all the troubles that have given me the fierceness to become myself,” she said.

Boylan said that she would advise young people struggling with any aspect of their identity to talk about it with the people closest to them. Boylan wishes she had opened up to her own friends as a teenager and regrets trying to create an identity of someone who didn’t have any problems.

“We think of people who never struggle as the cool people and that’s the dumbest thing,” she said.

“I have met some people who don’t struggle and they are completely boring. They are the least interesting people and the only reason that they are not struggling is that they have never looked deeply enough into themselves to see the contradictions that are inside all of us.”

“It can really hurt to have that kind of struggle. But it hurts more when you think you are alone. It’s more normal than not in high school to be struggling with your identity. In fact we shouldn’t even call it struggle, think of it more in terms of exploring,” Boylan said. “To know yourself is not something you can do in a day or in a week or in a year. Your heart, your soul, it really takes a long time to reveal yourself.”

Additionally, Boylan said that what really helped her get through her teenage years were a few excellent teachers at her high school who taught her how to describe difficult parts of her life.

“I had a couple of teachers who changed my life, who literally woke me up like I was sleeping beauty,” she said. “They gave me the love of language, poetry and stories ..and it gave me the ability to be articulate about my emotions and my interior life which is the thing in the end which ended up saving me.”

Boylan carried this love of words and language throughout the rest of her life.