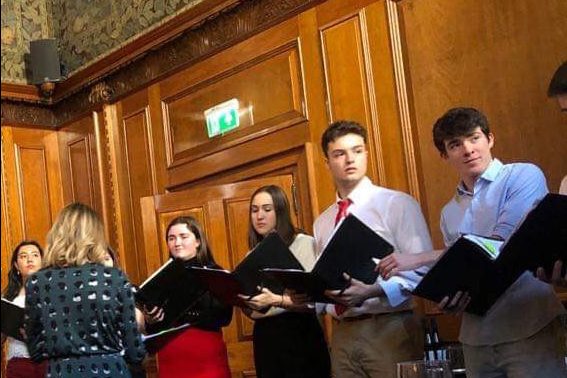 The Chamber Choir performed at The St John’s Wood Woman’s Club Annual Holiday Luncheon Dec. 2. The event was previously held in The Dorchester, but was hosted this year by The Ned Hotel.

The selection of songs performed varies from year to year, having previously included Christmas-related music, Baroque and Classical pieces, and other types of songs. Chamber Choir Member Gabe Hajjar (’20) said this year’s performance was holiday-themed. The repertoire included arrangements of commons Christmas carols like Deck the Halls and Jingle Bells.

“This year we [did] a Christmas-themed medley of all of the different Christmas songs, merged into one,” he said.

Hajjar said the experience is valuable in terms of singing ability. The smaller size of the Chamber Choir, having 12 members, offers a different dynamic from the large Concert Choir.

“Singing in a large ensemble is a lot easier than singing in a smaller ensemble because there is this factor of listening that you have to take into account a lot more [in small ensembles] … it’s building that skill in Chamber Choir,” he said. “It’s why most of us join it and why I like it so much.”

Hajjar added that the experience is beneficial in terms of bonding with members of the Chamber Choir, which helps the success of the group.

“It’s a fun experience because you get to not only talk to and sing with underclassmen, you also get to joke around with the choir teacher, [Choral Director Lisa Ross], and establish a better bond with her in order to expand your skills in singing,” he said.