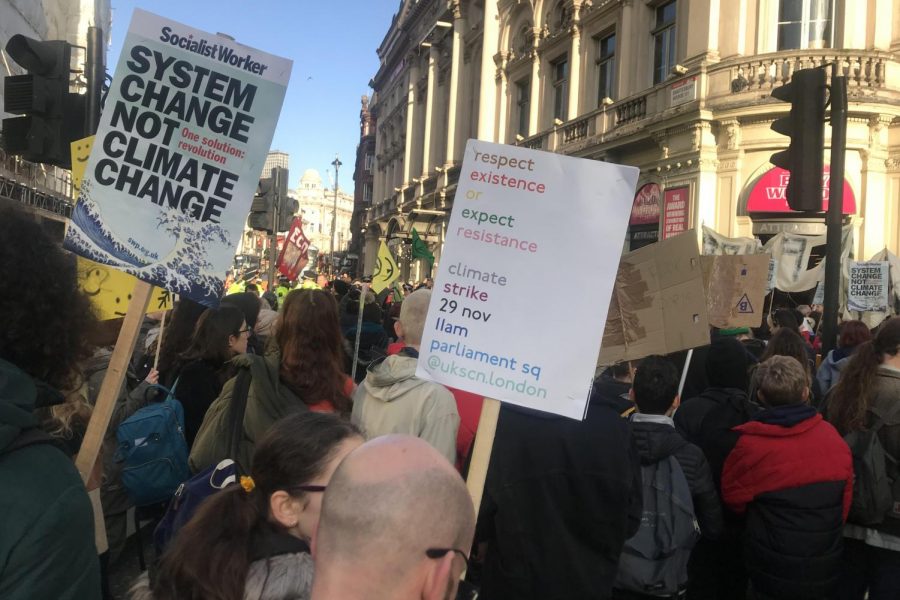 Protestors march along Shaftesbury Avenue on their way to Trafalgar Square on Friday, Nov. 22. Many of the protesters held posters with sayings such as “System Change not Climate Change” and “Planet not Profit.”

Over Thanksgiving Break, a climate change protest took place Nov. 22 at Trafalgar Square. Students and people across London went on strike for the issue of Earth’s rising climate.

Wilhelmina McQuarrie (’23), who has been to two previous climate change marches, attended the protest and said that climate change is a pressing issue.

Sustainability Council Member Cece Muecke (’21) said that she has been to one previous climate change protest.

“Seeing the number of people coming together like that, it can definitely have an effect on the way other people view the issue,” she said.

Muecke continued to say that she protested for climate change because she values nature.

“I hope [the marches] will inspire some change in the government, with the UN especially,” she said. “I was first told about climate change in sixth grade, in my Earth science class and then it always seemed important to me.”

McQuarrie added that she was willing to give up her break for the cause.

“Four or five hours out of one day, one week, one year is not a huge sacrifice to make for the cost of our living,” McQuarrie said.