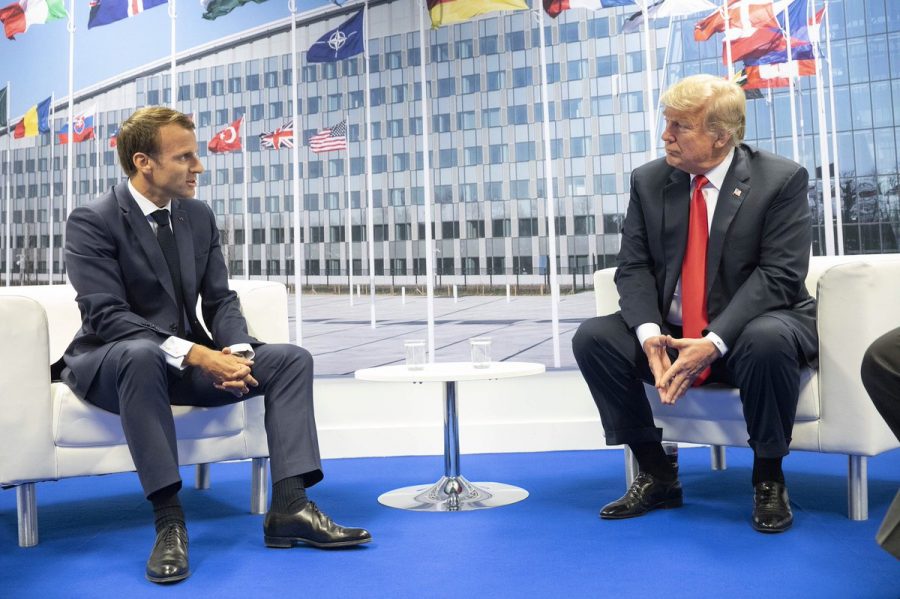 Photo used with permission from twitter/scavino45

French President Emmanuel Macron and U.S. President Donald Trump converse at the 2018 NATO summit. At this past summit in December, a video went viral that showed world leaders joking about President Trump.

Defining leadership is one of the most important topics that high schoolers have to learn.

We face countless applications for summer programs, colleges and other organizations which ask why we believe we embody the values of leadership.

We perform leadership activities at school to promote bonding and character building.

We are told to look up to our leaders, to the people who are supposed to be inspiring us, guiding us and teaching us.

I have had my fair share of application questions asking me what my definition of leadership is, and how I demonstrate it in my daily life. And without fail, every answer I give consists of the need to be a role model for someone.

To be a leader is to be the person who inspires another to act morally and responsibly. To me, being a leader is not about the power you have, but rather the values you uphold.

However, after the events of the annual NATO summit in London Dec. 3-4, my definition and those I look to as inspiration for leadership were put to question. I am no longer sure whether or not I can use it in my future applications or if I can even continue to live by it myself.

Why? Because the global leaders who I read about, the individuals who are leading nations, those holding the most power in our world, seem to be acting quite on the contrary.

A video was released of Canadian Prime Minister Justin Trudeau talking to British Prime Minister Boris Johnson and French Prime Minister Emmanuel Macron about U.S. President Donald Trump. They were caught discussing his press release, criticizing its length as well as the reaction of his staff.

Regardless of my political views and opinions towards Trump, to me, this is not leadership. I was confused about how talking behind the back of another politician, and mocking his mannerisms and tendencies, was how a political leader should act.

It is true that I am not an adult, but from how I have been taught, this is not how a leader should act.

I do know that if this is leadership. If these are the qualities my leaders are displaying, perhaps I should no longer regard them as role models or as individuals to look up to.
I was confused about how talking behind the back of another politician, and mocking his mannerisms and tendencies, was how a political leader should act.
When we are beginning to live in a society where the difference between the comportment of children and that of the adults governing the children is blurred, we have to question whether or not our leaders are in fact abiding by the traditional definition of leadership.

I do not want to be governed by an individual who mocks their colleagues and who spends their time gossiping rather than discussing the need to maintain the foundations of NATO, especially on its 75th anniversary. There are more important topics to be discussed, than the petty talk of  President Trump’s abnormally long press conference.

The politics of this world cannot be the stage for playground conversations, especially given the grand challenges the world currently faces.

We don’t have time for our global leaders to be caught dishing about one another. We need leaders who will place their biases aside and collaborate for the benefit of the citizens and countries whom they represent.