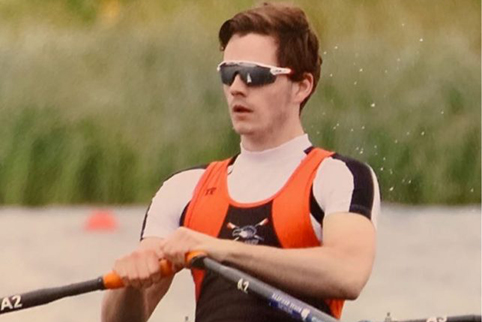 Jack Wilkin (’20) rows for the Varsity Crew Team at a past regatta. Wilkin will continue his rowing career at the University of Pennsylvania.

Jack Wilkin (‘20) committed to and officially got into the University of Pennsylvania (Penn) before the break.

He was between Massachusetts Institute of Technology (MIT) and Penn before making his final decision on Penn.

“It was really a question of where I could go to pursue top academics and top athletics, and I think Penn really provided that for me being a Division I program and having great academics,” he said.  “I ended up not choosing MIT because there wasn’t enough in terms of student life and the rowing team itself wasn’t developed enough.”

Wilkin went on an official visit to Penn in mid-October which solidified his feeling of Penn being his top choice. He met some of the kids on the team as well as the coaches.

“The coaches were very welcoming and the feeling I got after seeing it all in action was? that it was what I wanted,” he said.

After visiting, Wilkin was overjoyed.

“When I left that interaction, that official visit, knowing that they wanted me to be on their team that was kind of a surreal moment for me because I never imagined I would be able to get to that level of competition,” he said.

Wilkin knew he wanted to pursue crew in college after winter in Grade 11  He began the process by reaching out to ten to 15 school let them know that he was interested.

“Over the next couple months I started communicating with these schools and narrowing my choices down until I had about five schools left,” he said.  From there he chopped it down to MIT and Penn before making his final decision.

Wilkin said he is going to continue to work hard for the rest of the year and try to cut more off of his times before heading to university in September.