Grade 9 social rescheduled due to lack of participation 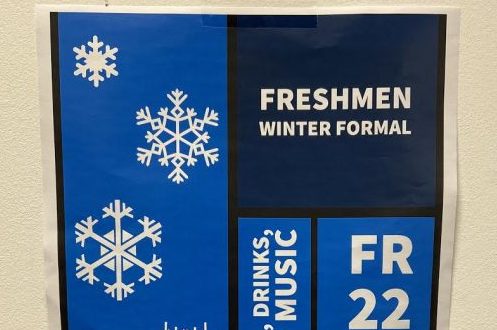 Posters for the Grade 9 Winter Formal are hung up around school. The formal was initially planned for November, however was postponed until January due to lack of student/chaperone interest.

In November, the Student Council planned on hosting a Grade 9 Winter Formal as a fun way to help the grade bond. The event was postponed due to a lack of student participation and teacher supervision. The Grade 9 Winter Formal was originally planned to take place on Friday, Nov. 22 from 6:30 p.m. to 9 p.m.

Grade 9 StuCo representative MacCoy Weil (’23) said that the formal was postponed primarily because they did not have chaperones.

“One of the main reasons the winter formal was canceled was due to the lack of teacher supervision. Although we sent out many surveys, clearly there wasn’t a clear enough communication as we didn’t have that many teachers sign up for it,” he said.

Along with the lack of supervision, there was not enough engagement from the students in order for the event to move forward.

“It was a bit surprising to me that very few students signed up for the winter formal. StuCo tries to throw events that we believe the students will really enjoy so the lack of students was a bit of a shock to us,” Weil said.

The change was not without its upsides, however.“On a brighter note, the moving date will give the StuComore time to advertise the winter formal as we are always looking to improve,” Weil added.

Echoing Weil, Grade 9 Dean Duncan Pringle said  that the social was postponed due to a lack of people signing up.

“On the morning of the formal, when I checked in with the Grade 9 Student Council representatives, only 25 people had signed up to attend. Just the organization wasn’t great and upon reflection, we realized myself included we hadn’t done a great job promoting,” he said.

As a result, the StuCohas decided to take more time to advertise for the social and review options for chaperoning. The social is set to take place on January 31st.

The dance will take place in the Farmer Family Gym. This event has been funded by the StuCco and has been put together by the five Grade 9  StuCco members elected earlier this year. These students’ efforts, along with that of several other adults including Pringle and Math Teacher  Tony Bracht, a StuCo coordinator, have all contributed to the planning of the formal.

StuCoRepresentative Darren Morris (’23) said  that, with the teamwork of the representatives and new inputs into the formal, they will “make the best formal yet.”

Each StuCo representative was given a certain duty in planning the formal.

Ruhan Bhasin (’23) was responsible for the decorations and activities of the dance. He did not want to disclose details about the event to keep it a surprise.

“Decoration specifics are secret, but there is definitely a photographer,” he said.

Morris was in charge of the food, and an email sent out by Pringle Nov. 19 confirmed that there will be free pizza, American candy and drinks at the dance.

Weil and StuCo representatives Gabriel Romualdo (’23) both assisted Morris in the food planning and also gathered chaperones to attend the dance.

StuCo representative Ella Podurgiel (’23) is in charge of music, and recently sent an email to all students concerning song suggestions. The students’ inputs allowed the StuCo to involve the student body in decision making.

“Realistically hope to see the majority of our class, but we can only control the experiences of people who actually show,”  Weil said.