The ugly side of the beautiful game

Racism in football has become increasingly present. Teams and associations have taken different approaches in how to combat the issue. 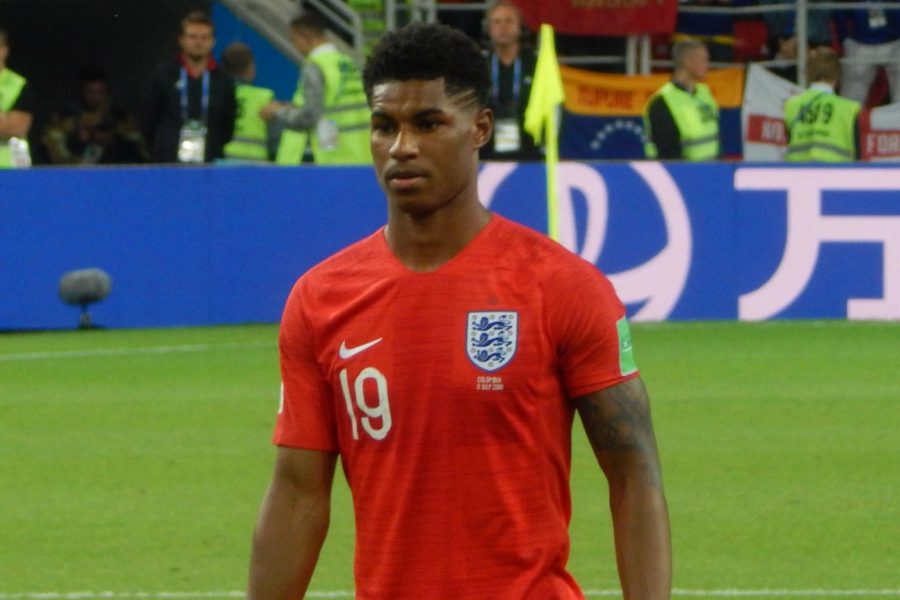 Marcus Rashford played in the game against Bulgaria where the fans made racist and antisemitic chants. He tweeted after the game to highlight the difficulty of the situation and the necessity of reform.

Bananas thrown onto the pitches. Monkey chants. Racist jeers from the crowd. It was believed that racism against black football players was stomped out after it hit its peak in the ’70s and ’80s. But almost half a century later, it hasn’t stopped.

Currently, much of the racism occurs in less liberal Eastern European countries and slowly dwindled out in places like England as fans and teams became more diverse.

Most recently, Brazillian midfielder Taison was sent off for reacting to racist abuse he and others on the Shakhtar Donetsk team faced from fans during their away match at Dynamo Kyiv in Ukraine Nov.10.

Taison made a gesture of anger and kicked the ball into the crowd as a reaction to the abuse, before he and the rest of the team were forcibly sent off during the 77th minute of the game, per the United European Football Associations’ (UEFA) anti-racism protocol.

Brescia Calcio player Mario Balotelli had the same reaction to monkey chants directed towards him in his Serie A match against Hellas Verona in Italy. He walked off the pitch in protest but was convinced by his teammates, the opposing team and match officials to continue playing.

Dubbed the “Three-Step Protocol”, UEFA has approved referees to act on racist incidents during games, and in serious cases, the power to abandon a match. If a referee is made aware of racist behavior during games, they must first briefly stop the game and an announcement will be made in the stadium for fans to immediately stop racist behavior.

Secondly, if the racism continues the referee may suspend the match for five to ten minutes and send all the players back to the locker rooms while another announcement is made in the stadium.

Lastly, if any racist behavior is still occurring after the game is resumed, the referee must cancel the match. Any decision to abandon a match will be taken only as a last resort, and its impact must be carefully been assessed, especially as abandoning a match comes with an automatic 3-0 win to the team experiencing the abuse.

Described as “one of the most appalling nights I’ve seen in football,” by Football Association (FA) Chairman Greg Clarke, the Euro 2020 qualifier match between Bulgaria and England Oct. 14 was halted twice for monkey chanting, nazi salutes and verbal aggression to the black English players by Bulgarian fans, some of whom were dressed in all black with bandanas around their faces, in the 28th and 43rd minutes of the game.

The Bulgarian Football Union were punished with a 75,000 euro fine and ordered to play their next two home matches without any spectators, another financial punishment as Bulgaria would be missing out on thousands of ticket sales, according to the Independent.

England went on to finish the match 6-0, but Ian Wright, former England player and currently an ITV and BBC Sport commentator, said the team’s biggest victory of the night was that the abusers had to leave the stadium. Wright said that this generation of football players, and not just black ones, won’t tolerate racism anymore. “This is the ‘by any means necessary’ generation. They don’t need to take that [racism] anymore when they have their own platforms and the protocol to stick to” he said.

In addition to Bulgaria, the Romanian and Hungarian Football Federations/Unions were punished twice for racism at their matches, and the Serbia and Montenegro football federations were both punished once. Individual teams have also been fined for their fan’s racist behavior; Lazio (Italy), Rangers F.C. (Scotland), FK Partizan (Serbia), F.C. Dinamo Tbilisi (Georgia), Universitatea Craiova (Romania), GNK Dinamo (Croatia) and Shakhtar Donetsk (Ukraine).

A difference between racism in football in the past and present is that now players have more freedom to speak up against the racism they experience when playing in an away match. Many English players took to Twitter and Instagram to speak up about their experience after the Bulgaria match. For example, Manchester United and England forward Marcus Rashford and defender Harry Maguire tweeted:

Not an easy situation to play in and not one which should be happening in 2019. Proud we rose above it to take three points but this needs stamping out. pic.twitter.com/jTnUGOa8z2

The best way to bounce back. Proud of the team. There’s no place in football for that – disgraceful behaviour. Something must be done. ??????? @England

Even though black football players are still victims of racism, many countries have come a long way since racism ran rampant at their own home games, such as England. In 1978 Viv Anderson became the first black player on the England national team, and the most recent is Tyrone Mings who made his debut in the England vs Bulgaria. Since Anderson’s career for England, 92 other black British footballers have played for the national team. Despite this significant change in diversity on the team, globally there is still a long way to go to kick out racism in sports completely, and diversifying national teams will not solve it all.