A look toward the future: technology perspective 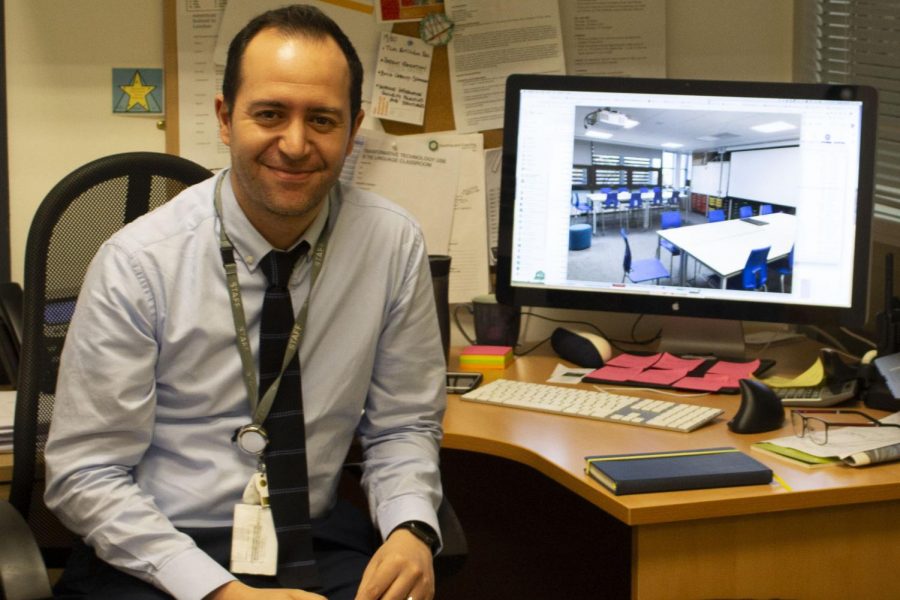 Director of Technology Nadjib Aktouf had a role in overseeing the development of technology at the school. Most recently, the change from PowerSchool Learning to Schoology was a major transition for the school that he helped organize.

In 2015, there was an intentional merge of both the library and technology departments because of the digital tools and resources which overlap. However, in the following five years, there has been what Director of Technology Nadjib Aktouf has considered an “organic” transition into what is now considered the Technology, Information, Literacy and Media group (TILM).

The current makeup of the TILM group is more defined than it was five years ago as Aktouf said there is an explicit break down of three main groups: the technology department, the librarians, and media specialists.

“[There is] technology, information literacy: where the librarians play a big role, and our media specialist are also part of the TILM because we see that all of these things go hand-in-hand,” he said.

In the group’s foundational years “the rollout wasn’t an official ‘on such date, we’re announcing [the group]’. It was very organic in the sense that it took time for the team to come together and also for the structures to take place”.

Following this year’s transfer from the learning management system of PowerSchool Learning to Schoology, Aktouf said that the TILM group had a “big role” in researching for the updated system. The driving factor behind finding a new system was complications with students using multiple platforms for different courses.

Schoology has brought students, teachers and parents a “unified experience” Aktouf said, though that has not come without difficulties.

Aktouf said that all teachers are at the forefront of facing the adversities of Schoology purely because of the time spent adjusting to the new system.

“Teachers are spending a disproportionate amount of time learning how to use the system, learning to work through the problems of it, and learning how to gain a better workflow,” he said.

These obstacles are especially evident in the early stages, considering that PowerSchool Learning was active for eight years. “After eight years, [teachers] get used to where things are, how resources are published to students and how assignments are collected and returned to students,” he said.

Aktouf described Schoology as being “radically different” from PowerSchool Learning. Therefore, he said that it is natural for teachers to spend more time learning the system. As a result, it leaves teachers less time to correspond with students about their learning as they usually would.

“That’s a major pain point that we’re looking to address [and] the best way that we find that we would address it is through a reflection process,” he said.

Alongside the Academic Leadership Team,the TILM group is working to rekindle the original committee which oversaw the selection of Schoology and is also organizing focus groups of teachers and students to calculate the effectiveness of Schoology thus far.

“How are we using Schoology so far? And, what can we do to make our use of it perhaps more efficient and better?” Aktouf said are some of the overarching questions in taking steps to move forward.

Aktouf said the transition into a new learning management system is “an ongoing project”.

“There have been some advantages, but outweighed by some of the challenges because those are more immediate things that stand out,” he said.

In recognizing that such improvement needs to be made “immediately”, Aktouf also acknowledges the perspective of the receiving end: teachers and students.

“The frustration arises from both teachers and students when there’s a new system that doesn’t meet the needs,” he said. “We need to think of creative ways and work around so that those needs are met because the technology always follows the pedagogy.”

Beyond the implementation of Schoology, Aktouf said that other projects which the TILM group has simultaneously been working on, on behalf of developing student learning is in considering the evolution of the Mellon Library as a whole: in set up, services, and resources.

“We’ve tried to make it more of a flexible learning space,” he said. “There’s a TV panel, to make it easier for classes to go, have a quick lesson, or have an extended lesson with access to research materials and also to the library specialists there who can help with research projects.”

These changes are “baby steps” compared to what Aktouf said are “long-term” goals of changing the entire physical layout of the library. However, there are vast changes being made to other areas such as “expanding out digital resources and digital libraries”.

Another area Aktouf highlights as to where students are heading with the involvement of technology is through the component of theater technology. “Students play a role in productions and they play a role when we host events like the First Lego, or the junior FLL Lego Leagues,” he said. “Those are students managing the booth: the sound and lighting desk.”

Students work with School Center Manager Mark Chapin to learn the production of lights in sounds. “There is a technology we’re also looking at: how we’re sourcing digital tools that [is] not only consuming information, consuming data, but also to create,” he said. “That’s a big thing for an authentic experience, an authentic learning experience where students are creating something that is project-based.”

On a digital level, the TILM group has looked at ways in which they can support the Make Innovate Learning Lab space also looking at our digital tools like our adobe creative cloud and giving more access to all students by user this time. “All our students have access to the adobe tools to create videos or magazines using indesign or photography work using Photoshop, and not just device-based,” he said.

In regards to where Aktouf envisions the future of the TILM group, Aktouf says this begins by “[having] more student input, more student voice in everything that interests students particularly.”

“One thing that may be overlooked is the amount of data that the technology department has access to; we’re very open and keen on sharing with student groups,” he said. “For example, if there was a group of students interested in how much paper waste and consumption that we have at ASL, that data is available for students to look at to perhaps ask questions about different ways we can be looking at our printing.”

Aktouf insists that students take advantage of the TILM group as a way to assist their own learning. “Our door is right here … let us know what kind of data you need,” he said. “We’re a resource as well.”