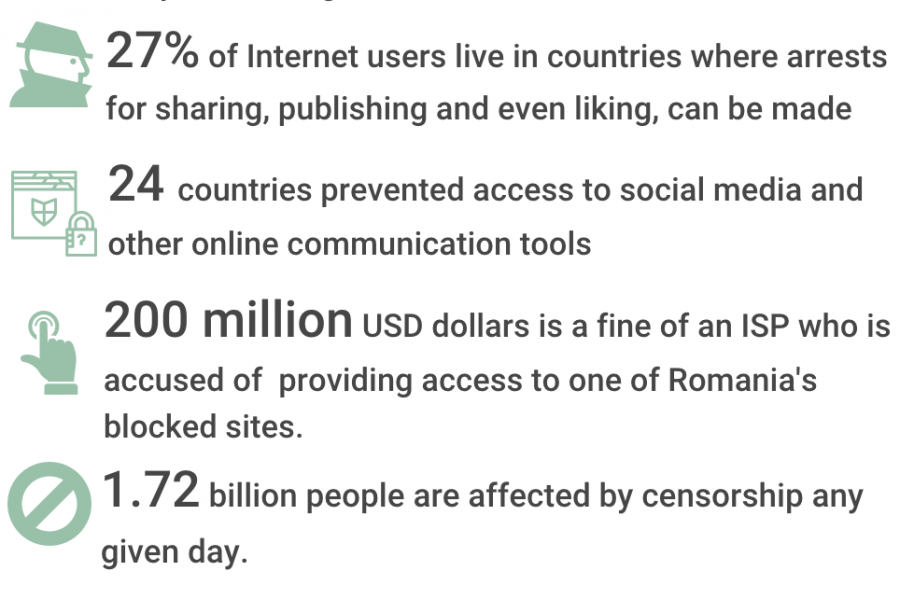 Imagine a society without online censorship – terrorist propaganda, hate speech and sexually graphic images could all run rampant on social media and the Internet. While this outcome is exaggerated, it can altogether be assumed that the online world could become upended.

Censorship is a tool that protects us, as citizens, in countless ways. It limits criminal activity, reduces false data, improves online security and, in ways, promotes cultural respect. Governments and private institutions guard us from seeing rude, unnecessary and harmful content. Yet, while censorship can protect us, it raises the question: who will guard online users from unjustful censorship?

It is a common belief that due to the rise of the Internet, the direction in which information flowed shifted from governments to individual citizens. Even though the risk of a complete government-controlled media slightly diminished in most democratic countries, governments and private institutions continue to block, restrict and limit content.

Indeed, censorship continues to thrive in the new digital age. According to University of Cambridge, more than 60 countries engage in some form of state-sponsored censorship. Additionally, according to the Freedom House 2019 report, out of the 3.8 billion Internet users in the world, 71% live in countries where a punishment, such as imprisonment, was employed for posting content on religious, political or social matters. An additional 46% of the total Internet users live in countries where access to social media was permanently or temporarily restricted. In essence, the promise of the Internet’s access to a multitude of sources and the free flow of information remains unfulfilled.

While the statistics provide an overview of the extent of censorship, its true scope is obscure. Even today, many users may not be aware that they are exposed to censored information. As Internet usage continues to grow, censorship continues to foreshadow the information available.

For instance, according to Statista, China, a country with the most Internet users, is also the world’s most forceful censor. China continues to block content deemed inappropriate, including foreign news sites, by imposing its political values on the rest of the population. Approximately 2 million police censors control the Internet in the country. However, according to a 2014 BBC poll, 76% of Chinese Internet users did not feel like there was government Internet surveillance.

While censorship can be visible, the measures taken by governments such as China to limit the flow of information remain hidden deep below the surface.

The true reasons for why the extent of censorship is a greater problem than we believe, is its world-wide prevalence. Even countries that proclaim themselves democratic continue to effectively use means of speech suppression.

According to Google Transparency Report in June 2019, there were 17,088 governmental takedown requests; that’s approximately 16,000 more requests to remove content as compared to 2010.

While the increased number of take down requests in 2019 can be attributed to the Internet’s constant growth, can we continue to justify censorship in the context of free speech?

Some will claim that censorship’s only purpose is to act as a detrimental political tool, whose function is to restrict the flow of information and freedom of speech.

However, I believe that the topic is more nuanced. Censorship can play a beneficial, pivotal role in our society as in certain cases, censorship is utilized to prevent encroachment on human rights. For instance, hate speech, which includes violent threats, usually poses an imminent threat to an individual.Therefore, I believe that it is crucial that such information is blocked by governments and private institutions to protect the individual – safety proves to be weighted more heavily than the right to absolute free speech.

In effect, I believe that the blockage of such free speech stagnates the world wide efforts of democratization and free speech for all. It also once again shifts the responsibility of controlling our conduct and online behavior from people, to governments, which in my opinion, reverses the purpose of the Internet.

While activists continue to push governments for transparency and access to public information, nations continue to hold the power of altering information on the Internet to suit their political interests.

However, there is hope. I remain aware that even today, journalists like myself will continue to call out governments bent on controlling their citizens through media. While the activism against censorship persists, the web’s rapid growth will only intensify the debate over the extent of freedom of speech online.