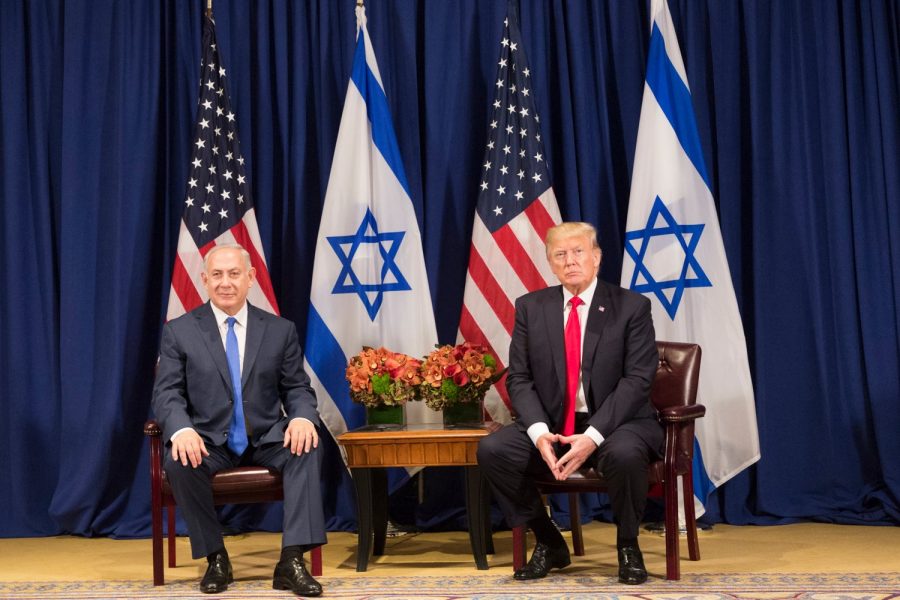 Photo Used with Permission from the White House

On Jan. 28, U.S. President Donald Trump announced another attempt at resolving the decades-long Israel-Palestine conflict. His proposed Middle East Peace Plan was drafted under the supervision of Jared Kushner, President Trump’s son-in-law and his Senior Advisor. Trump announced it alongside Israeli Prime Minister Benjamin Netanyahu at the White House. The purpose of the plan, according to Trump and Netanyahu, was to resolve the conflict and achieve peace and prosperity.

Leyth Sousou (’22), whose father is Palestinian, disagrees with the idea that this plan will achieve peace.

“Trump says he is taking into account both sides and trying to keep the peace, however, I think that what he’s doing is just going to cause more conflict,” he said.

Israeli student Micaella Lavi (’21) said she thinks it is difficult to judge the success of the plan since there was a lack of Palestinian representation.

“The fact that there wasn’t any Palestinian representation there throughout the process makes the plan hard to judge,” she said. “From my understanding, they told Mr. Abbas to discuss with them; however, he disagreed and left, so I do feel as though there needs to be more representation from the Palestinian side.”

Social Studies Teacher Becky Mason said he does not believe the Middle East peace plan will work as it essentially promises less than the Oslo Accords. The Oslo Accords agreed in 1993 provided a framework for the two-state solution with details to be negotiated. Initially, the plan seemed to show promise and progress. However, lack of agreement over the years during negotiations brought the process to a halt.

“I don’t see this working because a much more equal idea came about in 1993 and nothing really came of that ultimately, so I don’t see how this plan is going to change much or promote peace.”

Following the release of the peace plan, world leaders have responded to the plans proposal. German Foreign Minister Heiko Maas said that “only a negotiated two-state solution, acceptable to both sides, can lead to a lasting peace between Israelis and Palestinians.”

Prime Minister Borris Johnson says although the plan isn’t perfect, it promotes peace as well as a two-state-solution. “No peace plan is perfect, but this has the merit of a two-state solution. It would ensure that Jerusalem is both the capital of Israel and of the Palestinian people,” Johnson said.

The two-state solution has posed as a foundation for resolving the Israel-Palestine conflict by establishing two lands, side by side, for two peoples.

Mason said he believes that the plan does not establish a proper two-state solution and, therefore, will not succeed.

“This plan essentially seems to end the idea of a two-state solution, which was the driving force behind the Oslo Accords. I just don’t understand how this plan will work, taking into account all sides.”

The Arab League held an emergency meeting following the announcement of the plan and voted unanimously to reject the deal. However, a few Arab countries believe the plan may propose an ideal solution. While the Arab League’s head, Ahmed Aboul Gheit, said that the reveal was a ‘short turn’ and declared that “this turn does not help achieve peace and a just solution.” Egypt has encouraged the Palestineans in a statement to consider the plan carefully.

One of the key proposals of the plan includes dealing with the critical issue of the status of Jerusalem. The plan states that Jerusalem “will remain Israel’s undivided capital,” and at the moment, both Israel and Palestine hold claims to the city. President of the Palestinian Authority Mahmoud Abbas responded to this proposal, saying that “Jerusalem is not for sale” and that Palestinians’ rights “are not for sale and are not for bargain.”

Israeli student Liam Hamama (’20) said that the way the plan deals with the division of Jerusalem is a critical fault in the proposal.

Another part of the plan proposes Israeli annexation of 30% of the occupied West Bank, including settlements. Over 400,000 Israelis live in West Bank settlements, which are considered illegal under international law. Israel, however, disputes this.

Settlements have been a key issue in previous negotiations.

Lavi said she believes that annexing portions of the West Bank will only cause further problems between both countries.

“I think as the years go by, Netanyahu has more plans for annexation. It’s going to be harder and harder to define clear borders for either Israel or Palestine,” she said. “I think that if there is ever going to be peace, Israel has to let go of some of their annexations and obviously that’s going to be extremely difficult.”

Similarly, Palestinian student Bissan Kablawi (’22) said that the lack of Palestinian involvement in the process and the annexation of land in the West Bank would cause this plan to fail.

“I think that it is absurd that no Palestinians were involved in the decision of this plan. They’ve made this plan sound as though they are “giving” the Palestinians more land. However, in fact, it is kind of the opposite because Israel is going to go into 30% more of the West Bank,” she said.

Trump’s plan also entails proposals for an independent Palestinian state with its capital in Eastern Jerusalem, where Trump says the U.S. would open an embassy.  The plan proposes a demilitarized state with Israeli sovereignty extending to the settlement blocs and the Jordan Valley.

Hamama disagrees with demilitarized Palestine and said he believes in order to recognize a self-governed state, the country should have the power to be militarized.

“The plan wants to prevent Palestine from having any form of military or defense force, which essentially leaves them at Israel’s mercy, so I think that’s another significant flaw,” he said.

The timing of the announcement has come at a time when both leaders are facing political challenges at home. While Trump was being subjected to an impeachment trial in the U.S. Senate, Netanyahu was facing indictment on corruption charges.

Sousou said due to both leaders’ legal troubles, they should have no authority in making such a significant plan.

“I think both Trump and Netanyahu aren’t in any position to make such a big statement like this that could change the whole outcome and peace process for the Middle East conflict,” he said.

Hamama agrees with Sousou and said that the timing in announcing the deal is quite suspicious.

“I think the timing was very opportunistic for both leaders, the plan has been drawn up for a few months, and it was reported that they were just waiting for the right moment,” he said. “There was nothing especially political that has happened in the weeks leading up to the announcement that wouldn’t make that week the perfect time to announce the plan, so I believe it was clearly supposed to draw the attention away from their respective legal cases.”