Coronavirus outbreak: where it stands 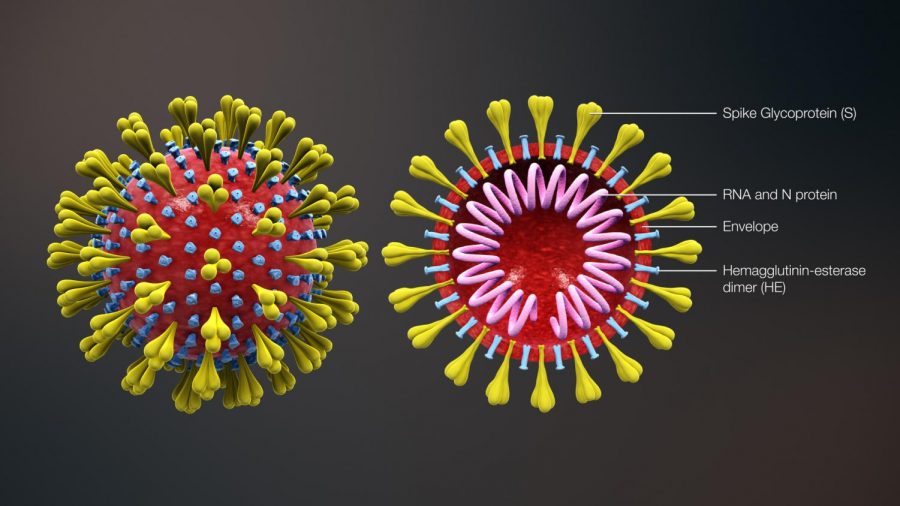 The COVID-19 Coronavirus, pictured above, has impacted society and the economy around the world. The virus has infected over 80,000 people, with most cases in China, and has killed nearly 3000. The outbreak has also had a large amount of cases in Iran, South Korea and Italy which have also resulted in several deaths.

The virus was initially contained within animals, but was transmitted to humans at a meat and fish market in Wuhan.

The transferral of the virus created an outbreak that has infected over 80,000 people thus far and killed nearly 3000 at the time of writing.

As a coronavirus, the symptoms of the disease resemble that of a flu, including a fever, cough, runny nose, sore throat and breathing problems, according to the NHS.

Ellie Lowe (’22) said that the spread of the disease is a concerning development.

“Obviously it’s a very imminent danger,” she said. “Being Chinese, seeing China quarantined and no flights are going there, it’s quite hard.”

So far, the vast majority of the cases are in China, but instances of the infection have emerged in numerous other countries across Asia, Europe and North America, including Germany, Italy, the U.S., Japan and France.

School Nurse Adam Bonnington said that authorities in the U.K. are “working hard to manage” the spread of the disease.

“The procedures that are in place are designed to manage that risk,” he said. “The government and the NHS and Public Health England have pretty strict procedures in place to manage the potential spread of the virus, so I would trust in that process in keeping everybody safe.”

However, the virus has also caused a change in school policy, with a school-wide email after February Break indicating that families who visited certain countries should self-isolate, writing, “anyone who has recently returned from visiting the updated list of [Category 2] areas, who develops cold or flu symptoms, should self-isolate and call NHS 111,” with Category 2 countries encompassing China, many Southeast Asian nations, Japan, South Korea and Northern Italy. Meanwhile, families who visited specific towns in Northern Italy, South Korea and Hubei Province in China were advised to self-isolate regardless of symptoms.

So far, numerous school trips have been cancelled, including the Model UN trip to Dubai, Honor Choir, Honor Band and Orchestra and the ISMTF Math Competition, over fears that the coronavirus may spread at events with many international schools in attendance.

Marie Ogino (‘20), who is on the math team, said that there is a risk of catching the virus when going on school trips abroad.

“I am concerned, but at the same time I feel as though there’s not much that I could possibly do,” she said. “ I think what we all have to be doing is monitoring the situation and being very careful.”

The coronavirus has drawn comparisons to the 2003 outbreak of SARS, a similar virus. Bonnington acknowledges the comparison to SARS,  and said that there are similarities between that disease and the coronavirus.

“[SARS] is part of the similar family [as the coronavirus], but it sounds like … the management of the coronavirus is better than what they did with SARS,” he said. Bonnington added that the travel restrictions placed on Wuhan by the Chinese government appear to be containing the epidemic better than China controlled SARS.

The coronavirus epidemic has also caused instances of discriminatory behavior against people of Asian descent, over fears that they may be infected with the illness due to their race. Lowe said that she believes that this reaction is unwarranted.

“Don’t discriminate against Chinese people or anyone who looks Asian just because of the coronavirus,” she said.

Overall, Bonnington stressed the importance of remaining calm despite the impact of the outbreak, especially given that the cases of the virus in the U.K. are currently contained and many deaths from the virus have also been related to other pre-existing medical conditions.

“I think we have to be careful about the fear of this,” he said. “I can understand people are worried about it, but equally we have a responsibility to deal with the facts and trust in the process of how the authorities are managing the spread of this.”