A sonnet to Alicia Keys 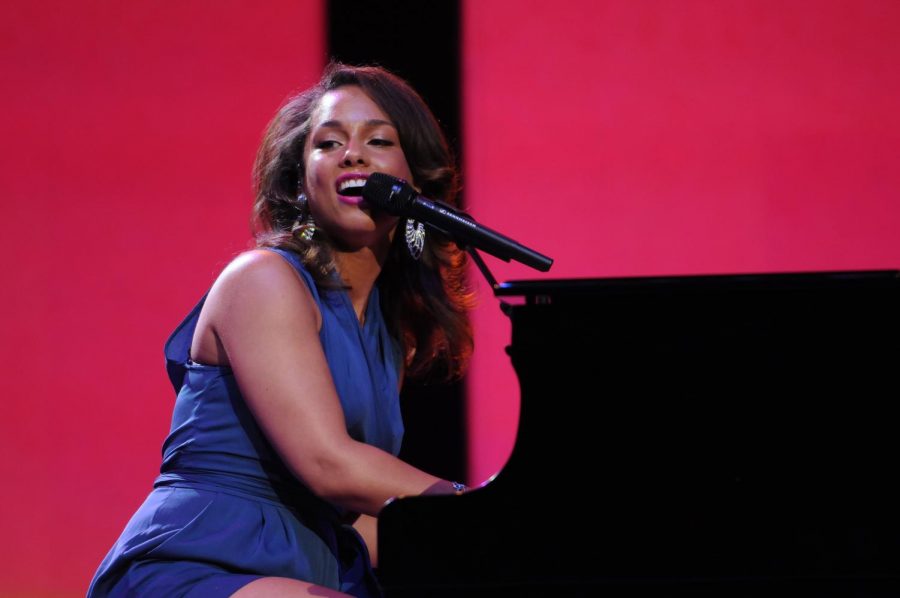 Photo used with permission from walmart/https://www.flickr.com/photos/walmartcorporate/5793373501

Alicia Keys has grown from a starry eyed 15-year-old to a powerful, transformative musician.

Alicia Keys is “history on the turntables.” She is “Nina Simone in the Park;” she is “Harlem in the dark;” she is “the wind when the record spins;” she is the “erratic energy that gets in your skin.” Alicia Keys is unstoppable, and I am one of her apostles.

When I was six, my mom bought a first-generation iPod touch and a pair of thick Apple wire earphones. She could fit 25 songs on her iPod but only two ears in her earbuds. To make listening to the iPod fair, my siblings and I rotated the days on which we could take one earbud and listen with my mom. We were each allowed to choose a special song to play a few times.

On Friday it was my sisters turn, on Saturday it was my brother’s, and on Sunday it was mine. There was one song I remember always choosing on Sunday afternoons with my mom: “Fallin” by Alicia Keys.

The lyrics, the tone, the pitch, the rhythm, the voice, it was all too enchanting, and I never wanted to stop listening. Five years later, I was lucky enough to get my own iPod nano and earbuds, so I finally never had to.

Alicia Keys has been one of my musical heroes since childhood. As I’ve evolved, so has Keys. What I admire most about her is the transformation of her music over time.

Keys signed with Columbia Records at age 15, so she sang about what any fifteen-year-old girl is expected to sing about: love and boys. As Keys has aged and gained respect as a singer, though, she’s been able to explore more personal issues through her music and move past singing about romance.

Her most recent album, HERE, references addiction, feminine beauty standards, and racial inequality. In fact, Keys’ infamous make-up free look began with the advent of this album when a bare-faced photoshoot inspired her to keep her skin natural indefinitely. In an interview, Keys said, “I don’t want to cover up anymore. Not my face, not my mind, not my soul, not my thoughts, not my dreams, not my struggles, not my emotional growth. Nothing.”

When an artist can match their actions with their words, it creates trust –trust in the integrity of the music and trust that they are staying true to their roots, regardless of the perils fame brings. Perhaps this is important to me as I too often witness the change in an artists music from organic and fresh to bland and boring as their fame takes off. Seemingly, Keys has continuously produced songs that are true to her original talent. Even though the lyrics have changed, the melodies have remained polished and refined.

Nevertheless, she is not afraid to take risks in her music, with HERE being one. In songs from the album, like “Blended Family”, Keys has crafted loose and beautiful melodies that are far different from any of her previous songs. The appearance of ASAP Rocky in this specific track borders on pop modernity, however, the low guitar that carries the core of the tune pulls it back into Keys’ classic R&B style. Keys elevated her music to be more dangerous and current without reducing its quality.

My love for her new material does not discount her old records, though. “Superwoman” from the 2007 album “As I am” is my remedy for a bad morning. Getting up in the morning for school can be a feat, especially in these dark winter months. On days when I’m feeling low energy, I will put my AirPods in and turn on “Superwoman” before even opening my eyes. The repeated lyric “I am superwoman” gets into my psyche and forces me to not only start the day, but to be powerful and strong throughout it. Keys manages to evoke feelings of inspiration and strength with many of her songs.

Since “Empire State of Mind” was released in 2009, it has become the anthem for New York City and a treasured favorite of mine. I feel that the mark of a great pop/rap song is when my mother enjoys listening to it, and my mom adores this song. Perhaps it’s because she is from New York City, but if anything, that means the song achieved its purpose: to make New Yorkers feel proud to be from the boroughs.

New York City has always been seen as a booming metropolis boasting freedom, expression, and opportunity. What Keys and Jay Z did with this record was put New York’s reputation into melodies that could be shared and admired by all. Music is universal, and it should unite communities when words cannot. This song is the gold standard for what music should aim to accomplish.

I suppose this article is my sonnet to Keys. It is a love letter that thanks her for being my song on Sundays and pushing me towards finding my passion for music. There isn’t a second during my day when lyrics and harmonies don’t run through my blood. It is Keys who I have to thank for this, and it is Keys who has stayed with me as a trusted confidant when everything around me has changed.